Thanks to a couple of Lauras (Reading in Bed and Dr Laura Tisdall) for making me aware of this tag that has also been going around on BookTube. If you haven’t already taken part and think this looks like fun, why not give it a try?

Goodreads lists the 200 most popular books of any given year. Skim through and see how many you’ve read from the list and discuss whichever ones you like. (I chose not to answer the last two questions of this prompt but have included them at the bottom of the post.)

I browsed a few of the years and found that 2010 contained 12 books that I’ve read, including some that stood out to me for various reasons. For instance, two of them marked the start of my interest in medical-themed reading. I also think of 2010 as when my reading went into ‘mega’ mode, i.e. approaching 200 books per year. (Now it’s more like 320 a year.)

Because the list is based on the number of times a book has been added to users’ shelves (though not necessarily read and rated) on Goodreads, there is a LOT of YA and series fiction, e.g. Mockingjay at #1. Other notable inclusions: Heaven Is for Real by Todd Burpo and Orange Is the New Black before that really took off.

Read at the time:

Medical masterpieces: The Immortal Life of Henrietta Lacks by Rebecca Skloot (#6) and The Emperor of All Maladies: A Biography of Cancer by Siddhartha Mukherjee (#45)

Postmodern, angsty pop culture-filled delights: A Visit from the Goon Squad by Jennifer Egan (#31) and Freedom by Jonathan Franzen (#37). I wonder if they’ve stood the test of time?

Vintage Bryson in curiosity-indulging mode: At Home: A Short History of Private Life by Bill Bryson (#69)

Not his usual sort of thing, but my introduction to him and a damn fine work of historical fiction: The Thousand Autumns of Jacob de Zoet by David Mitchell (#112)

Not my usual sort of thing (sappiness + magic realism), but I read it at a festival and it passed the time: The Particular Sadness of Lemon Cake by Aimee Bender (#116)

Part of my progressive Christian education, but not a great example; not memorable in the least: Radical: Taking Back Your Faith from the American Dream by David Platt (#138)

A joy of a linked short story collection set among expat journalists in Rome; this author hasn’t disappointed me since: The Imperfectionists by Tom Rachman (#156)

Who knew typesetting could be so fascinating?! Just My Type: A Book About Fonts by Simon Garfield (#178)

A brilliant WWII novel, truly among the best of the best: The Invisible Bridge by Julie Orringer (#93)

A DNF: Washington: A Life by Ron Chernow (#73) was way too involved for my level of interest.

#75 The Warmth of Other Suns: The Epic Story of America’s Great Migration by Isabel Wilkerson

#124 Girl in Translation by Jean Kwok

None of these are priorities, but I’d still read them if a copy came my way.

Do you remember any of these 2010 releases with fondness? Which other ones from the list should I read?

The Novel Cure—Bibliotherapy in Action

A good book, read at the right moment, should leave you uplifted, inspired, energized and eager for more. With so many books to choose from, what’s the point of reading even one more that leaves you cold?

I’ve mentioned my interest in bibliotherapy before. Well, for anyone new to the concept or interested in finding out more, The Novel Cure by Ella Berthoud and Susan Elderkin, two of the bibliotherapists at London’s School of Life, is an accessible introduction. Subtitled “An A–Z of Literary Remedies,” this is a learned and at times tongue-in-cheek book of advice about what fiction to read if you’re suffering from any sort of malady – physical, psychological, or imagined. 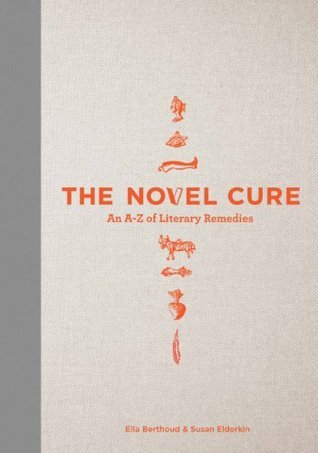 The alphabetical format and “see also” asides make it more like a cross-referenced encyclopedia than a book to read straight through, though I tried it both ways. Initially I flipped through at random, letting one entry take me to another related one and so on, but after a while I went back to the start and caught up on unread entries to finish within a year.

“It helps enormously at times of stress to read about other people who are going through similar things; watching how other people cope or fail to cope will make you feel less alone and give you strength,” the authors write to introduce the “cancer, caring for someone with” entry. I found this to be true when my sister lost her husband to cancer last year. She had never been a reader – apart from celebrity magazines – but in the past year she’s read nearly 90 books, many of them memoirs about illness and bereavement. Books are how I’ve always made sense of the world, so it’s been incredibly gratifying to see her turn to them as well. There are plenty of recommendations I’ll pass on to her from this book, especially “death of a loved one” (After You’d Gone by Maggie O’Farrell and Extremely Loud and Incredibly Close by Jonathan Safran Foer) and “widowed, being” (The Same Sea by Amos Oz and Major Pettigrew’s Last Stand by Helen Simonson).

You’ll be amazed at the range of conditions and circumstances for which the book offers prescriptions. Newly retired? “Bucolic and tranquil, The Enigma of Arrival [by V.S. Naipaul] will encourage you to take stock of your life and enjoy the unfolding of new possibilities.” Workaholic? “Immerse your desiccated soul in something very simple, very rustic, very small. We suggest [Thomas] Hardy’s gentlest, most innocent novel, Under the Greenwood Tree.” Two sections that felt particularly relevant to me as a vertically challenged freelancer were “short, being” and “tax return, fear of doing.” Meanwhile I’ll be pointing my husband to “baldness,” “flying, fear of,” “stress” and “tinnitus” (poor chap). But some of these entries surely resulted from the authors thinking “hey, here’s a great book we have to mention,” and then coming up with a category to fit it into, like “determinedly chasing after a woman even when she’s a nun” for In the Skin of a Lion by Michael Ondaatje. 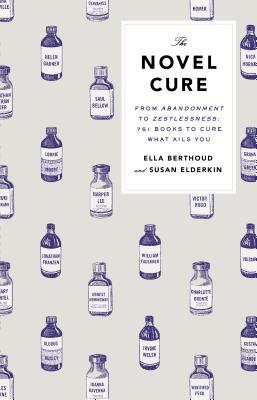 I think I prefer this U.S. cover.

Indeed, there’s a certain levity to this book that I think some reviewers have missed. These aren’t all entirely serious suggestions, though they are all worthwhile books. I especially liked the sections where the authors incorporate pastiche of the book in question. A piece recommending Pamela by Samuel Richardson is in the form of an old-fashioned letter, for example, while “single, being” apes Bridget Jones’s diary entries. They even imitate certain authors’ prose style, as in “Who poses questions without question marks and observes the subtle changes in the light with exquisite brevity.” Answer: J.P. Donleavy, apparently.

The book is also a great source of top ten lists (I’m working through their novels for thirty-somethings) and advice for how to deal with reading crises (e.g. “busy to read, being too” and “giving up halfway through, tendency to”). My only criticism of the book – and this is one I level against many examples from the ‘books about books’ genre – is that there’s a fair bit of plot summary, sometimes so much so that it puts me off reading a book rather than whets my appetite for it.

It’s a bit belated (or early) for suggesting this as a Christmas gift for a book lover, but perhaps you can hand it over as a birthday gift or an anytime present – even to yourself. I got my copy on Amazon for £4, quite a bargain for a book I’ll be returning to again and again over the years.

Do you agree that novels have the power to cure, or at least help with, problems?