Signs of Life: To the Ends of the Earth with a Doctor by Stephen Fabes

Stephen Fabes is an emergency room doctor at St Thomas’s Hospital, London. Not exciting enough for you? Well, he also spent six years of the past decade cycling six continents (so, all bar Antarctica). His statistics are beyond impressive: 53,568 miles, 102 international borders, 1000+ nights of free camping, 26 bicycle tires, and 23 journals filled with his experiences. A warm-up was cycling the length of Chile with his brother at age 19. After medical school in Liverpool and starting his career in London, he found himself restless and again longing for adventure. The round-the-world cycle he planned fell into four sections: London to Cape Town, the West Coast of the Americas, Melbourne to Mumbai, and Hong Kong to home.

Signs of Life is a warm-hearted and laugh-out-loud funny account of Fabes’ travels, achieving a spot-on balance between major world events, the everyday discomforts of long-distance cycling and rough camping, and his humanitarian volunteering. He is a witness to the Occupy movement in Hong Kong, the aftermath of drought and tribal conflict in Africa, and the refugee crisis via the “Jungle” migrant camp in Calais. The desperate situations he saw while putting his medical expertise to good use in short bursts – e.g., at a floating clinic on a Cambodian lake, a malaria research center in Thailand, a leper hospital in Nepal, and a mental health rehabilitation clinic in Mumbai – put into perspective more minor annoyances like fire ants in El Salvador, Indonesian traffic, extreme cold in Mongolia, and camel spiders.

Wherever he went, Fabes met with kindness from strangers, even those who started off seeming hostile – having pitched his tent by a derelict cabin in Peru, he was alarmed to awake to a man pointing a gun at him, but the illicit gold miner soon determined he was harmless and offered him some soup. (Police officers and border guards were perhaps a bit less hospitable.) He also had occasional companions along the route, including a former housemate and a one-time girlfriend. Even limited shared language was enough to form common ground with a stranger-turned-fellow cyclist for a week or so. We get surprising glimpses of how Anglo-American culture permeates the developing world: For some reason, in the ‒Stans everyone’s point of reference when he introduced himself was Steven Seagal.

At nearly 400 pages, the memoir is on the long side, though I can see that it must have felt impossible to condense six years of adventures any further. I was less interested in the potted histories of other famous cyclists’ travels and would have appreciated a clearer sense to the passing of time, perhaps in the form of a date stamp at the head of each chapter. One of my favorite aspects of the book, though, was the use of medical metaphors to link geography to his experiences. Most chapters are titled after health vocabulary; for instance, in “Membranes” he ponders whether country borders are more like scars or cell membranes.

Fabes emphasizes, in a final chapter on the state of the West upon his return in early 2016, that, in all the most important ways, people are the same the world over. Whether in the UK or Southeast Asia, he sees poverty as the major factor in illness, perpetuating the inequality of access to adequate healthcare. Curiosity and empathy are his guides as he approaches each patient’s health as a story. Reflecting on the pandemic, which hit just as he was finalizing the manuscript, he prescribes global cooperation and innovation for this time of uncertainty.

We’re all armchair travelers this year, but this book is especially for you if you enjoy Bill Bryson’s sense of humor, think Dervla Murphy was a badass in Full Tilt, and enjoyed War Doctor by David Nott and/or The Crossway by Guy Stagg. It’s one of my top few predictions for next year’s Wellcome Book Prize – fingers crossed it will go ahead after the 2020 hiatus.

With thanks to Dr Fabes and Profile Books for the free copy for review.

Doing double duty this month as my classics and two of my last few animal-themed summer reading choices are a record of a trek in France and a sleazy novella set in 1930s Hollywood. 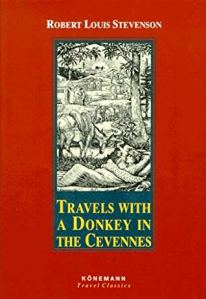 I think I decided this was a must-read because I so love Christopher Rush’s recreation of the journey in To Travel Hopefully. The problem with the original is that there doesn’t seem to have been any particular reason for walking 120 miles in 12 days with a donkey as one’s pack animal and traveling companion. “I have been after an adventure all my life, a pure dispassionate adventurer, such as befell early and heroic voyagers,” Stevenson writes, but of all the options before him this must surely have been one of the safer choices.

As autumn comes on, Stevenson keeps being mistaken for a peddler and meeting religious extremists of various stripes, from Trappist monks to a Plymouth Brother. He stays in shared inn rooms or sleeps outdoors. He learns about the history of religious wars and martyrdom in the region. It’s the sort of material that might have inspired Guy Stagg in writing The Crossway, his account of a secular pilgrimage from Canterbury to Jerusalem. But it’s, for the most part, awfully boring. Rush at least had a good reason for undertaking his journey: after his wife’s death from breast cancer he needed a quest to take his mind off his grief.

But anyway, the donkey. Stevenson buys Modestine for 65 francs and she quickly proves to be a typical stubborn-as creature. Passersby encourage him to find an effective goad and show the beast who’s in charge.

They told me when I left, and I was ready to believe it, that before a few days I should come to love Modestine like a dog. Three days had passed, we had shared some misadventures, and my heart was still as cold as a potato towards my beast of burden. She was pretty enough to look at; but then she had given proof of dead stupidity

Between the early entries and the final ones, though, she is mostly invisible. And, regretfully, Stevenson then has to sell the poor beast again – and for only 35 francs with her saddle. That represents quite a financial loss after less than two weeks!

Ultimately, I prefer reading about Stevenson to reading his actual work. (Other examples: Nancy Horan’s novel Under the Wide and Starry Sky; the chapter of Richard Holmes’s Footsteps: Adventures of a Romantic Biographer in which he recreates the Cévennes trek.) My next Stevenson-themed reading will be The Lighthouse Stevensons by Bella Bathurst.

A lovely line: “to love is the great amulet which makes the world a garden”

Wigtown gets a random mention! As he’s musing on the controversial religious history of the area: “If you met a mixed company in the King’s Arms at Wigton, it is not likely that the talk would run on Covenanters.”

(The e-book is available as a free download from Project Gutenberg, though I read a secondhand copy I’d had for ages.)

Boy oh boy, this is one weird and sordid little book. Like The Great Gatsby, which had been published 14 years before, it shows the seamy underbelly of a glittering American city. Here the setting is Hollywood, where Tod Hackett is a set and costume designer. He’s smitten with his neighbor, Faye Greener, a 17-year-old aspiring actress (“taut and vibrant … shiny as a new spoon”) who’s not above taking a few shifts at the brothel to make ends meet.

Tod is not the only one obsessed with Faye, though; her other suitors include Homer Simpson (so hard to take him seriously because of that name!), a sad sack from Iowa who moved to the California desert for his respiratory health; Earle Shoop the cowboy; and Miguel, a Mexican cock-fighter. Comic relief is provided by Abe Kusich, a gambling dwarf whose slang includes “lard-ass” and “punkola.” The novella opens and ends with mob scenes, but while the first takes place on a studio lot the last is dangerously real.

There are some fairly disturbing elements here. The casual racism is probably to be expected, but the violence of Tod’s fantasies about Faye startled me: “If only he had the courage to wait for her some night and hit her with a bottle and rape her.” But like Daisy Buchanan in Gatsby, Faye is the sort of careless person who will always come out on top – “Nothing could hurt her. She was like a cork.”

West portrays Hollywood as a wasteland of broken dreams: “the dump grew continually, for there wasn’t a dream afloat somewhere which wouldn’t sooner or later turn upon it, having first been made photographic by plaster, canvas, lath, and paint.” This was his final work before he died in a car accident in 1940. I got more out of Miss Lonelyhearts, but I’m still glad I read this Wigtown purchase. I have no idea what the title refers to, though it sounds like it might be a biblical reference.

I’m still plugging away at my last few #20BooksofSummer and plan to write them up for the last day, September 3rd.