This is my fourth year joining Laura Frey and others in reading mostly novellas in November. Last year Laura put together a history of the challenge (here); it has had various incarnations but has no particular host or rules. Join us if you like! (#NovNov and #NovellasinNovember) The definition of a novella is loose – it’s based more on the word count than the number of pages – so it’s up to you what you’d like to classify as one. I generally limit myself to books of 150 pages or fewer, though I might go as high as 180-some if there aren’t that many words on a page. Some, including Laura and Susan, would be as generous as 200. 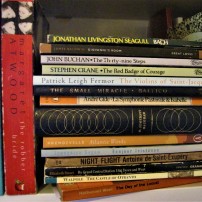 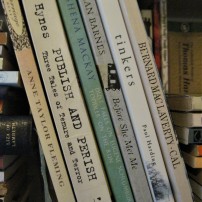 I’ve trawled my shelves for fiction and nonfiction stacks to select from, as well as a few volumes that include several novellas (I’d plan on reading at least the first one) and some slightly longer novels (150–190 pages) for backups. [From the N. West volume, I just have the 52-page novella The Dream Life of Balso Snell, his debut, to read. The Tangye book with the faded cover is Lama.] Also available on my Kindle are The Therapist by Nial Giacomelli*, Record of a Night too Brief by Hiromi Kawakami, Childhood: Two Novellas by Gerard Reve, and Milton in Purgatory by Edward Vass* (both *Fairlight Moderns Novellas, as is Atlantic Winds by William Prendiville).

This is the second year of #MARM, hosted by Canadian bloggers extraordinaires Marcie of Buried in Print and Naomi of Consumed by Ink. This year they’re having a special The Handmaid’s Tale/The Testaments theme, but even if you’re avoiding the sequel, join us in reading one or more Atwood works of your choice. She has so much to choose from! Last year I read The Edible Woman and Surfacing. This year I’ve earmarked copies of the novel The Robber Bride (1993) and Moral Disorder (2006), a linked short story collection, both of which I got for free – the former from the free bookshop where I volunteer, and the latter from a neighbor who was giving it away.

I don’t usually participate in this challenge because nonfiction makes up at least 40% of my reading anyway, but last year I enjoyed putting together some fiction and nonfiction pairings and ‘being the expert’ on women’s religious memoirs, a subgenre I have a couple of books to add to this year. So I will probably end up doing at least one post. The full schedule is here.

Being on the shadow panel for the Sunday Times/PFD Young Writer of the Year Award was a highlight of 2017 for me. I was sad to not be able to attend any of the events last year. I’m excited for this year’s shadow panelists, a couple of whom are blogging friends (one I’ve met IRL), and I look forward to following along with the nominated books and attending the prize ceremony at the London Library on December 5th.

With any luck I will already have read at least one or two books from the shortlist, which is to be announced on November 3rd. I have my fingers crossed for Yara Rodrigues Fowler, Daisy Johnson, Elizabeth Macneal, Stephen Rutt and Lara Williams; I expect we may also see repeat appearances from one of the poets recognized by the Forward Prizes and Guy Gunaratne, the winner of the 2019 Dylan Thomas Prize.

Last-Minute Thoughts on the Booker Longlist

Tomorrow, the 20th, the Man Booker Prize shortlist will be announced. This must be my worst showing for many years: I’ve read just two of the longlisted books, and both were such disappointments I had to wonder why they’d been nominated at all. I have six of the others on request from the public library; of them I’m most keen to read The Overstory and Sabrina, the first graphic novel to have been recognized (the others are by Gunaratne, Johnson, Kushner and Ryan, but I’ll likely cancel my holds if they don’t make the shortlist). I’d read Robin Robertson’s novel-in-verse if I ever managed to get hold of a copy, but I’ve decided I’m not interested in the other four nominees (Bauer, Burns, Edugyan, Ondaatje*).

The Water Cure by Sophie Mackintosh

The first word of The Water Cure may be “Once,” but what follows is no fairy tale. Here’s the rest of that sentence: “Once we have a father, but our father dies without us noticing.” The tense seems all wrong; surely it should be “had” and “died”? From the very first line, then, Sophie Mackintosh’s debut novel has the reader wrong-footed, and there are many more moments of confusion to come. The other thing to notice in the opening sentence is the use of the first person plural. That “we” refers to three sisters: Grace, Lia and Sky. After the death of their father, King, it’s just them and their mother in a grand house on a remote island.

There are frequent flashbacks to times when damaged women used to come here for therapy that sounds more like torture. The sisters still engage in similar sadomasochistic practices: sitting in a hot sauna until they faint, putting their hands and feet in buckets of ice, and playing the “drowning game” in the pool by putting on a dress laced with lead weights. Despite their isolation, the sisters are still affected by the world at large. At the end of Part I, three shipwrecked men wash up on shore and request sanctuary. The men represent new temptations and a threat to the sisters’ comfort zone.

This is a strange and disorienting book. The atmosphere – lonely and lowering – is the best thing about it. Its setup is somewhat reminiscent of two Shakespeare plays, King Lear and The Tempest. With the exception of a few lines like “we look towards the rounded glow of the horizon, the air peach-ripe with toxicity,” the prose draws attention to itself in a bad way: it’s consciously literary and overwritten. In terms of the plot, it is difficult to understand, at the most basic level, what is going on and why. Speculative novels with themes of women’s repression are a dime a dozen nowadays, and the interested reader will find a better example than this one.

Conversations with Friends was one of last year’s sleeper hits and a surprise favorite of mine. You may remember that I was part of an official shadow panel for the 2017 Sunday Times Young Writer of the Year Award, which I was pleased to see Sally Rooney win. So I jumped at the chance to read her follow-up novel, which has been earning high praise from critics and ordinary readers alike as being even better than her debut. Alas, though, I was let down.

Normal People is very similar to Tender – which for some will be high praise indeed, though I never managed to finish Belinda McKeon’s novel – in that both realistically address the intimacy between a young woman and a young man during their university days and draw class and town-and-country distinctions (the latter of which might not mean much to those who are unfamiliar with Ireland).

The central characters here are two loners: Marianne Sheridan, who lives in a white mansion with her distant mother and sadistic older brother Alan, and Connell Waldron, whose single mother cleans Marianne’s house. Connell doesn’t know who his father is; Marianne’s father died when she was 13, but good riddance – he hit her and her mother. Marianne and Connell start hooking up during high school in Carricklea, but Connell keeps their relationship a secret because Marianne is perceived as strange and unpopular. At Trinity College Dublin they struggle to fit in and keep falling into bed with each other even though they’re technically seeing other people.

The novel, which takes place between 2011 and 2015, keeps going back and forth in time by weeks or months, jumping forward and then filling in the intervening time with flashbacks. I kept waiting for more to happen, skimming ahead to see if there would be anything more to it than drunken college parties and frank sex scenes. The answer is: not really; that’s mostly what the book is composed of.

I can see what Rooney is trying to do here (she makes it plain in the next-to-last paragraph): to show how one temporary, almost accidental relationship can change the partners for the better, giving Connell the impetus to pursue writing and Marianne the confidence to believe she is loveable, just like ‘normal people’. It is appealing to see into these characters’ heads and compare what they think of themselves and each other with their awareness of what others think. But page to page it is pretty tedious, and fairly unsubtle.

I was interested to learn that Rooney was writing this at the same time as Conversations, and initially intended it to be short stories. It’s possible I would have appreciated it more in that form.

My thanks to Faber & Faber for the free copy for review.

*I’ve only ever read the memoir Running in the Family plus a poetry collection by Ondaatje. I have a copy of The English Patient on the shelf and have felt guilty for years about not reading it, especially after it won the “Golden Booker” this past summer (see Annabel’s report on the ceremony). I had grand plans of reading all the Booker winners on my shelf – also including Carey and Keneally – in advance of the 50th anniversary celebrations, but didn’t even make it through the books I started by the two South African winners; my aborted mini-reviews are part of the Shiny New Books coverage here. (There are also excerpts from my reviews of Bring Up the Bodies, The Sellout and Lincoln in the Bardo here.)

Last year I’d read enough from the Booker longlist to make predictions and a wish list, but this year I have no clue. I’ll just have a look at the shortlist tomorrow and see if any of the remaining contenders appeal.

What have you managed to read from the Booker longlist? Do you have any predictions for the shortlist?