June hasn’t seen much progress on this project – though I’m currently on my fifth read, Kitchen Confidential by Anthony Bourdain, and enjoying it a lot – so July and August will need to include eight food- and drink-themed books each.

Today I have a reread of a funny (yet more serious than I remembered) favorite and a light collection of mini-essays on the English love affair with particular foodstuffs.

From my original Bookkaholic review from 2013:

Dunn’s debut is a book of letters – in more senses than one. It is a fairly traditional epistolary novel, but also toys with the letters of the alphabet: the wordy citizens of the island nation of Nollop are zealously engaged in creating pangrams (pithy sentences that contain each letter of the alphabet) in tribute to their founder, Nevin Nollop, who authored “The quick brown fox jumps over the lazy dog,” the original pangram displayed in ceramic tiles on his statue in the public square. But things go awry when particular letters start falling off the monument.

A superstitious lot, the Nollop Council decide that the fallen letters can no longer be used, and the characters’ missives become increasingly constrained as they have to avoid certain vowels and consonants. Their writing grows exponentially avant-garde and hilarious as they resort to circumlocutions and phonetic spellings. Before long only L, M, N, O, and P can be used – which, handily, still allows for an approximation of the title character’s name. A madcap journey through the English language and its use in literature: enjoy the ride. 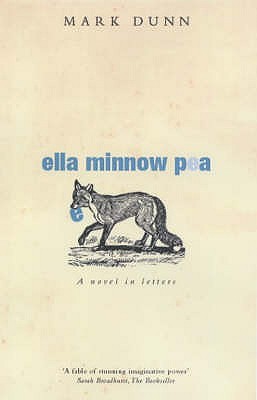 I engaged more with the individual characters: Ella and her parents, aunt and cousin; other members of the community; and a few off-island visitors who lead the research into what’s happening with the letters. I was also struck much more by the political satire: freedom of speech is endangered in a repressive society slavishly devoted to a sacred text. Those who continue to use forbidden letters are turned in by their neighbors or enemies and get 1) a warning, 2) a flogging or time in the headstocks, and 3) banishment. The council members see themselves as interpreting the will of Nollop, and believe the pangram to be a miraculous sentence that can never be bettered – but the citizens prove them wrong by creating a superior example (using only 32 letters, versus the fox’s 35) purely by accident.

A remembered favorite line that my husband and I often quote to each other – “No mo Nollop poop!” – doesn’t exist (it’s actually “No mo Nollop pomp! No mo Nollop poo poo!”). My favorite alternative phrase is “terminal-cot” for deathbed once D is disallowed. I also love the new days of the week: Sunshine, Monty, Toes, Wetty, Thurby, Fribs and Satto-Gatto.

Laugh-out-loud silliness plus a sly message about science and reason over superstition: a rare combination that makes this an enduring favorite. I also recommend Dunn’s Ibid: A Life (2004), which is told entirely through the footnotes of a biography, taking “reading between the lines” to a whole new level. I haven’t enjoyed his other novels as much as these two.

Eating for England by Nigel Slater (2007) 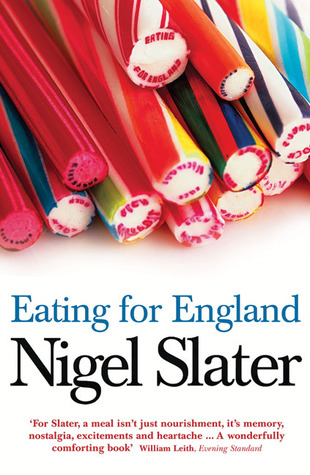 Nigel Slater is a foodie known in the UK for his television programs and newspaper columns.  Not as edgy as Gordon Ramsay, as matey as Jamie Oliver, or as ethically clued-in as Hugh Fearnley-Whittingstall, he doesn’t have a particular shtick. A middle-of-the road, middle-class type, he’s all about simple comfort food. We have a few of his cookbooks.

As in his memoir, Toast (2004), food links in to nostalgia for childhood. In 200 or so essays that range from a paragraph to a few pages in length, Slater extols everything from marmalade to Brussels sprouts. He devotes by far the most time to the sweet stuff, though, considering the respective merits of every type of biscuit, candy, chocolate bar and pudding. There’s a clear love here for teatime treats (“Afternoon tea may be the only meal we take that is purely and utterly for pleasure”) and for stodge (“Is there something in our demeanour, our national psyche, which makes heavy, rather bland food sit so comfortably with us?”).

This was all pleasant, if inconsequential. I enjoy ‘observing the English’-type books because I’m familiar enough to recognize everything but still foreign enough to enjoy the quaintness and contradictions. What rubbed me the wrong way, though, were the arch portraits of kinds of cooks. I don’t often write in my books, but I found myself leaving corrective comments in the margins in a few places, especially on “The Slightly Grubby Wholemeal Cook,” an unhelpful stereotype of the “dirty hippie.” His ideas about hygiene and political correctness are a little off in this one. I also objected to his annoyance at people who won’t simply split the bill after a meal out (I’ll pay for what I ordered, thank you), and his defense of the gollywog used in Robertson’s advertising seems particularly ill judged at the current moment.