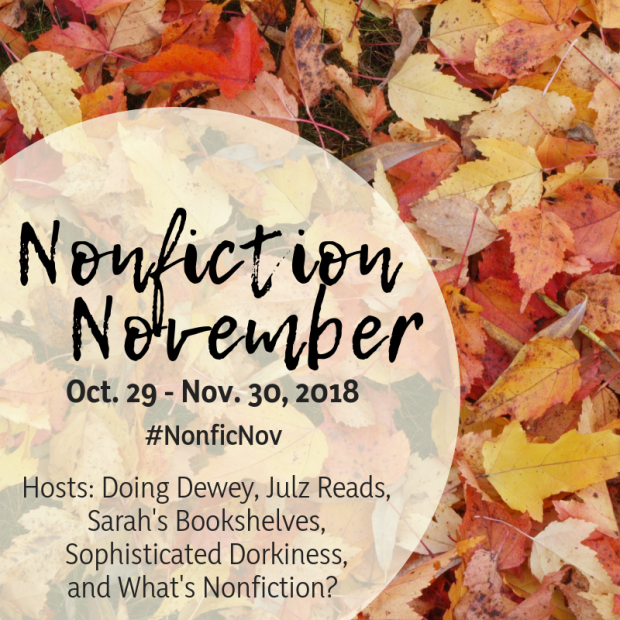 I’d never participated in Nonfiction November before because I tend to read at least 40% nonfiction anyway, but I couldn’t resist the temptation to put together some fiction and nonfiction pairings based on books I’ve read this year and last. (This week of the month-long challenge is posted by Sarah’s Book Shelves, a blog I love for its no-nonsense recommendations of what to read – and what not to read – from the recent U.S. releases.)

My primary example is two books that reveal what it’s really like to have Alzheimer’s disease. Mitchell’s, in particular, is a book that deserves more attention. When it came out earlier this year, it was billed as the first-ever “dementia memoir” (is that an oxymoron?) – except, actually, there had been one the previous year (whoops!): Memory’s Last Breath by Gerda Saunders, which I have on my Kindle and still intend to read. [See also Kate W.’s picks, which include a pair of books with a dementia theme.] 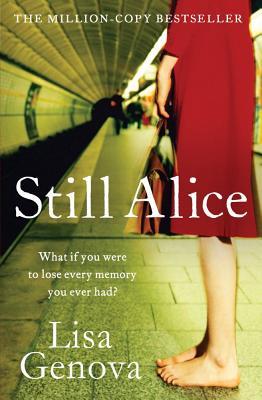 Genova’s writing, Jodi Picoult-like, keeps you turning the pages; I read 225+ pages in an afternoon. There’s true plotting skill to how Genova uses a close third-person perspective to track the mental decline of Harvard psychology professor Alice Howland, who has early-onset Alzheimer’s disease. “Everything she did and loved, everything she was, required language,” yet her grasp of language becomes ever more slippery even as her thought life remains largely intact. I also particularly enjoyed the descriptions of Cambridge and its weather, and family meals and rituals. There’s a certain amount of suspension of disbelief required – Would the disease really progress this quickly? Would Alice really be able to miss certain abilities and experiences once they were gone? – and ultimately I preferred the 2014 movie version, but this would be a great book to thrust at any caregiver or family member who’s had to cope with dementia in someone close to them.

Other fictional takes on dementia that I can recommend: Unforgettable: Short Stories by Paulette Bates Alden, The Only Story by Julian Barnes, Everything Under by Daisy Johnson and Turn of Mind by Alice LaPlante.

A remarkable insider’s look at the early stages of Alzheimer’s. Mitchell took several falls while running near her Yorkshire home, but it wasn’t until she had a minor stroke in 2012 that she and her doctors started taking her health problems seriously. In July 2014 she got the dementia diagnosis that finally explained her recurring brain fog. She was 58 years old, a single mother with two grown daughters and a 20-year career in NHS administration. Having prided herself on her good memory and her efficiency at everything from work scheduling to DIY, she was distressed that she couldn’t cope with a new computer system and was unlikely to recognize the faces or voices of colleagues she’d worked with for years. Less than a year after her diagnosis, she took early retirement – a decision that she feels was forced on her by a system that wasn’t willing to make accommodations for her.

The book, put together with the help of ghostwriter Anna Wharton, gives a clear sense of progression, of past versus present, and of the workarounds Mitchell uses to outwit her disease. The details and incidents are well chosen to present the everyday challenges of dementia. For instance, baking used to be one of Mitchell’s favorite hobbies, but in an early scene she’s making a cake for a homeless shelter and forgets she’s already added sugar; she weighs in the sugar twice, and the result is inedible. By the time the book ends, not only can she not prepare herself a meal; she can’t remember to eat unless she sets an alarm and barricades herself into the room so she won’t wander off partway through.

In occasional italicized passages Mitchell addresses her past self, running through bittersweet memories of all that she used to be able to do: “It amazes me now how you did it, because you didn’t have anyone to help you. You were Mum, Dad, taxi, chef, counsellor, gardener and housekeeper, all rolled into one.” Yet it’s also amazing how much she still manages to do as an ambassador for the Alzheimer’s Society and Dementia Friends. She crisscrosses the country to give speeches, attend conferences, and advise universities; she writes a blog and has appeared on radio to promote this book. Like many retired people, she’s found she’s busier than ever, and her engagements help her to feel purposeful and like she’s giving a positive impression of early-stage dementia. No matter that she has to rely on dozens of reminders to self in the form of Post-It notes, iPad alarms and a wall of photographs.

The story lines of this and Still Alice are very similar in places – the incidents while running, the inability to keep baking, and so on. And in fact, Mitchell reviewed the film and attended its London premiere, where she met Julianne Moore. Her book is a quick and enjoyable read, and will be so valuable to people looking to understand the experience of dementia. She is such an inspiring woman. I thank her for her efforts, and wish her well. This is one of my personal favorites for the shortlist of next year’s Wellcome Book Prize for medical reads.

Other nonfiction takes on dementia that I can recommend: In Pursuit of Memory by Joseph Jebelli and The Summer of the Great-Grandmother by Madeleine L’Engle. 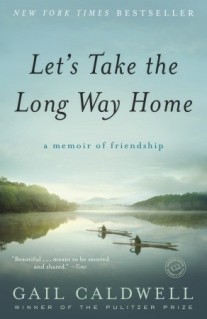 Talk before Sleep by Elizabeth Berg

Portrait of an Addict as a Young Man by Bill Clegg 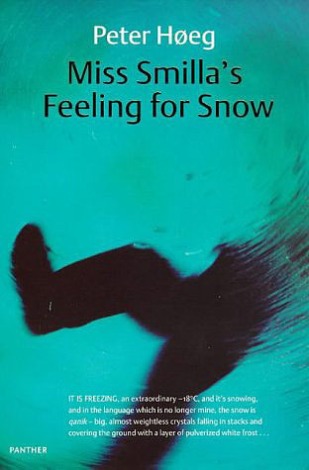 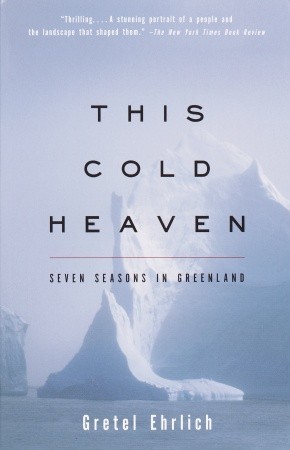 This Cold Heaven by Gretel Ehrlich

Dear Fahrenheit 451: Love and Heartbreak in the Stacks by Annie Spence is chock-full of recommendations and reading pairs. The Novel Cure is also good for this sort of thing, though it is (no surprise) overwhelmingly composed of fiction suggestions.

Somehow the end of the year is less than four weeks away, so it’s time to start getting realistic about what I can read before 2018 begins. I wish I was the sort of person who was always reading books 4+ months before the release date and setting trends, but I’ve only read three 2018 releases so far, and it’s doubtful I’ll get to more than another handful before the end of the year. Any that I do read and can recommend I will round up briefly in a couple weeks or so.

I’m at least feeling pleased with myself for resuming and/or finishing all but two of the 14 books I had on hold as of last month; one I finally DNFed (The Unseen by Roy Jacobsen) and another I’m happy to put off until the new year (Paradise Road: Jack Kerouac’s Lost Highway and My Search for America by Jay Atkinson – since he’s recreating the journey taken for On the Road, I should look over a copy of that first). Ideally, the plan is to finish all the books I’m currently reading to clear the decks for a new year.

Some other vague reading plans for the month:

I might do a Classic of the Month (I’m currently reading The Awakening by Kate Chopin) … but a Doorstopper isn’t looking likely unless I pick up Hillary Clinton’s Living History. However, there are a few books of doorstopper length pictured in the piles below.

Christmas-themed books. The title-less book with the ribbon is Seven Days of Us by Francesca Hornak, a Goodreads giveaway win. I think I’ll start that plus the Amory today since I’m going to a carol service this evening. On Kindle: A Very Russian Christmas, a story anthology I read about half of last year and might finish this year. 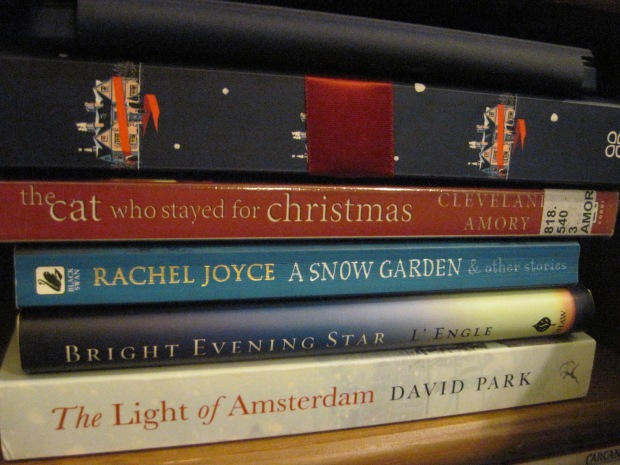 Winter-themed books. On Kindle: currently reading When the Professor Got Stuck in the Snow by Dan Rhodes; Winter by Karl Ove Knausgaard is to be read. (The subtitle of Spufford’s book is “Ice and the English Imagination”.)

As the holidays approach, I start to daydream about what books I might indulge in during the time off. (I’m giving myself 11 whole days off of editing, though I may still have a few paid reviews to squeeze in.) The kinds of books I would like to prioritize are:

Absorbing reads. Books that promise to be thrilling (says the person who doesn’t generally read crime thrillers); books I can get lost in (often long ones). On Kindle: The Bear and the Nightingale by Katherine Arden. 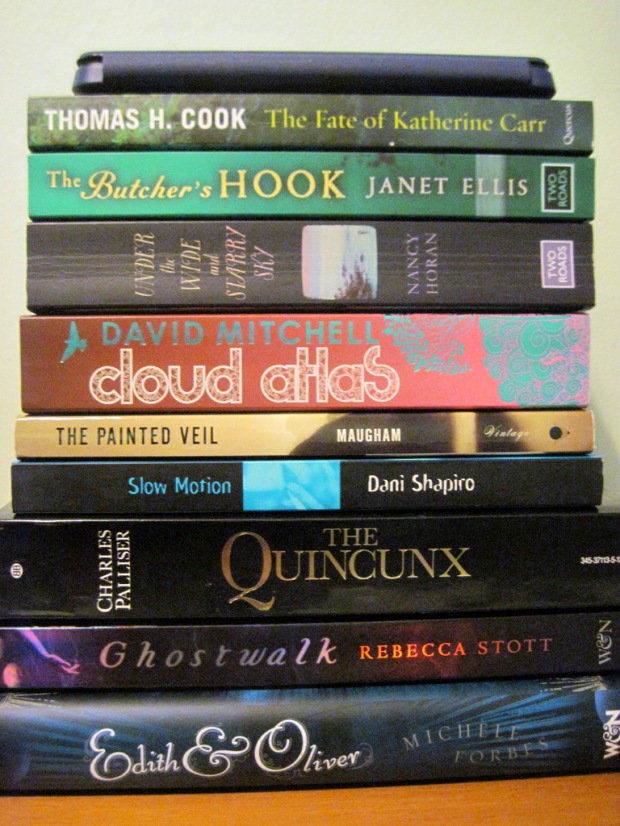 Cozy reads. Animal books, especially cat books, generally fall into this category, as do funny books and children’s books. My mother and I love Braun’s cat mysteries; I read them all starting when I was about 11. I’ve never reread any, so I’d like to see how they stand up years later. Goodreads has been trying to recommend me Duncton Wood for ages, which is funny as I’ve had my eye on it anyway. My husband read the series when he was a kid and we still own some well-worn copies. Given how much I loved Watership Down and Brian Jacques’ novels as a child, I’m hoping it’s a pretty safe bet.

Books I’ve been meaning to read for ages. ’Nuff said. On Kindle: far too many.

And, as always, I’m in the position of wishing I’d gotten to many more of this year’s releases. In fact, there are at least 22 books from 2017 on my e-readers that I still intend to read:

* = The two I most want to read, and thus will try hardest to get to before the end of the year. But the Boyne sure is long.

[The 2017 book I most wanted to read but never got hold of in any form was The Resurrection of Joan Ashby by Cherise Wolas.]

Are there any books from my stacks or lists that you want to put in a good word for?

How does December’s reading look for you?