One of my goals with this blog is to have one convenient place where I can gather together all my writing that has appeared in disparate online locations. To that end, once a month I’ll provide links to all the book reviews I’ve published elsewhere, with a rating (below each description) and a short taster so you can decide whether to click to read more. A couple of exceptions: I won’t point out my Kirkus Indie or BlueInk reviews since I don’t get a byline.

The Past by Tessa Hadley: Four adult siblings gather at their grandfather’s Devon vicarage for one last summer holiday before the house is sold. Their interactions, past and present, skirt the edges of tragedy and show the secrets and psychological intricacies any family harbors. Hadley writes beautifully subtle stories of English family life. Here she channels Elizabeth Bowen with a setup borrowed from The House in Paris: the novel is divided into three parts, titled “The Present,” “The Past,” and “The Present.” That structure allows for a deeper look at what the house and a neighboring cottage have meant to the central family. Hadley writes great descriptive prose and has such insight into family dynamics. Releases September 3rd.

Between Gods by Alison Pick: At a time of transition – preparing for her wedding and finishing her first novel, set during the Holocaust – the author decided to convert to Judaism, the faith of her father’s Czech family. There are so many things going on in this sensitive and engrossing memoir: depression, her family’s Holocaust history, her conversion, career struggles, moving to Toronto, adjusting to marriage, and then pregnancy and motherhood following soon after – leading full circle to a time of postpartum depression. That said, this book is exactly what you want from a memoir: it vividly depicts a time of tremendous change, after which the subject is still somehow the same person, or perhaps more herself than ever.

Villa America by Liza Klaussmann [the full text of my review is available for free this week as part of Editor’s Choice]: In her second novel, Klaussmann explores the glittering, tragic lives of Gerald and Sara Murphy, real-life models for F. Scott Fitzgerald’s Tender Is the Night. The book is slow to start with, with the first third unnecessarily devoted to Gerald’s and Sara’s childhoods and courtship. It is not until the Murphys are established in France and receive visits from fellow artists that the book really comes to life. It is easy to see why the Murphys attracted hangers-on. Yet beneath the façade of glamour, there is real sadness and struggle. Gerald’s uncertain sexuality is a tacit issue between him and Sara, and sickness strikes the family with cruel precision. The novel set up a beautiful contrast between happiness and tragedy.

Stop the Diet, I Want to Get Off! by Lisa Tillinger Johansen: Yo-yo dieters and newbies alike should pick up Johansen’s witty book before wasting any time, money, or heartache on ineffective fad diets. Surveying diets old and new in a conversational style, Johansen gives the merits and dangers of each and suggests realistic principles for healthy eating and exercise. She bases her advice on solid facts, but cannily avoids the dry, scientific tone some experts might use. Instead, she uses chatty, informal language and personal stories to enliven her writing.

The Year of Necessary Lies by Kris Radish: Radish’s tenth novel highlights women’s role in the Audubon Society campaign to eradicate feathers from ladies’ hats. Her fictional heroine, Julia Briton, is a composite portrait of the many courageous women who stood up to plume hunters and the fashion industry alike in the early years of the twentieth century. “I did not simply want to survive, but to live with great passion and to do something that made a difference in the world,” Julia declares. Recommended for fans of Sue Monk Kidd’s The Invention of Wings.

Now and at the Hour of Our Death by Susana Moreira Marques: In 2011 Marques, a freelance journalist, spent five months visiting the dying through a Portuguese home palliative care project. The resulting book falls into two parts: “Travel Notes about Death,” one-line aphorisms and several-paragraph anecdotes; and “Portraits,” case studies and interview transcripts from three families facing the death of a loved one. The lack of a straightforward narrative and the minimal presence of the author mean that the book overall feels disjointed. Nonetheless, it is a thought-provoking look at hospice services and emotions surrounding death. Releases September 3rd.

Caught by Lisa Moore: A classic cat-and-mouse story in which a Canadian drug smuggler escapes from prison to score another load of marijuana from Colombia. Moore paints Slaney and Hearn as “modern-day folk heroes,” and her writing elevates what could have been a plain crime story into real literature. From the title onwards, the book is heavy with foreshadowing as Moore exploits the dramatic irony that readers know the police have a sting operation trailing Slaney the whole way. Indeed, the most remarkable thing about the novel is how it maintains tension even though the outcome seems inevitable. “The best stories … we’ve known the end from the beginning.” To my surprise, Caught is not just a good old-fashioned adventure story, but also has the epic, tragic weight of Homer’s Odyssey.

Field Notes from the Edge by Paul Evans: A book full of unexpected nuggets of information and inspiration: in addition to the travel notes and field observations, Evans (who writes a Guardian country diary from Wenlock Edge, Shropshire) incorporates personal anecdote, folk songs, myths and scientific advances. His central idea is that we have lost our connection with nature due to fear – “ecophobia,” the opposite of which is E.O. Wilson’s “biophilia.” How do we overcome that fear? Mostly by doing just what Evans does: spending time in nature, finding beauty and developing an affinity for particular places and species.

The Ecliptic by Benjamin Wood: Portmantle is a mysterious artists’ retreat center on a Turkish island. Our narrator, Elspeth Conroy (aka Knell), is a Scottish painter who came to Portmantle in 1962 after some struggles with mental illness. The first third of the novel is tremendously gripping and Gothic. The core of the book, nearly 200 pages, is a flashback to Elspeth’s life before. At last, after what feels like too long a digression, we come full circle back to Portmantle. I didn’t warm to The Ecliptic quite as much as I did to Wood’s debut, The Bellwether Revivals. Still, it’s really interesting to see how he alternates between realism and surrealism here. The parts that feel most real and immediate and the parts that are illusory are difficult to distinguish between. An odd, melancholy, shape-shifting novel.

We Love This Book

Beneath the Bonfire by Nickolas Butler: Ten tales of moral complexity in America’s gritty heartland. Fire and recreational drugs are powerful forces linking these Wisconsin-set stories. Opener “The Chainsaw Soirée” sets the tone by describing a failed utopia reminiscent of Lauren Groff’s Arcadia. The stand-out is “Morels,” in which three stoned friends go foraging for mushrooms in their dying rural community. The title’s similarity to “morals” is no coincidence: when the trio are involved in a hit-and-run they have to decide what to stand for. Unsentimental but lyrically composed, these stories will appeal to fans of Ron Rash.

Among the Ten Thousand Things by Julia Pierpoint: Pierpont’s ambitiously structured debut novel explores how infidelity affects a whole New York City family. In short sections of matter-of-fact statements Pierpont gives a what-happened-next for each of the characters over the next decade or so. But “it’s the between-time that lasted,” Pierpoint argues as she returns to that summer of revelations for a closer look. The climactic events of the holiday contrast childhood innocence and adulthood; when you’re on the cusp, certain experiences can push you over the brink from one to the other. This offbeat take on the dysfunctional family novel should interest fans of Nicole Krauss or Rebecca Dinerstein (The Sunlit Night). [Few extra thoughts at Goodreads.]

I also post reviews of most of my casual reading and skimming on Goodreads. 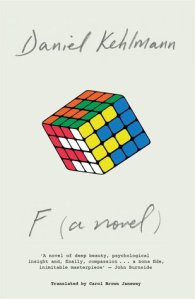 F: A Novel by Daniel Kehlmann: What does F stand for? Faith, finances, fraud, forgery, family and Fate all play a role in Kehlmann’s fourth novel available in English translation. F is also for the Friedlands: Arthur the unreliable patriarch; Martin, a portly Catholic priest who doesn’t believe in God; and his twin half-brothers, Eric and Ivan, a mentally ill businessman and a homosexual painter who forges his mentor’s masterworks. Reading this brilliant, funny spoof on the traditional family saga is like puzzling out a Rubik’s Cube: it is a multi-faceted narrative with many meanings that only become clear the deeper you go. (Full review in September/October 2015 issue of Third Way magazine.)

Mrs. Engels by Gavin McCrea: I generally love Victorian-set historical fiction and books about famous wives, so I was surprised by how little I liked this novel about Lizzie Burns, the illiterate, working-class Irish woman who was Frederick Engels’ longtime partner. The novel flits between 1870–1, when Lizzie and Frederick were newly arrived in London and involved in helping the poor and Franco-Prussian War refugees, and their earlier years in Manchester. Lizzie is a no-nonsense first-person narrator, and her coarse, questionably grammatical speech fits with her background. Unfortunately, I never warmed to Lizzie or felt that she was giving a truly intimate look at her own life. This novel had such potential to bring an exciting, revolutionary time to life, but it never fulfilled its promise for me. Releases in the States on October 13th.

Rank by Aaron McCollough: Some nice alliteration and pleasant imagery of flora, fauna and musical instruments. However, I struggled to find any overarching meaning in these run-on poems. In fact, I could not tell you what a single one of them is actually about. Story is just as important as sound in poetry, I feel, and in that respect this collection was lacking. Releases September 1st.

Trout’s Lie by Percival Everett: “The line of time / Is past. / The line folds back, / Splits. / Two lines now, future, present. The past / Is a circle of / Abstraction, regret.” There is a lot of repetition and wordplay in these poems. The title piece uses a line in Italian from Dante – translating to “in the middle of our life’s path” – that forms another recurring theme: being stuck between times or between options and having to decide which way to go. These read quickly, with the run-on phrases flowing naturally from topic to topic. I’m not sure this was the best introduction to a prolific author I’d never heard of; I’ll have to look into his other work. Releases October 15th.

Bandersnatch by Erika Morrison: This is Christian self-help, an ideal read for fans of Glennon Doyle Melton and Rob Bell. The title, a creature from Lewis Carroll’s imagination, is Morrison’s shorthand for a troublemaker. She argues that as Christians we should be following Jesus down the road of “positive nonconformity”: taking an avant-garde approach to life, turning ordinary moments into divine opportunities through spiritual alchemy, taking an interest in the least of these with kingdom anthropology, and making the everyday trials of marriage and parenthood our works of art. I liked the book best when Morrison illustrated her points with stories from her own life. Overall I found the book repetitive, and the language can definitely be hippy-dippy in places. Releases October 6th.

Family Values by Wendy Cope: Cope mostly uses recognizable forms (villanelles, sonnets, etc.): this is interesting to see in contemporary poetry, but requires a whole lot of rhyming, most of it rather twee (e.g. “tuppence/comeuppance”), which gives the whole collection the feeling of being written for children. My two favorites were “Lissadell,” about a vacation to Ireland, and “Haiku,” perfect in its simplicity:

A perfect white wine
is sharp, sweet and cold as this:
birdsong in winter.