Each September I make a special effort to read short stories, which otherwise tend to languish on my shelves and TBR unread. After my first four reviewed last week, I have another three wonderfully different collections, ranging from bittersweet children’s fantasy in translation to offbeat, wordplay-filled love notes via linked stories suffused with desire and desperation.

[Trans. from the Swedish by Thomas Warburton] 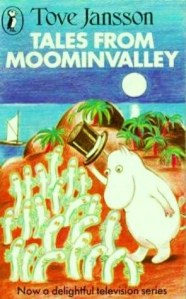 I only discovered the Moomins in my late twenties, but soon fell in love with the quirky charm of Jansson’s characters and their often melancholy musings. Her stories feel like they can be read on multiple levels, with younger readers delighting in the bizarre creations and older ones sensing the pensiveness behind their quests. There are magical events here: Moomintroll discovers a dragon small enough to be kept in a jar; laughter is enough to bring a fearful child back from literal invisibility. But what struck me more was the lessons learned by neurotic creatures. In “The Fillyjonk who believed in Disasters,” the title character fixates on her belongings—

“we are so very small and insignificant, and so are our tea cakes and carpets and all those things, you know, and still they’re important, but always they’re threatened by mercilessness…”

—but when a gale and a tornado come and sweep it all away, she experiences relief and joy:

“the strange thing was that she suddenly felt quite safe. It was a very strange feeling, and she found it indescribably nice. But what was there to worry about? The disaster had come at last.”

My other favourite was “The Hemulen who loved Silence.” After years as a fairground ticket-taker, he can’t wait to retire and get away from the crowds and the noise, but once he’s obtained his precious solitude he realizes he needs others after all. The final story, “The Fir Tree,” is a lovely Christmas one in which the Moomins, awoken midway through their winter hibernation, get caught up in seasonal stress and experience the holiday for the first time. (Public library)

Real Life was one of my five favourite novels of 2020, and we are in parallel fictional territory here. Lionel, the protagonist in four of the 11 stories, is similar to Wallace insomuch as both are gay African Americans at a Midwestern university who become involved with a (straight?) white guy. The main difference is that Lionel has just been released from hospital after a suicide attempt. A mathematician (rather than a biochemist like Wallace), he finds numbers soothingly precise in comparison to the muddle of his thoughts and emotions.

In the opening story, “Potluck,” he meets Charles, a dancer who’s dating Sophie, and the three of them shuffle into a kind of awkward love triangle where, as in Real Life, sex and violence are uncomfortably intertwined. It’s a recurring question in the stories, even those focused around other characters: how does tenderness relate to desire? In the throes of lust, is there room for a gentler love? The troubled teens of the title story are “always in the thick of violence. It moves through them like the Holy Ghost might.” Milton, soon to be sent to boot camp, thinks he’d like to “pry open the world, bone it, remove the ugly hardness of it all.”

Elsewhere, young adults face a cancer diagnosis (“Mass” and “What Made Them Made You”); a babysitter is alarmed by her charge’s feral tendencies (“Little Beast”); and same-sex couples renegotiate their relationships (Simon and Hartjes in “As Though That Were Love” and Sigrid and Marta in “Anne of Cleves,” one of my favourites). While the longer Lionel/Charles/Sophie stories, “Potluck” and “Proctoring,” are probably the best and a few others didn’t make much of an impression, the whole book has an icy angst that resonates. Taylor is a confident orchestrator of scenes and conversations, and the slight detachment of the prose only magnifies his characters’ longing for vulnerability (Marta says to Sigrid before they have sex for the first time: “I’m afraid I’ll mess it up. I’m afraid you’ll see me.” To which Sigrid replies, “I see you. You’re wonderful.”). (New purchase, Forum Books)

A bonus story: “Oh, Youth” was published in Kink (2021), an anthology edited by Garth Greenwell and R.O. Kwon. I requested this from NetGalley just so I could read the stories by Carmen Maria Machado and Brandon Taylor. All of Taylor’s work feels of a piece, such that his various characters might be rubbing shoulders at a party – which is appropriate because the centrepiece of Real Life is an excruciating dinner party, Filthy Animals opens at a potluck, and “Oh, Youth” is set at a dinner party.

Grisha is here with Enid and Victor, his latest summer couple. He’s been a boytoy for hire since his architecture professor, Nate, surprised him by inviting him into his open marriage with Brigid. “His life at the time was a series of minor discomforts that accumulated like grit in a socket until rotation was no longer possible.” The liaisons are a way to fund a more luxurious lifestyle and keep himself in cigarettes.

Attrib. and Other Stories by Eley Williams (2017)

After enjoying her debut novel, The Liar’s Dictionary, this time last year, I was pleased to find Williams’s first book in a charity shop last year. Her stories are brief (generally under 10 pages) and 15 of the 17 are first-person narratives, often voiced by a heartbroken character looking for the words to describe their pain or woo back a departed lover. A love of etymology is patent and, as in Ali Smith’s work, the prose is enlivened by the wordplay.

The settings range from an art gallery to a beach where a whale has washed up, and the speakers tend to have peculiar careers like an ortolan chef or a trainer of landmine-detecting rats. My favourite was probably “Synaesthete, Would Like to Meet,” whose narrator is coached through online dating by a doctor.

I found a number of the stories too similar and thin, and it’s a shame that the hedgehog featured on the cover of the U.S. edition has to embody human carelessness in “Spines,” which is otherwise one of the standouts. But the enthusiasm and liveliness of the language were enough to win me over. (Secondhand purchase from the British Red Cross shop, Hay-on-Wye – how fun, then, to find the line “Did you know Timbuktu is twinned with Hay-on-Wye?”)

I’ll have one more set of short story reviews coming up before the end of the month, with a few other collections then spilling into October for R.I.P.

2016 Runners-Up and Other Superlatives

Let’s hear it for the ladies! In 2016 women writers accounted for 9 out of my 15 top fiction picks, 12 out of my 15 nonfiction selections, and 8 of the 10 runners-up below. That’s 73%. The choices below are in alphabetical order by author, with any full reviews linked in. Many of these have already appeared on the blog in some form over the course of the year.

Hag-Seed by Margaret Atwood: Atwood looks more like a good witch every year, and here she works her magic on The Tempest to produce the most satisfying volume of the Hogarth Shakespeare series yet. There’s a really clever play-within-the-play-within-the-play thing going on, and themes of imprisonment and performance resonate in multiple ways.

The Atomic Weight of Love by Elizabeth J. Church: In Church’s debut, an amateur ornithologist learns about love and sacrifice through marriage to a Los Alamos physicist and a relationship with a Vietnam veteran. I instantly warmed to Meri as a narrator and loved following her unpredictable life story.

We Love You, Charlie Freeman by Kaitlyn Greenidge: The Freemans are raising Charlie, a chimpanzee, as part of their family for a Toneybee Institute experiment and teaching him to communicate via sign language. This is a rich and unsettling story of human–human interactions, even more so than human–animal interactions; it’s a great first novel and I will follow Greenidge’s career with interest.

To the Bright Edge of the World

by Eowyn Ivey: Ivey’s intricate second novel weaves together diaries, letters, photographs, and various other documents and artifacts to tell the gently supernatural story of an exploratory mission along Alaska’s Wolverine River in 1885 and its effects through to the present day. I can highly recommend this rollicking adventure tale to fans of historical fiction and magic realism.

This Must Be the Place

by Maggie O’Farrell: Spreading outward from Ireland and reaching into every character’s past and future, this has all O’Farrell’s trademark insight into family and romantic relationships, as well as her gorgeous prose and precise imagery. I have always felt that O’Farrell expertly straddles the (perhaps imaginary) line between literary and popular fiction; her books are addictively readable but also hold up to critical scrutiny.

by Ann Patchett: This deep study of blended family dynamics starts with an early 1960s christening party Los Angeles policeman Fix Keating is throwing for his younger daughter, Franny; we see the aftermath of that party in the lives of six step-siblings in the decades to come. This is a sophisticated and atmospheric novel I would not hesitate to recommend to literary fiction fans in general and Patchett fans in particular.

The Last Painting of Sara de Vos by Dominic Smith: Jessie Burton, Tracy Chevalier and all others who try to write historical fiction about the Netherlands in the seventeenth century, eat your hearts out. Such a beautiful epoch-spanning novel about art and regret.

Shelter by Jung Yun: A Korean-American family faces up to violence past and present in a strong debut that offers the hope of redemption. I would recommend this to fans of David Vann and Richard Ford.

I Will Find You

by Joanna Connors: By using present-tense narration, Connors makes the events of 1984 feel as if they happened yesterday: a blow-by-blow of the sex acts forced on her at knife-point over the nearly one-hour duration of her rape; the police reports and trials; and the effects it all had on her marriage and family. This is an excellent work of reconstruction and investigative reporting.

Another Day in the Death of America by Gary Younge: Younge built this book by choosing a 24-hour period (November 22 to 23, 2013) and delving into all 10 gun deaths of young Americans on record for that time: seven black, two Latino, and one white; aged nine to 18; about half at least vaguely gang-related, while in two – perhaps the most crushing cases – there was an accident while playing around with a gun. I dare anyone to read this and then try to defend gun ‘rights’ in the face of such senseless, everyday loss.

Best Discoveries of the Year: Apollo Classics reprints (I reviewed three of them this year); Diana Abu-Jaber, Linda Grant and Kristopher Jansma.

Most Pleasant Year-Long Reading Experience: The seasonal anthologies issued by the UK Wildlife Trusts and edited by Melissa Harrison (I reviewed three of them this year).

Most Improved: I heartily disliked Sarah Perry’s debut novel, After Me Comes the Flood. But her second, The Essex Serpent, is exquisite.

The Year’s Biggest Disappointments: Here I Am by Jonathan Safran Foer, Today Will Be Different by Maria Semple, and Swing Time by Zadie Smith. Here’s hoping 2017 doesn’t bring any letdowns from beloved authors.

The Worst Book I Read This Year: Paulina & Fran (2015) by Rachel B. Glaser. My only one-star review of the year. ’Nuff said?

*Haven’t been able to find anywhere yet; the rest are on my Kindle.

Which of these should I get reading on the double?

Coming tomorrow: Some reading goals for 2017.