A Keeper of Records: What’s Worth Saving?

It’s safe to say that book bloggers love lists: not only do we keep a thorough list of everything we read in a year, but we also leap to check out every new top 5/10/50/100 or thematic book list that’s posted so we can see how many of them we’ve read. And then, at the end of any year, most of us put together our own best-of lists, often for a number of categories.

When I was younger, though, I took the list-making to an extreme. As I was going back through boxes of mementos in America a few weeks ago, I found stacks of hand-written records I’d kept. Here’s a list of what I used to list:

Age 14 (1997-8) was the peak of my record-keeping, and the only year when I faithfully kept a diary. I cringe to look back at all this now. Most of the dreams are populated by my crushes of the time, names and faces that mean nothing to me now. And to think that I was so self-conscious and deluded to assume people at school might notice if I wore a shirt twice within a couple of weeks! My diary isn’t particularly illuminating from this distance, either; mostly it brings back how earnest and pious I was in my teens. It’s occasionally addressed in the second person, as if to an imaginary bosom friend who would know me as well as I knew myself.

What’s clear is that I was convinced that the minutiae of my life mattered. Between us, my mother and I had kept a huge cache of my schoolwork and craft projects from kindergarten right through graduate school. I was also a devoted collector – of stamps, coins, figurines, tea sets, shells, anything with puffins or llamas – so I obviously felt that physical objects had real importance, too. It’s a wonder I didn’t become an archivist or a museum curator.

Why did I save all this stuff in the first place? Even as a teen, was I imagining an illustrious career for myself and some future biographer who would gleefully mine my records and personal writings for clues to who I really was? I’m not sure whether to admire the confidence or deplore the presumption. We all want to believe we’re living lives of significance, but when I take a long view – if I never have a child … if I never publish a book (though I think I will) … if human society does indeed collapse by 2050 (as some are predicting) – it’s hard to see what, if anything, will be preserved of my time on earth.

This is deeper than I usually get in a blog post, but these are the sorts of thoughts that preoccupy me when I’m not just drifting along in life’s routines. My nieces’ and nephews’ generation may be the last to inhabit this planet if we don’t take drastic and immediate action to deal with the environmental crisis. Many are working for change (my husband, a new Town Councillor, recently voted for the successful motion to declare a climate emergency and commit Newbury to going carbon-neutral by 2030), but some remain ignorant that there is any kind of problem and so consume and dispose like there is (literally) no tomorrow.

My home is a comfortable bubble I hardly ever leave, but more and more I feel that I need to become part of larger movements: first to ensure the continuation of human and non-human existence; then to improve the quality of human life, especially for those who have contributed least to climate change but will suffer the most from it. I have no idea what form my participation should take, but I know that focusing on outside causes will mean less time obsessing about myself and my inconsequential problems.

That’s not to say I won’t listen to the angst that’s telling me I’m not living my life as fully as I should, but I know that working with others, in whatever way, to tackle global issues will combat the lack of purpose that’s been plaguing me for years.

Appreciation for my past can only help with bolstering a healthy self-image, so I’ve kept a small selection of all those records, and a larger batch of school essays and assignments. Even if this archive is only ever for me, I like being able to look back at the well-rounded student I was – I used to get perfect scores on calculus tests and chemistry lab reports! I could write entire papers in French! – and see the seeds of the sincere, meticulous book lover I still am. As Eve Schaub writes in Year of No Clutter, “I’m not about to stop collecting my own life. It has been a source of pleasure for me ever since I can remember; it helps define me.”

A selection of favorite mementos I discovered back in the States: 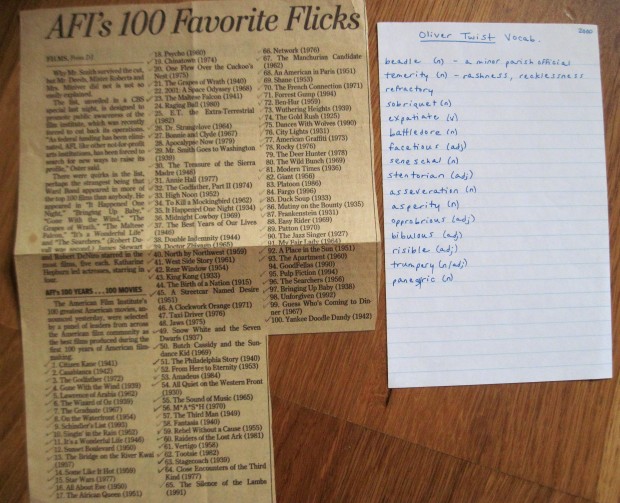 In high school I started making my way through the American Film Institute’s list of Top 100 movies. I’ve now seen 89 of them.

I kept a list of new vocabulary words encountered in novels, especially Victorian ones. Note trumpery: (noun) attractive articles of little value or use; (adjective) showy but worthless – how apt! 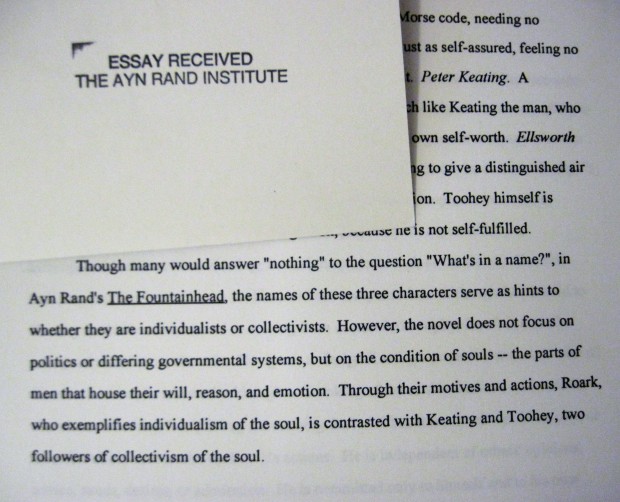 As a high school senior, I waded through Ayn Rand’s The Fountainhead to write an essay that won me an honorable mention, a point of interest on my college applications. Though I find it formulaic now, it’s a precursor to a career partially devoted to writing about books. 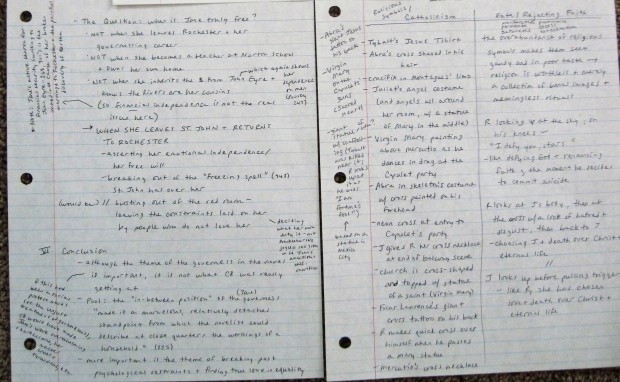 I planned my every college paper via incredibly detailed outlines. (I’m far too lazy to do this for book reviews now!) Can you work out what these essays were about? 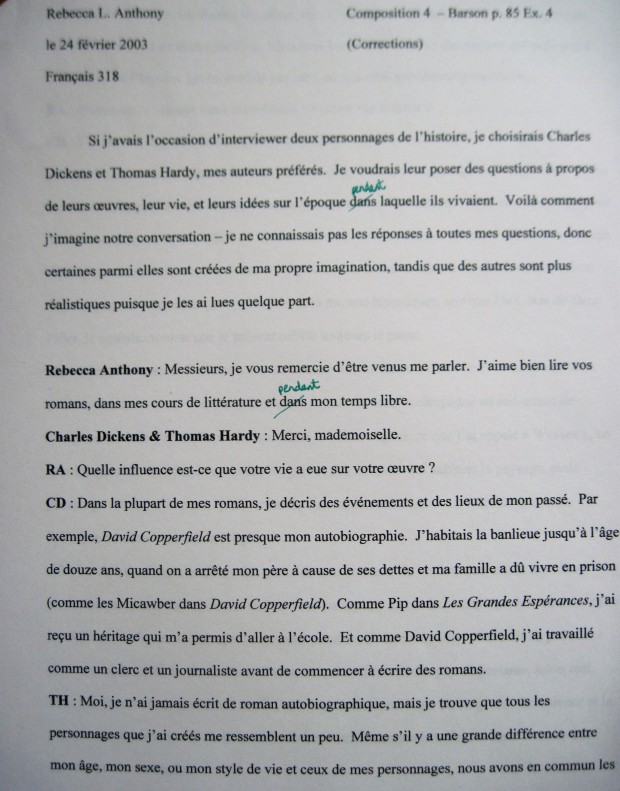 As a college sophomore I wrote weekly essays in what looks like pretty flawless French. This one was an imagined interview with Charles Dickens and Thomas Hardy about the autobiographical and religious influences on their fiction.

Are you a list keeper? Do you have a personal ‘archive’?

How do you balance a healthy self-regard with working for the good of the world?

Despite my largely successful resolution to focus on my own books for the summer, I’ve also gotten through plenty of e-books from NetGalley and Edelweiss, too. I just find it easier to fit time with the Kindle into my day, whether it’s 20 minutes over lunch (food-themed nonfiction works particularly well for such situations) or 30 minutes on the cross trainer. Here’s a sample of the e-books I’ve enjoyed this summer: four nonfiction and one fiction.

Pancakes in Paris: Living the American Dream in France 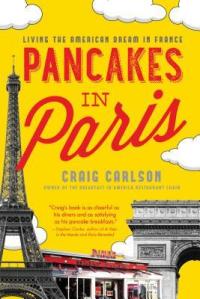 A good-natured memoir about the travails of opening the first American-style diner in Paris. Carlson charts his somewhat chaotic growing-up years in Connecticut, the college study abroad experience that kindled his love for France, his years trying to make it as a screenwriter and director in Hollywood, his long-held dream of opening Breakfast in America, and finding a French sweetheart of his own. Much of the book is devoted to a blow-by-blow of the bureaucratic nightmare of opening a restaurant, starting with getting investors on board and continuing through France’s ridiculously restrictive labor laws. (The impression I came away with was: France – great place to be an employee or rent property; terrible place to start a business.) Next time I’m in Paris, I will be looking to get myself a stack of his signature blueberry and white chocolate chip pancakes. Releases September 6th.

When in French: Love in a Second Language 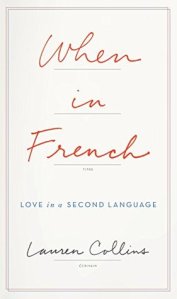 Collins, a journalist from North Carolina, married a Frenchman named Olivier she met while working in London. They then moved to Geneva, a mutually unfamiliar place but one where French reigned. For the first time, she was forced to learn a new language to survive. I love how she blends her own story with the philosophy, history and science behind language use. As she learned how to do things she never expected to have to in French – deal with her in-laws and give birth, for instance – she developed a new appreciation for the marvel that is bilingualism and pondered whether she was the same person in a different language. My favorite section recounts a holiday to Corsica that brought her family and Olivier’s into close quarters and cast her in the unforeseen role of translator. There’s a surprising amount of linguistic detail here, but Collins incorporates it well. Releases September 13th.

A Body, Undone: Living On After Great Pain 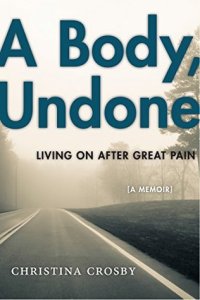 Crosby teaches English and gender studies at Wesleyan University. Her inclusion in this “Sexual Cultures” series has to do with her lesbian feminist ideology but also the new understanding of her body an accident forced upon her at age 50. While she was cycling, a stick stuck in her spokes and she fell over onto concrete, breaking vertebrae in her neck that damaged her spinal cord. In the midst of a full and physical life, she became a quadriplegic. The great irony was that in this she joined her brother Jeff, whose MS had long since reduced him to a wheelchair. Here, in a memoir written 11 years after the accident, she reflects on chronic pain and new limitations – even including bowel habits – with blunt honesty as well as literary allusions. Along the way she remembers physical pleasures now denied to her. Nonetheless, she never comes across as sorry for herself. I found this to be highly absorbing. 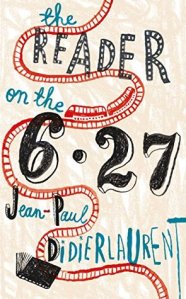 Guylain Vignolles works in a paper pulping plant. Rather than an enemy of books, however, he’s really a champion of the written word and its power to improve people’s lives. Every day when he descends into the belly of “The Thing” to clean it, he rescues the stray pages that escaped destruction and reads them aloud the following morning on his twenty-minute train commute, or to the residents of an old-folks home, no matter what their subject. He also helps his disabled former colleague Giuseppe stockpile all the books made from the recycled paper created on the fateful day the machine shredded his legs. There’s a charming Amélie vibe to this short novel, especially in the later chapters when Guylain sets off on a romantic quest to find the lavatory attendant whose wry diary he finds on a memory stick on the train. Most of the subplots could do with some expanding, but it’s a pleasant and super-quick read.

Stir: My Broken Brain and the Meals that Brought Me Home 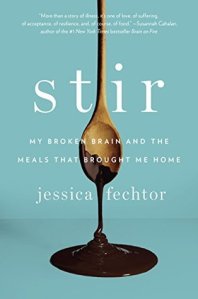 For me this is right up there with Molly Wizenberg and Ruth Reichl in how the author merges food writing with a frank recounting of personal experiences with crisis and heartache. At age 28 Fechtor, then a graduate student in history and Yiddish, collapsed on a treadmill with a brain bleed. Surgery to clip the aneurysm left her blind in one eye. During her long recovery process she started a food blog. At the end of each chapter she shares recipes that alternate between simple, favorite dishes and more involved ones. It’s that unpretentiousness that really endears her to me. She doesn’t think she was particularly brave in getting through an unwanted illness; nor does she think the perfect almond macaroon or cherry clafoutis is beyond anyone’s capability. Instead, she gives a glimpse into an ordinary life turned upside down and the foods that helped her regain a zest for life.