The Swansea University International Dylan Thomas Prize recognizes the best published work in the English language written by an author aged 39 or under. All literary genres are eligible, so the longlist contained poetry collections as well as novels and short stories. Remaining on the shortlist are these six books (five novels and one short story collection; four of the works are debuts):

It’s an American-dominated set this year, but, refreshingly, five of the six nominees are women or non-binary. I happen to have already read the last three of the novels on the list. I’m most keen to try Alligator and Other Stories and Kingdomtide and hope to still have a chance to read them. No review copies reached me in time, so today I’m giving an overview of the list.

This is never an easy prize to predict, but if I had to choose between the few that I’ve read, I would want Kate Elizabeth Russell to win for My Dark Vanessa. 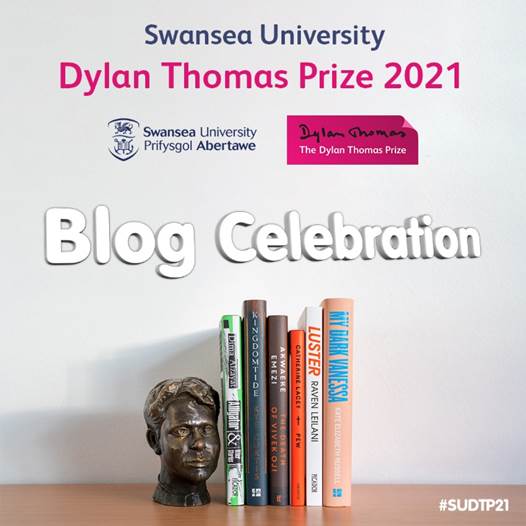 (The remaining information in this post comes from the official Midas PR press release.)

“This year’s winner will be revealed at a virtual ceremony on 13 May, the eve of International Dylan Thomas Day.”

Namita Gokhale, Chair of Judges, says: “We are thrilled to present this year’s extraordinary shortlist – it is truly a world-class writing showcase of the highest order from six exceptional young writers. I want to press each and every one of these bold, inventive and distinctive books into the hands of readers, and celebrate how they challenge preconceptions, ask new questions about how we define identity and our relationships, and how we live together in this world. Congratulations to these tremendously talented writers – they are master storytellers in every sense of the word.”

Francesca Rhydderch on Alligator and Other Stories by Dima Alzayat: “Dima Alzayat’s visceral, innovative Alligator & Other Stories marks the arrival of a major new talent. While the range of styles and stories is impressively broad, there is a unity of voice and tone here which must have been so very difficult to achieve, and a clear sense that all these disparate elements are part of an overriding, powerful examination of identity.”

Joshua Ferris on Kingdomtide by Rye Curtis: “Kingdomtide is a propulsively readable and frequently very funny book about the resources, personal and natural, necessary to survive a patently absurd world. The winning voice of Texas-native Cloris Waldrip artfully takes us through her eighty-eight-day ordeal in the wilds of Montana as the inimitable drunk and park ranger Debra Lewis searches for her. This fine novel combines the perfect modern yarn with something transcendent, lyrical and wise.”

Francesca Rhydderch on Pew by Catherine Lacey: “In this brilliant novel Catherine Lacey shows herself to be completely unafraid as a writer, willing to tackle the uglier aspects of a fictional small town in America, where a stranger’s refusal to speak breeds paranoia and unease. Beautifully written, sharply observed, and sophisticated in its simplicity, Pew is a book I’m already thinking of as a modern classic.”

Syima Aslam on Luster by Raven Leilani: “Sharp and incisive, Luster speaks a fearless truth that takes no hostages. Leilani is unflinchingly observant about the realities of being a young, black woman in America today and revelatory when it comes to exploring unconventional family life and 21st-century adultery, in this darkly comic and strangely touching debut.”

Stephen Sexton on My Dark Vanessa by Kate Elizabeth Russell: “My Dark Vanessa is an articulate, uncompromising and compelling novel about abuse, its long trail of damage and its devastating iterations. In Vanessa, Russell introduces us to a character of immense complexity, whose rejection of victimhood—in favour of something more like love—is tragic and unforgettable. Timely, harrowing, of supreme emotional intelligence, My Dark Vanessa is the story of one girl; of many girls, and of the darknesses of Western literature.”