Short Classics Week of #NovNov: Who Was Changed and Who Was Dead

Can you believe it’s the last week of Novellas in November?! I’m hosting our final theme, short classics, and my first review is of a strange, mesmerizing 1950s novella.

We hope some of you will join in with our last buddy read, Ethan Frome by Edith Wharton (free to download here from Project Gutenberg if you don’t already have access). I’m looking forward to rereading it – in one sitting, if I can manage it – on Tuesday afternoon or Wednesday morning and will review it on Thursday. This list of 10 favourite classic novellas I put together last year might give you some more ideas of what to read this week.

Who Was Changed and Who Was Dead by Barbara Comyns (1954)

I’d heard about this via its recent Daunt Books reissue and was attracted to the plague theme. The spark for the story was a real-life event in France in 1951, but Comyns takes imaginative liberties. In 1911, a Warwickshire village is overtaken by calamity: first a flood and then a mysterious sickness. The first line – “The ducks swam through the drawing-room window” – sets up a jolly, fable-like atmosphere as the Willoweed family go rowing through their garden. And yet there’s death all over the place. The multitude of drowned animals soon cedes to a roll call of human casualties. Some deaths are self-inflicted and others result from rapid illness, but all are gruesome. The general pattern of the sickness seems to be stomach pains, fits, bleeding and death, all within a few days. At first, we don’t know if what we’re looking at is a medical phenomenon or a case of mass hysteria. Either is rich fodder for fiction.

Ebin Willoweed writes it all up for the newspapers, leaving his motherless daughters to do the hard work of cleaning up from the flood damage and looking after their little brother. Meanwhile, Ebin’s brutal, selfish mother presides over the household like some ogre in a fairy tale. The title (which comes from Longfellow) makes it clear that even those who survive this epidemic will not escape totally unscathed.

Comyns is entirely unsentimental in this, her third novel; those characters who are not horrible are typically passive, and the humour is very black indeed. It’s illuminating to observe how each figure responds to tragedy and what their priorities are. In general, though, it’s not a rosy picture of human nature. While I was initially reminded of H.E. Bates’s The Darling Buds of May and Stella Gibbons’s Cold Comfort Farm, this feels darker. There is some casual racism and the morbidness probably won’t be for everyone, but I remained gripped, wondering how on earth this would conclude. I liked it enough to try more by Comyns – my library has a copy of the brilliantly titled Our Spoons Came from Woolworths, but I’m also open to other suggestions. (Secondhand purchase) 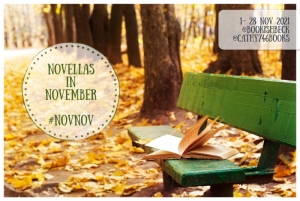 Any short classics on your reading pile?

Song escapes the poverty and natural disasters of his hometown in China by sailing to Guiana. The village medicine man describes Guiana as a kind of paradise, and tells him he can earn free passage if he presents himself to the Englishmen in Guangzhou. What he doesn’t realize is that he will effectively be an indentured servant, working in the sugarcane fields for years just to pay for the voyage. From Singapore to India to Guiana, it’s a long and fraught journey, and though his new home does dazzle with its colors and wildlife, it’s not the idyll he expected. Still, Song is determined to make something of himself. “He would yet live a life that was a story worth telling.”

I have an extract from Chapter 1, about the flooding in China, to whet your appetite:

At first they were glad the rains came early. They had already finished their planting and the seedlings were beginning to push through. The men and women of Lishui straightened their backs, buckled from years of labouring, led the buffalo away and waited for the fields to turn green. With such early rains there might be three rice harvests if the weather continued to be clement. But they quickly lost hope of that. The sun did not emerge to bronze the crop. Instead the clouds hung heavy. More rain beat down upon an already sodden earth and lakes were born where even the old people said they could not remember seeing standing water.

The Li rose higher and higher. Every morning the men of the village walked to the river to watch the water lap at its banks like flames. Sometimes they stood there for hours, their faces as grey as the flat slate light. Still the rain fell, yet no one cared about their clothes becoming wet or the nagging coughs the chill brought on. Occasionally a man lifted his arm to wipe his face. But mostly they stood still like figures in a painting, staring upstream, watching the water barrel down, bulging under its own mass.

Before the end of the week the Li had spilled over its banks. A few days later the water had covered the footpaths and cart tracks, spreading like a tide across the land and sweeping away all the fine shoots of newly planted rice. Further upstream the river broke up carts, bamboo bridges and outbuildings; it knocked over vats of clean water and seeped beneath the doors of homes. Carried on its swirling currents were splintered planks of wood, rotting food, and shreds of sacking and rattan.

Song awoke to feel the straw mat wet beneath him. He reached out his hand. The water was gently rising and ebbing as if it was breathing. His brother Xiao Bo was crying in his sleep. The little boy had rolled off his mat and was lying curled up in the water. He was hugging his knees as if to stop himself from floating away.

Song’s father was not home yet. He and the other men had been working through the night trying to raise walls of mud and rein back the river’s strength. But the earthen barriers washed away even as they built them; they could only watch, hunched over their shovels.

The men did not return that day. As the hours passed the women grew anxious. They stopped by each other’s homes, asking for news, but nobody had anything to say. Song’s mother Zhang Je was short with the children. The little ones whimpered, sensing something was wrong.

Song huddled low with his sisters and brothers around the smoking fire which sizzled and spat but gave off no heat. They had wedged among the firewood an iron bowl but the rice inside was not warming. That was all they had left to eat now. Xiao Wan curled up closer to Song. His little brother followed him everywhere nowadays. His sisters Xiao Mei and San San sat opposite him, adding wet wood to the fire and poking at the ash with a stick. His mother stood in the doorway, the silhouette of Xiao Bo strapped to her back and her large rounded stomach tight with child.

The children dipped their hands into the bowl, squeezing grains of rice together, careful not to take more than their share. Song was trying to feed Xiao Wan but he was too weak even to swallow. The little boy closed his eyes and rested his head in Song’s lap, wheezing with each breath. Their mother continued to look out towards the fields, waiting, with Xiao Bo’s head slumped unnaturally to the side as he slept.

‘I don’t think they’re coming back.’

Song could barely hear what his mother was saying.

‘They’re too late,’ she muttered.

Song wasn’t sure if she was talking to him. ‘Mama?’

Her voice was more brisk. ‘They’re not coming back, I said.’