Classic of the Month: The Moon and Sixpence

This was indeed the perfect follow-up to Fabrizio Dori’s Gauguin, the SelfMadeHero graphic novel I reviewed earlier in the month. W. Somerset Maugham’s short novel functioned like a prequel for me because, whereas Dori focuses on Gauguin’s later life in the South Pacific, Maugham concentrates on his character Charles Strickland’s attempt to make a living as a painter in Paris.

The Moon and Sixpence – the unusual title comes from the TLS reviewer’s description of the protagonist in Of Human Bondage as so absorbed in reaching for the moon that he doesn’t notice the sixpence at his feet – is narrated by an unnamed author drawn into Strickland’s orbit through his wife Amy Strickland’s attendance at London literary soirées. He hasn’t gotten to know the couple very well at all when he hears that Charles, a stockbroker, has abandoned his family and left for Paris to pursue painting – a hobby for which he’s never previously shown any aptitude.

Amy sends the narrator off to Paris to talk sense into her husband, but Charles never shows the least remorse. The narrator marvels at his insouciance and utter conviction that he is meant to be an artist.

He was single-hearted in his aim, and to pursue it he was willing to sacrifice not only himself – many can do that – but others. He had a vision. Strickland was an odious man, but I still think he was a great one.

I noted familiar themes from Of Human Bondage (published in 1915, four years prior to The Moon and Sixpence), especially the artist’s struggle, nomadism and the threat of poverty. Dirk Stroeve, the talentless Dutch painter who becomes friendly with the narrator in Paris and recognizes Strickland’s brilliance even as he lets the man walk all over him, reminded me of the happy-go-lucky Thorpe Athelny in Bondage.

At less than a third of the length of that earlier novel, though, The Moon and Sixpence struck me as a condensed parable about genius and sacrifice.

Beauty is something wonderful and strange that the artist fashions out of the chaos of the world in the torment of his soul. … It was the work of a man who had delved into the hidden depths of nature and had discovered secrets. … There was something primeval there and terrible. It was not human. It brought to … mind vague recollections of black magic. It was beautiful and obscene.

This is a fascinating character study, whether or not you’re aware of Gauguin’s life as the inspiration, and would be a great introduction to Maugham’s work if you’ve not read him before. (Secondhand copy from Bookbarn International.)

Gauguin Gets the Graphic Novel Treatment 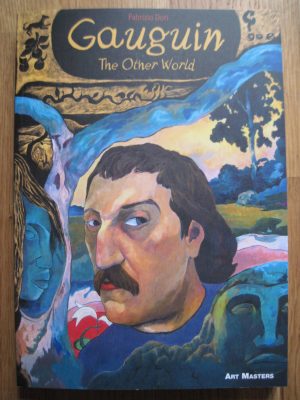 Fabrizio Dori’s Gauguin: The Other World is the third graphic novel I’ve reviewed from SelfMadeHero’s “Art Masters” series, after Munch and Vincent. Like those previous volumes, it delivers salient snippets of biography alongside drawings that cleverly echo the subject’s artistic style. Here the focus is on the last 12 years of Paul Gauguin’s life (1848–1903), which were largely spent in the South Pacific.

The book opens with a macro, cosmic view – the myth of the origin of Tahiti and a prophecy of fully clothed, soulless men arriving in a great canoe – before zeroing in on Gauguin’s arrival in June 1891. Although he returned to Europe in 1893–5, Tahiti and the Marquesas Islands would be his final homes. This is all covered in a whirlwind Chapter 1 that ends by, Christmas Carol-like, introducing a Spirit (as pictured in his 1892 painting Manaó Tupapaù (Spirit of the Dead Watching)) who will lead Gauguin – in a morphine haze on his deathbed in 1903 – and readers on a tour through his past.

Gauguin grew up in Peru and Paris, and at age 17 joined the crew of a merchant marine vessel to South America and the West Indies. Back in Paris, he tried to make a living as a stockbroker and salesman while developing as a self-taught artist. He married Mette, a Danish woman, but left her and their children behind in Copenhagen when he departed for Tahiti. The paintings he sent back were unprofitable, and she soon came to curse his career choice.

The locals called Gauguin “the man who makes men” for his skill in portraiture, but also “the woman man” because he wore his hair long. He moved from Papeete, Tahiti’s European-style colonial town, to a cabin in the woods to become more like a savage, and also explored the ghost-haunted island interior. Teura came to live with him as his muse and his lover.

The book is full of wonderful colors and spooky imagery. The palette shifts to suit the mood: dusky blue and purple for the nighttime visit of the Spirit, contrasting with lush greens, pinks and orange for other island scenes and simple ocher and black for the sequences where Gauguin is justifying his decisions. The black-robed, hollow-faced Spirit reminded me of similar figures imagined by Ingmar Bergman and Hayao Miyazaki – could these film directors have been inspired by Gauguin’s Polynesian emissary of death?

Overall this struck me as a very original and atmospheric way of delivering a life story. Although the font is a little bit difficult to read and I ultimately preferred the art to the narration, they still combine to build a portrait of a brazen genius who shunned conventional duties to pursue his art and cultivate the primitive tradition in new ways. Gauguin ends with a short sequence set in Paris in 1907, as Pablo Picasso, fired up by a Gauguin retrospective show, declares, “We must break with formal beauty. We must be savages.”

I appreciated this brief peek into the future, as well as the five-page appendix of critical and biographical information on Gauguin contributed by art critic Céline Delavaux. What I said about Vincent holds true here too: I’d recommend this to anyone with an interest in the lives of artists, whether you think you’re a fan of graphic novels or not. It will be particularly intriguing to see how Dori’s vision of Gauguin compares to that in W. Somerset Maugham’s The Moon and Sixpence, which I plan to start soon.

With thanks to Paul Smith of SelfMadeHero – celebrating its 10th anniversary this year – for the review copy. Translated from the French by Edward Gauvin.