Frieda by Annabel Abbs: A Sideways Look at D.H. Lawrence

Possibly never before nor since has a great writer been so intensely and so permanently influenced by one woman as Lawrence was by Frieda von Richtofen.

I have a weakness for “famous wives” books, which have become increasingly popular over the past decade. (I have a whole shelf for them on Goodreads.) Frieda particularly appealed to me because of the reading I’ve done around the life of D.H. Lawrence. In my sophomore year of college I took a course on Yeats & Lawrence and found Lawrence fascinating almost in spite of myself. I remember bursting out in one early seminar on Sons and Lovers, “but he sexualizes everything!” The more I read, though, the more I admired his grasping for the fullness of life, which at least starts with the body.

After my study abroad year I did independent travel in Dorset and around Nottingham to explore the sense of place in Thomas Hardy and Lawrence’s works, and when I applied for graduate school scholarships I was undecided whether to focus on the Victorians or Lawrence and the Moderns (I eventually settled on the former). I also adapted a paper I’d written about D.H. Lawrence’s new moral framework for sexuality in Lady Chatterley’s Lover and presented it at the D.H. Lawrence Society of North America’s 2005 conference in Santa Fe, New Mexico. The conference included a wonderful trip out to Lawrence’s ranch at Taos.

All this explains why I was so keen to see how Annabel Abbs would depict Frieda, who came from disgraced German aristocracy and left her first husband, Ernest Weekley, a linguistics professor at Nottingham, and their three children to be with Lawrence. If you rely only on the words of Lawrence himself, you’d think Frieda was lucky to shed her dull family life and embark on an exciting set of bohemian travels with him as he built his name as a writer.

Abbs adds nuance to that picture by revealing just how much Frieda was giving up, and the sorrow she left behind her. Much of the book is in third person limited from Frieda’s point of view, but there are also occasional chapters from the perspectives of Ernest and the children, mostly their son Monty, as they work through their confusion over Frieda’s actions and try to picture the future without her. I loved the way that these chapters employ dramatic irony, especially to create a believable child mindset. “I have realised there is something inside me struggling to come out,” Frieda says to Monty. “I call it the what-I-could-be.” Poor Monty, just seven years old when the book opens in 1907, thinks his mother must be talking literally about a baby on the way. When her inchoate longings finally center on Lawrence, Ernest’s working-class former student, in 1912, Monty describes the young man as a “hungry fox.”

Frieda’s relationship with Lawrence, whom she called “Lorenzo,” lasted nearly two decades but was undeniably volatile. Abbs refuses to romanticize it: the early days of frolicking naked in meadows and weaving flowers through each other’s pubic hair soon cede to incidents of jealousy and disturbing cruelty. Lawrence pressed her into remarrying though she was happier living outside of convention. We can sympathize with the passion and deep communion she found with Lawrence –

“She was conscious, in that moment, that their minds had met and crossed and understood. That this miner’s son – so strange and unknown, so young – was more like her than anyone she’d ever met.”

“She felt as if she had been split open, as if Mr Lawrence had peered deep inside her, seen things she had hidden from the rest of the world. It was a marvellous feeling, she decided, to be explored and understood.”

– but also with the later suspicion that she’s given up so much – social acceptability and years of life with her children – and perhaps in some ways it hasn’t been worth it. “He could be so infuriating! So exhausting! But his vitality, the sharp light in which he saw everything, his wild poetic fury, they made her feel as if she could breathe again.”

Frieda is particularly reminiscent of Loving Frank, Nancy Horan’s novel about Mamah Borthwick Cheney’s affair with architect Frank Lloyd Wright: she left her children in pursuit of love and independence and spent time traveling, including in Germany, where she absorbed notions of free love and women’s rights – just as Frieda did. I was also reminded of Free Woman, Lara Feigel’s book on Doris Lessing, who gave up her children to pursue her writing. In Lessing’s case there was not the same wrenching regret. Still, all three books offer a valuable look at the choices women make when love, duty and vocation don’t align. 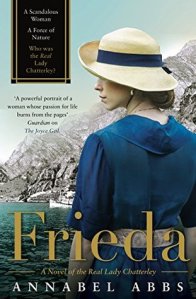 My knowledge of Lawrence’s writings and biography enhanced my enjoyment of this novel. I’ve appreciated for the first time just how much Frieda inspired the female protagonists in Lawrence’s major works. In a comprehensive Historical note and Author’s note, Abbs lists her sources and explains the small tweaks she made to the historical record to fit the story line. However, you don’t need any prior knowledge to fall in love with Frieda’s vivacity. Her determination to live according to her own rules makes her a captivating character.

Frieda was published by Two Roads on November 15th. With thanks to the publisher for the proof copy for review.