Three on a Theme (and #ReadIndies): Nonfiction I Sponsored Last Year

Here in the UK we’re hunkering down against the high winds of Storm Eunice. We’ve already watched two trees come down in a neighbour’s garden (and they’re currently out there trying to shore up the fence!), and had news on the community Facebook page of a huge conifer down by the canal. Very sad. I hope you’re all safe and well and tucked up at home.

Today I’m looking back at several 2021 nonfiction releases I helped come into existence. The first and third I sponsored via Unbound, and the second through Dodo Ink. Supporting small publishers also ties this post into Karen and Lizzy’s February Read Indies initiative. All:

This Party’s Dead: Grief, Joy and Spilled Rum at the World’s Death Festivals by Erica Buist

A death tourism book? I’m there! This is actually the third I’ve read in recent years, after From Here to Eternity by Caitlin Doughty and Near the Exit by Lori Erickson. Buist’s journey was sparked off by the sudden death of her fiancé Dion’s father, Chris – he was dead for a week before his cleaner raised the alarm – and her burden of guilt. It’s an act of atonement for what happened to Chris and the fact that she and Dion, who used to lodge with him, weren’t there when he really needed it. It’s also her way of discovering a sense of the sacred around death, instead of simply fearing and hiding from it.

This takes place in roughly 2018. The author travelled to eight festivals in seven countries, starting with Mexico for the Day of the Dead and later for an exploration of Santa Muerte, a hero of the working class. Other destinations included Nepal, Sicily (“bones of the dead” biscotti), Madagascar (the “turning of the bones” ceremony – a days-long, extravagant party for a whole village), Thailand and Kyoto. The New Orleans chapter was a standout for me. It’s a city where the dead outnumber the living 10 to 1 (and did so even before Katrina), and graveyard and ghost tours are a common tourist activity.

Buist is an entertaining writer, snappy and upbeat without ever seeming flippant as she discusses heavy topics. The mix of experience and research, the everyday and the momentous, is spot on and she recreates dialogue very well. I appreciated the earnest seeking here, and would happily read a book of hers on pretty much any subject. (New purchase from Unbound)

I’ll never learn: I left it nearly 10 months between finishing this and writing it up. And took no notes. So it’s nearly impossible to recreate the reading experience. What I do recall, however, is how wide-ranging and surprising I found this book. At first I had my doubts, thinking it was overkill to describe sad events like a break-up or loss as “traumatic”. But an essay midway through (which intriguingly trades off autobiographical text by Kirsty Logan and Freudian interpretation by Paul McQuade) set me straight: trauma cannot be quantified or compared; it’s all about the “unpreparedness of the subject. A traumatic event overwhelms all the defences laid out in advance against the encroachment of negative experience.” 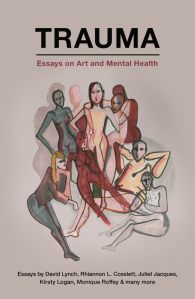 The pieces can be straightforward memoir fragments or playful, experimental narratives more like autofiction. (Alex Pheby’s is in the second person, for instance.) Within those broad branches, though, the topics vary widely. James Miller writes about the collective horror at the Trump presidency. Emma Jane Unsworth recounts a traumatic delivery – I loved getting this taste of her autobiographical writing but, unfortunately, it outshone her full-length memoir, After the Storm, which I read later in the year. Susanna Crossman tells of dressing up as a clown for her clinical therapy work. Naomi Frisby (the much-admired blogger behind The Writes of Womxn) uses food metaphors to describe how she coped with the end of a bad relationship with a narcissist.

As is inevitable with a collection this long, there are some essays that quickly fade in the memory and could have been omitted without weakening the book as a whole. But it’s not gracious to name names, and, anyway, it’s likely that different pieces will stand out for other readers based on their own experiences. (New purchase from Dodo Ink)

It was over three years between when I pledged support and held the finished book in my hands; I can only imagine what a mammoth job compiling it was for Katharine Norbury (author of The Fish Ladder). The subtitle on the title page explains the limits she set: “An anthology of women’s writing about the natural world in the east Atlantic archipelago.” So, broadly, British and Irish writers, but within that there’s a lot of scope for variety: fragments of fiction (e.g., a passage from Jane Eyre), plenty of poetry, but mostly nonfiction narratives – some work in autobiographical reflection; others are straightforward nature or travel writing. Excerpts from previously published works trade off with essays produced specifically for this volume. So I encountered snippets of works I’d read by the likes of Miriam Darlington, Melissa Harrison, Sara Maitland, Polly Samson and Nan Shepherd. The timeline stretches from medieval mystics to today’s Guardian Country Diarists and BIPOC nature writers.

For most of the last seven months of 2021, I kept this as a bedside book, reading one or two pieces on most nights. It wasn’t until early this year that I brought it downstairs and started working it into my regular daily stacks so that I would see more progress. At first I quibbled (internally) with the decision to structure the book alphabetically by author. I wondered if more might have been done to group the pieces by region or theme. But besides being an unwieldy task, that might have made the contents seem overly determined. Instead, you get the serendipity of different works conversing with each other. So, for example, Katrina Porteous’s dialect poem about a Northumberland fisherman is followed immediately by Jini Reddy’s account of a trip to Lindisfarne; Margaret Cavendish’s 1653 dialogue in verse between an oak tree and the man cutting him down leads perfectly into an excerpt from Nicola Chester’s On Gallows Down describing a confrontation with tree fellers.

I’d highly recommend this for those who are fairly new to the UK nature writing scene and/or would like to read more by women. Keep it as a coffee table book or a bedside read and pick it up between other things. You’ll soon find your own favourites. (New purchase from Unbound)

“It occurred to me that trees were part of the grammar of one’s life, as much as any spoken language. … To see trees every day and to be seen by them is a privilege.”

Sponsored any books, or read any from indie publishers, recently?

I call it Book Serendipity when two or more books that I read at the same time or in quick succession have something pretty bizarre in common. Because I have so many books on the go at once (usually 20–30), I suppose I’m more prone to such incidents. I’ve realized that, of course, synchronicity is really the more apt word, but this branding has stuck. This used to be a quarterly feature, but to keep the lists from getting too unwieldy I’ve shifted to bimonthly.

Book Serendipity, Mid-March to Early May 2021

In early April, the publisher Canongate ran a newsletter competition for one reader to win a stack of their recent releases. All you had to do was reply with your favourite word. On Twitter they gave a rundown of the most popular responses. Turning up several times each were petrichor, mellifluous, and oleaginous. Most frequent of all was serendipity: I was one of 15 to submit it! And one of those entries, but not mine, won. Anyway, fun little story there.

I call it Book Serendipity when two or more books that I read at the same time or in quick succession have something pretty bizarre in common. Because I have so many books on the go at once (usually 20‒30), I suppose I’m more prone to such incidents. I’ve realized that, of course, synchronicity is really the more apt word, but this branding has stuck.

I call it Book Serendipity when two or more books that I read at the same time or in quick succession have something pretty bizarre in common. Because I have so many books on the go at once (usually 20‒30), I suppose I’m more prone to such incidents.

Josh Cohen’s How to Live. What to Do, a therapist’s guide to literature, explains why this might happen:

More than one writer – the French poet Stéphane Mallarmé, the Argentinian writer Jorge Luis Borges – has advanced the exhilarating idea that each book is an infinitesimally small piece of one single, endless Book. I’ve always felt that this idea, unlikely as it might sound, makes perfect sense if you read enough novels [also nonfiction, for me]. The incidents, descriptions, phrases and images in the book you’re reading will always recall the incidents in another, and those in turn will call up the incidents in another, so that even as you’re reading one book, you’re reading countless others.