I call it Book Serendipity when two or more books that I read at the same time or in quick succession have something pretty bizarre in common. Because I have so many books on the go at once (usually around 20), I suppose I’m more prone to such incidents than some. I also list these occasional reading coincidences on a Twitter thread.

The following are in chronological order. (January to March’s incidents appeared in this post, and April to July’s here.)

Almost there! Today I have a family memoir about the repercussions of cancer and a novel about an Indian chef who becomes a guardian of traditional French cuisine.

(20 Books of Summer, #17) I put this on the pile for my foodie-themed summer reading challenge because a marrow is an overgrown courgette (zucchini), but of course bone marrow is also eaten and is what is being referred to here. When they were in middle age and Lesser’s younger sister Maggie had a recurrence of her lymphoma, the author was identified as a perfect match to donate bone marrow. She charts the ups and downs of Maggie’s treatment but also goes deep into their family history: parents who rejected the supernatural in reaction to her mother’s Christian Science upbringing; a quartet of sisters who competed for love and attention; and different approaches to life – Maggie was a back-to-the-land Vermont farmer, nurse and botanical artist, while Elizabeth had bucked the trend by moving to New York City and exploring spirituality (she co-founded the Omega Institute, a holistic retreat center).

By including unedited “field notes” Maggie wrote periodically, Lesser recreates the drama and heartache of the cancer journey. She also muses a lot about attempts to repair family relationships through honest conversations and therapy. “Marrow” is not just a literal substance but also a metaphor for getting to the heart of what matters in life. I expect this memoir will be too New Age-y for many readers, but I appreciated its insights and the close sister bonds. I also loved the deckle edge and Maggie’s botanical prints on the endpapers. Recommended to fans of Elizabeth Gilbert and Anne Lamott.

Source: A clearance book from Blackwell’s in Oxford (bought on a trip with Annabel last summer) 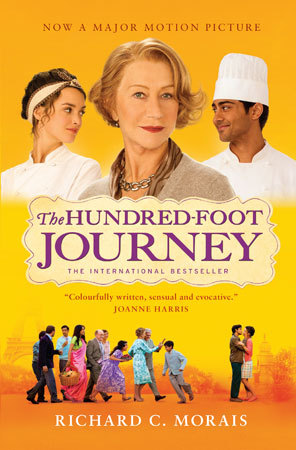 (20 Books of Summer, #18) From the acknowledgments I learned that this was written specifically to be filmed by the author’s friend Ismail Merchant; though Merchant died in 2005, it’s no surprise that it went on to become a well-received 2014 movie. I think the story probably worked better on the big screen, what with the Indian and French settings, the swirls of color and the bustle of restaurant kitchens. Still, I’d forgotten enough about the story line to enjoy the book, too.

Hassan Haji, the narrator, is born in Mumbai, one of six children of a restaurateur, and has his interest in other food cultures awakened early by a memorable French meal (a common experience in several other books I’ve reviewed this summer: Kitchen Confidential, How to Love Wine and Tender at the Bone). After his mother’s death, the extended family relocates to London and then to provincial France. Stranded in Lumière by a car breakdown, the family decides to stay, opening a curry house across from a fine dining establishment run by Gertrude Mallory. Madame Mallory engages in a battle of wills with the uncouth new arrivals. It nearly takes a tragedy for her to get over her snobbishness and xenophobia and realize Hassan has a perfect palate. She takes him on as an apprentice and he makes the title’s 100-foot journey across the street to join her staff.

The film was undoubtedly a Helen Mirren vehicle, and the Lumière material from the middle of the book holds the most interest. The remainder goes more melancholy as Hassan loses many family members and colleagues and deplores the rise of French bureaucracy and fads like molecular gastronomy. Although he eventually earns a third Michelin star for his Paris restaurant, the 40-year time span means that the warm ending somewhat loses its luster. (I can’t remember if the film went so far into the future.) A pleasant summer read nonetheless.

Source: Free from a neighbor