How to Be Human and Strange Heart Beating

I’m mostly grouping these two debut novels by women authors together for my scheduling convenience, but they do have things in common. For starters, both center on an encounter with another species that determines much of what follows. For another thing, they pivot on the end of one relationship and the potential beginning of another. And in the end they’re about how we retain our humanity in the face of loss – despite the strong temptation to give into madness. Although they are both notable and surprising books, I felt that one was significantly more successful than the other; read on to discover which I favor.

How to Be Human by Paula Cocozza

Thirty-four-year-old Mary Green is adrift after her long-term fiancé, Mark, moves out of their East London home. She works in university HR but hates her job and can never manage to show up to it on time. Though she and Mark broke up in part because she didn’t feel ready to commit to having children, she’s inordinately fond of the next-door neighbors’ baby, Flora. Most of all, she’s trying to reorient herself to the presence of a fox who slips in from the surrounding edgeland to visit her back garden each evening. He leaves presents: boxers, a glove, an egg, and – one disorienting evening – Flora herself, a live bundle on the back steps. 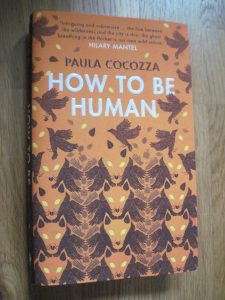 Whereas the neighbors are horrified at the thought of a fox infestation and ready to go on the attack if necessary, Mary is enraptured by this taste of wildness. Before long the novel is using almost erotic vocabulary to describe her encounters with ‘her’ fox; Mary even allows the neighbors and her ex to get the idea that she’s ‘seeing someone’ new. Yet even as Mary’s grasp on reality grows feebler, it’s easy to empathize with her delight at the unexpectedness of interspecies connection: “At the end of her garden she had found a friend. … His wildness was a gift. … He was an escape artist, she thought admiringly. Maybe he could free her too.”

I love this novel for what it has to say about trespass, ownership and belonging. Whose space is this, really, and where do our loyalties lie? Cocozza sets up such intriguing contradictions between the domestic and the savage, the humdrum and the unpredictable. The encounter with the Other is clarifying, even salvific, and allows Mary to finally make her way back to herself. There’s something gently magical about the way the perspective occasionally shifts to give the fox’s backstory and impressions as a neologism-rich stream (“Come fresh to stalk around the human Female with sly feet and rippety eyes. Spruckling toadsome”). Memorable lines abound, and a chapter set at the neighbors’ barbecue is brilliant, as are the final three chapters, in which Mary – like James Darke – holes up in her house in anticipation of a siege. 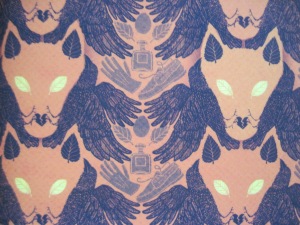 Detail from the cover.

As much as this is about a summer of enchantment and literal brushes with urban wildlife, it’s also about women’s lives: loneliness, choices we make and patterns we get stuck in, and those unlooked-for experiences that might just liberate us. The character Mary is my near contemporary, so I could relate to her sense of being stuck personally and professionally, and also of feeling damned if you do, damned if you don’t regarding having children. “Some part of her was made for a bigger, wilder, freer life.” One of my favorite books of 2017 so far.

Paula Cocozza is a feature writer for the Guardian. How to Be Human was published in the UK by Hutchinson on April 6th. My thanks to the publisher for the free copy for review.

If you’re in the London area, you may be interested in this animal-themed Faber Social event, also featuring Lucy Jones, author of Foxes Unearthed. I’ll be in America at the time or else I surely would have gone!

I also enjoyed these two articles by Paula Cocozza: one on the depiction of foxes in popular culture, and the other about a life-changing encounter she had with a wild fox. 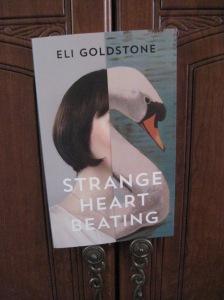 No doubt about it: the cover and title – from W. B. Yeats’s “Leda and the Swan” – can’t be beat. One day in late March this book showed up on my Twitter, Goodreads and Instagram feeds, and the cover lured me into requesting a copy right away. The elevator pitch is a winner, too: Seb’s artist wife, Leda, was killed by a swan. To be precise, she was boating in a London park and got too close to some cygnets; the parent bird upturned the boat and Leda drowned. The novel is narrated by Seb, an art history professor realizing just how little he knew about the woman he loved. When he takes a break from work to travel to Leda’s native Latvia in search of answers, he even learns that she was known by another name, Leila.

It’s as if Seb is running both towards and away from his sorrow:

What can I do to find some way back to Leda? I seek for meaning in every miserable glint and shadow … I felt I was starting to lose myself as well. Grief is the aggressive displacement of the self from a known universe to another … I want to bury myself neck-deep in the quicksand of grief.

When he gets to Latvia he stays at a guesthouse and communicates with the landlady in Russian. For a week running he meets Leda’s cousin Olaf at his clubhouse each night to drink and play cards, and later bags a boar with Olaf and his hunting buddies. While viewing a fresco in a picturesque church he meets Ursula, who is looking to build an eco-friendly resort to boost the country’s tourism industry. She soon emerges as a potential love interest for Seb.

As best I could make out, this is set roughly a decade ago. Interspersed between Seb’s rather aimless travels are passages from Leda’s diary between 1988 and 2005. These reveal her to have been a lonely, bullied youth who took refuge in art and music. If you’re familiar with the myth of Leda and the Swan, you’ll be expecting the trauma in her past. It’s a shame this has to be spelt out in Leda’s final diary entry; it was sufficiently foreshadowed, I think.

Ultimately I felt this book had a promising setup but didn’t particularly go anywhere. It struck me as an excellent short story idea that got expanded and lost a good bit of its power along the way. This is a shame, as I was initially reminded of several excellent debut novels with Eastern European elements, especially in the excellent opening sequence about how Leda’s various female ancestors perished (Jonathan Safran Foer’s Everything Is Illuminated, Rebecca Dinerstein’s The Sunlit Night, and Jaroslav Kalfař’s Spaceman of Bohemia). There could have been a quirky family saga in there had Goldstone chosen to go in that direction.

By the end we’ve learned next to nothing about Seb despite his first-person narration, and little of interest about Leda either. I can see how this is meant to reinforce a central message about the unknowability of other people, even those we think we know best, but it creates distance between reader and narrator. You could easily read this 194-page paperback in an afternoon. If you do and find yourself, like me, a mite dissatisfied, never fear – Goldstone is so young and writes so well; I’m confident she will only improve in the years to come.

Eli Goldstone has a City University Creative Writing MA. Strange Heart Beating is published in the UK by Granta today, May 4th. My thanks to the publisher for the free copy for review.

February releases reviewed on my blog today. Nonfiction about doctors’ memorable patients and a life of chronic pain and disability; novels set in 1970s Canada and contemporary (but magically outside-of-time) Paris. https://bookishbeck.wordpress.com/2021/02/26/february-releases-by-de-visser-george-lawson-and-smiley/ #books #instabook #bookstagram #bookblogger #bookreviewer #bookreviews #ellendevisser #thatonepatient #josiegeorge #marylawson #atowncalledsolace #janesmiley #thestraysofparis
Women’s Prize 2021 Predictions. Based on the books by women that I admired, loved, or found most relevant in 2020‒21, here are my predictions for the Women's Prize longlist (to be revealed on 10th March). I aimed for a balance of new and established voices, and a mix of genres. More here: https://bookishbeck.wordpress.com/2021/02/24/womens-prize-2021-predictions-eligible-titles/ #books #instabook #bookstagram #bookblogger #bookaddict #bookreviewer #bibliophile #booksbywomen #womensprize #womensprizeforfiction #womensprizelonglist #womensprizelonglist2021 #prettycovers #britbennett #susannaclarke #naoisedolan #avnidoshi #salenagodden #yaagyasi #daisyjohnson #catherinelacey #patricialockwood #meghamajumdar #emilystjohnmandel #fionamozley #annanorth #ingridpersaud #moniqueroffey #eleywilliams
How to Live. What to Do. by Josh Cohen (out now) is about finding our way via literary characters. A great addition to my books about books shelf! It just arrived today. I'm looking forward to reading and reviewing it soon. #bibliotherapy #books #booksaboutbooks #bookpost #instabook #bookstagram #shelfie #bookblogger #bookaddict #bibliophile #bookreviewer #joshcohen #ebury
#books #instabook #bookstagram #prettycovers #essays #booksaboutbooks #bibliophile #bookaddict #essaysaboutbooks #annefadiman #michikokakutani #booksforbooklovers #booksforbibliophiles #exlibris #bookplates #bookblogger #bookreviews #bookreviewer
I’m a dedicated bookmark user and probably have at least 120–150 that I rotate through, matching marker to book subject matter or reading location whenever possible. A sorry subset of my collection commemorates bookshops (secondhand and/or new stock) that no longer exist. I was a customer at a couple of these, but only know of the others through bookmarks that I found at random, e.g. in secondhand purchases from other stores. Through Google Earth, I tracked down what you’ll find where these shops used to be. The full story is on my blog today: https://bookishbeck.wordpress.com/2021/02/16/sad-souvenirs-defunct-bookshops-bookmarks/ #books #bookmarks #instabook #bookstagram #bookshops #closedbookstores #closedbookshops #defunctbookshops #defunctbookstores #bowiemaryland #bookblogger #bookaddict #bibliophile #bookmarkcollection
From a vibrant novel about trauma and second chances to a cultural history of our knowledge of the organ and its symbols, via a true story of the effects of being struck by lightning, what might these three disparate books have to tell us about the human heart on Valentine’s Day? Reviewed on my blog today: https://bookishbeck.wordpress.com/2021/02/14/three-on-a-theme-heart/ #books #instabook #bookstagram #heartbooks #bookswithheart #valentines #valentinesday #valentinesreading #valentinesbooks #elainecastillo #gretelehrlich #gailgodwin #threeonatheme #prettycovers
Loading Comments...
Comment
×