Three on a Theme for Father’s Day: Auster, Knausgaard, Lewis

In advance of Father’s Day, I picked out a few short memoirs from my shelves that explore the bonds between fathers and their children.

The Invention of Solitude by Paul Auster (1982) 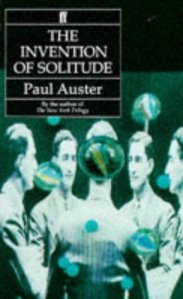 This was the nonfiction work of Auster’s I was most keen to read, and I thoroughly enjoyed its first part, “Portrait of an Invisible Man,” which includes a depiction of his late father, a discussion of his relationship with his son, and a brief investigation into his grandmother’s murder of his grandfather, which I’d first learned about from Winter Journal. Auster finds himself unable to cry and has to deal with all his father’s possessions. “There is nothing more terrible, I learned, than having to face the objects of a dead man … everything from a set of barbels to a broken toaster.” A personalized family photo album he finds is blank inside. That and the cover image, a trick photograph taken of his father at Atlantic City in the 1940s, feel like perfect symbols of an elusive heritage. I didn’t connect with the second, slightly longer half, though: “The Book of Memory” is more like Auster’s novels, describing the exploits of a lightly fictionalized character named “A.” and full of copious allusions to the likes of Flaubert, Freud and Tolstoy.

[Translated from the Norwegian by Don Bartlett]

I assumed this was a stand-alone from Knausgaard; when it popped up during an author search on Awesomebooks.com and I saw how short it was, I thought why not? As it happens, this Vintage Minis paperback is actually a set of excerpts from A Man in Love, the second volume of his huge autofiction project, My Struggle (I’ve only read the first book, A Death in the Family). Knausgaard takes readers along on a few kiddie-oriented outings: a dinky circus, a children’s party, and baby rhyme time at the public library. His trademark granular detail gives a clear sense of all the characters involved. With him are his wife Linda and the three children they had by then, Vanja, Heidi and John; his friend Geir is his chief confidant.

It’s evident that he loves his children and delights in their individual personalities, but at the same time he feels his intellect assailed by the tedium of the repetitive tasks involved in parenting. He demands an hour to himself each afternoon to read and smoke in a café – even though he knows his wife doesn’t get such an allowance. Specifically, he writes that he feels feminized by carrying a baby or pushing a buggy. Recounting the children’s party, he recalls an earlier party when a heavily pregnant Linda got locked in a bathroom and not even a locksmith could get her out. He felt unmanned when a fellow guest (who happened to be a boxer) had to break down the door to free her. I didn’t know quite what to make of the fragile masculinity on display here, but was grateful to get some highlights from the second book.

Home Game: An Accidental Guide to Fatherhood by Michael Lewis (2009) 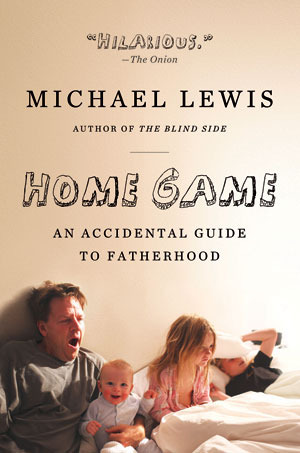 This was expanded from an occasional series of essays Lewis published in Slate in the 2000s, responding to the births of his three children, Quinn, Dixie and Walker, and exploring the modern father’s role, especially “the persistent and disturbing gap between what I was meant to feel and what I actually felt.” It took time for him to feel more than simply mild affection for each child; often the attachment didn’t arrive until after a period of intense care (as when his son Walker was hospitalized with RSV and he stayed with him around the clock). I can’t seem to find the exact line now, but Jennifer Senior (author of All Joy and No Fun) has said something to the effect of: you don’t take care of your children because you love them; you love them because you take care of them. And that indeed seems to encapsulate Lewis’s experience.

The family lived in Paris when Quinn was tiny, and the pieces on adjusting to the French parenting style reminded me of Pamela Druckerman’s French Children Don’t Throw Food / Bringing Up Bébé. His parenting adventures take him everywhere from the delivery room to a New Orleans racetrack at Mardi Gras to a Disneyland campground. He also, intriguingly, writes about a visit paid to Roald Dahl in the writer’s later years. Even when he’s exasperated, his writing is warm and funny. I especially laughed at the account of his post-Walker vasectomy. This maybe doesn’t break any new ground in terms of gender roles and equal responsibility for children’s needs, but I expect it’s still true to the experience of a lot of hapless males, and it was an entirely entertaining read.

[Postscript: My timing on this one was pretty ironic: I read it on the plane to the USA to visit my family and then handed it off to my brother-in-law as I think he’ll enjoy it too. My sister looked at the cover and said, “wait, didn’t his daughter just die in a car crash?!” She’d seen it on her phone’s news feed just hours earlier. I couldn’t believe that the sweet little girl with the squinchy face on the middle of the cover was gone! (Dixie, aged 19.)]

If you read just one … Make it Home Game.

Fathers seem to be a big theme in my recent and upcoming reading. There was Featherhood by Charlie Gilmour, a rare 5-star read for me, last month, and I have review copies of the thematically similar Will This House Last Forever? by Xanthi Barker as well as the essay collection DAD. I even pulled out another trio of father-themed memoirs from my shelves, but ended up running out of time to do a second set of three. There’s always next year!