This year I correctly predicted Shuggie Bain by Douglas Stuart and Surge by Jay Bernard as the winners of the Booker Prize and the Sunday Times Young Writer of the Year Award, respectively. Patting myself on the back! 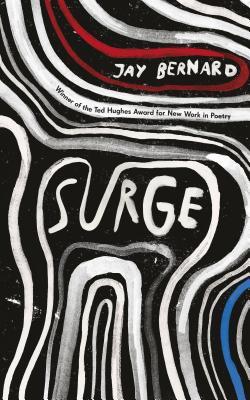 (Earlier in the year, I had a feeling Maggie O’Farrell would win the Women’s Prize, but wasn’t confident enough to single her out; and I got the Wainwright Prizes all wrong.)

I watched both the Booker Prize (live) and Young Writer of the Year Award (pre-recorded) ceremonies online; not having to secure an invitation or pay £30 for the train into London has been an ongoing bonus of pandemic arrangements.

The Booker ceremony was nicely tailored to viewers at home, incorporating brief, informal pre-recorded interviews with each nominated author and a video chat between last year’s winners, Margaret Atwood and Bernardine Evaristo. When Evaristo asked Atwood about the difference between winning the Booker in 2019 versus in 2000, she replied, deadpan, “I was older.” I especially liked the short monologues that well-known UK actors performed from each shortlisted book. Only a few people – the presenter, Evaristo, chair of judges and publisher Margaret Busby, and a string quartet – appeared in the studio, while all the other participants beamed in from other times and places. Stuart is only the second Scottish winner of the Booker, and seemed genuinely touched for this recognition of his tribute to his mother.

I’ve attended the Young Writer ceremony at the London Library twice: in 2017, when I was on the shadow panel, and again last year. It was a shame not to be able to meet up with fellow bloggers and the shortlisted authors, but I appreciated hearing the judges’ thoughts on each nominee. Tessa Hadley said the whole shortlist was “so full of young energy.” Kit de Waal called Catherine Cho’s Inferno “an absolute page-turner.” All the judges remarked at how funny, cutting and original Naoise Dolan’s Exciting Times is. Critic Houman Barekat referred to Seán Hewitt’s Tongues of Fire as “unabashedly earnest.” Hadley said Marina Kemp’s Nightingale is just the kind of novel she loves, a “delicate, full notation,” and Barekat observed that it is a timely reminder of the value of care work. 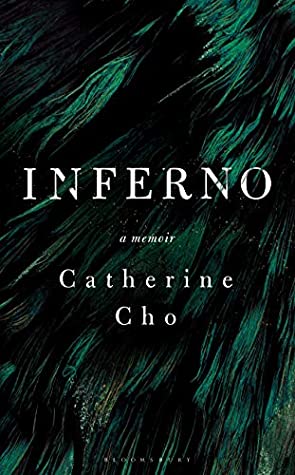 It was clear that, for the judges, all five books were terrifically accomplished and would be worthy winners. Still, the unanimous decision was in favor of Surge, which Sunday Times literary editor Andrew Holgate said is “remarkable for its passionate engagement and diversity of voices.” Bernard read “Hiss” (also up on the Granta website) and said that “poems can take on another life” through performance and short films, so the poet can’t predict whether they will stay in poetry or branch out into other genres.

Back on 18 November, I attended another online event to which I’d gotten a last-minute invitation: a “book club” featuring Tracy Chevalier in conversation with her literary agent, Jonny Geller, on Girl with a Pearl Earring at 20 and her new novel, A Single Thread. In 1996 she sent Geller a letter asking if he’d read Virgin Blue, which she’d written for the MA at the University of East Anglia – the only UK Creative Writing course out there at the time. After VB, she started a contemporary novel set at Highgate Cemetery, where she was a tour guide. It was to be called Live a Little (since a Howard Jacobson title). But shortly thereafter, she was lying in bed one day, looking at a Vermeer print on the wall, and asked herself what the look on the girl’s face meant and who she was. She sent Geller one page of thoughts and he immediately told her to stick Live a Little in a drawer and focus on the Vermeer idea.

Intriguingly, Chevalier stated that the deadline of her pregnancy determined the form of Girl with a Pearl Earring: she knew she had to keep things simple, with a linear narrative, one point of view, and spare prose. While the novel had a quiet publication in August 1999, a good review from Deborah Moggach helped, and it became a “word of mouth success,” never hitting #1 but selling continuously. Chevalier believes this was due to a rare coming together of story and writing; sometimes good stories are hampered by mediocre writing, or vice versa. She and Geller discussed the strange coincidence of two other Vermeer novels coming out at the same time (e.g. Girl in Hyacinth Blue by Susan Vreeland); she had the good luck of being the victor. The film version is “lovely,” she said. Geller has never forgotten Scarlett Johansson, who turned 18 on set, leaving her gum in during a cast supper of spaghetti. 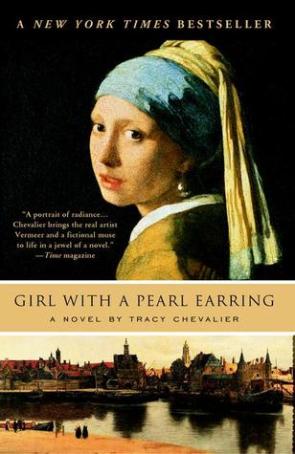 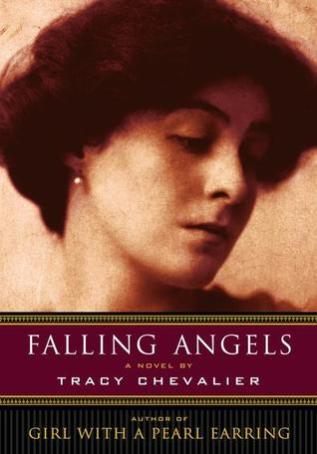 Chevalier’s actual Highgate novel, Falling Angels, didn’t borrow at all from her contemporary-set draft as it was set in 1900. Incorporating suffragette history, it felt like an untold story ripe for the plucking. Falling Angels has long been the one I consider my favorite Chevalier – as of last month, when we did The Last Runaway in book club, I’ve read all her work – but after this event I’m eager to reread it and GwaPE to see what I think.

Lastly, Chevalier and Geller talked about her new novel, A Single Thread, which was conceived before Trump and Brexit but had its central themes reinforced by the constant references back to 1930s fascism during the Trump presidency. She showed off the needlepoint spectacles case she’d embroidered for the novel. This wasn’t the first time she’d taken up a craft featured in her fiction: for The Last Runaway she learned to quilt, and indeed still quilts today. Geller likened her to a “method actor,” and jokingly fretted that they’ll lose her to one of these hobbies one day. Chevalier’s work in progress features Venetian glass. I’m already looking forward to it.

Like me, she moved to England from the Washington, D.C. area and has never lost the ‘accent’, so I feel like she’s a kindred spirit.

Have you taken advantage of any online literary events recently?

I’ve mostly been reading review copies, books from my own shelves, and Kindle books this month, though I did manage one library read during our trip to Amsterdam. While I was at the public library on Thursday, however, I was tempted by several titles from the bestsellers display – these are two-week loans with no renewals, so I have to devote some serious time to them this week and into early October. I’ve read and enjoyed one previous book each by Binet, Knausgaard and Higashida (I just realized those are all translated – how about that? Usually I have to urge myself to remember to read literature in translation!), so will be interested to see how their most recent work stacks up.

(Hosted by Charleen of It’s a Portable Magic.)

Have you been taking advantage of your local libraries? What appeals from my list?

Ghent and Amsterdam, and What I Read

We got back on Monday from a packed week in Ghent and Amsterdam. Despite the chilly, showery weather and a slightly disappointing Airbnb experience in Ghent, it was a great trip overall. Our charming little B&B apartment in Broek in Waterland, a 20-minute bus ride from Amsterdam, more than made up for the somewhat lackluster accommodation in Belgium and was a perfect base for exploring the area. With our three-day, all-inclusive regional travel passes we were free to hop on as many trams and buses as we wanted.

On Saturday we crammed in lots of Amsterdam’s main attractions: the Rijksmuseum, the Begijnhof cloisters, the Botanical Gardens and the Anne Frank House, interspersed with window shopping, a rainy picnic lunch and an Indonesian takeaway dinner eaten by a canal. I also got to visit a more off-the-beaten-track attraction I’d spotted in our guide book: De Poezenboot or “The Cat Boat,” a home for strays moored on the Singel canal. Alas, the resident kitties were not as friendly as many we met on the rest of the trip, but it was still fun. 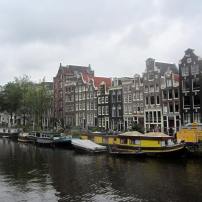 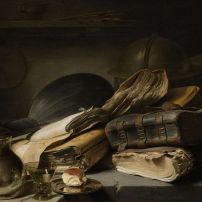 The Begijnhof. Photo by Chris Foster

Cat Boat: King of the castle. 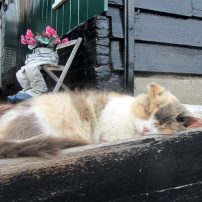 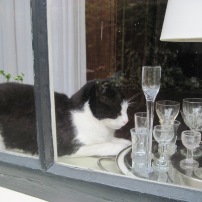 Earless kitty in Broek in Waterland

The highlight of our Amsterdam stay was the Van Gogh Museum on Sunday morning. It was crowded – everything was; though Ghent was very quiet, Amsterdam doesn’t seem to be into its off season yet, if it even has one – but we took our time and saw every single painting, many of which I’d never come across in reproductions. The galleries are organized in chronological order, so you get to trace Van Gogh’s style and state of mind over the years. Superb.

At this point we were just about overwhelmed by the big city atmosphere, so we spent much of the next day and a half in the outlying Dutch towns of Marken and Edam. Flat fields and dykes, cows, cobbled streets and bicycles everywhere – it’s what you’d expect of Holland’s countryside, apart from a surprising dearth of windmills. 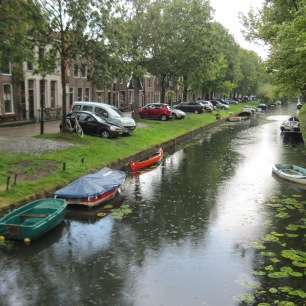 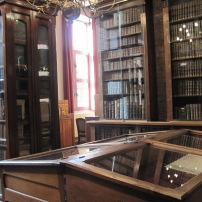 Plus other books I had on the go (lots of short works and literature in translation):

Extremely cheap souvenirs of Amsterdam to add to my collections: a badge, a pressed coin, and a Van Gogh bookmark.

What have you been reading recently?

Do you find that books read ‘on location’ never quite live up to your expectations?

Off to Europe Again, and What Books I’m Packing

We’re off to continental Europe again on Monday. This isn’t a major trip like last summer’s; it’s just a one-week break to take advantage of my husband presenting a paper at a landscape ecology conference in Ghent, Belgium. Though we’ve been to Ghent before, it’s a lovely town, so in between keeping up with a normal editing workload I’ll enjoy being a flâneuse on the streets and seeing the few sights we missed last time. Afterwards we head to Amsterdam for several days; it’ll be my first time there and I’m excited to take it all in.

Coincidentally, I recently read Bernard MacLaverty’s Midwinter Break for a BookBrowse review. It’s about a retired couple, Stella and Gerry, facing up to past trauma and present incompatibility during a short vacation in Amsterdam. They visit a number of the city’s most famous tourist destinations: from the art treasures of the Rijksmuseum to a drink taken in the dubious red light district. It was fun to take a virtual tour with them. We’ll see how much of our itinerary overlaps with theirs – the Anne Frank House, certainly; maybe I should also stop by the Begijnhof since it means so much to Stella.

When possible I like to do some geographically appropriate reading, so I’ve saved up a couple of Dutch-themed novels to take along on the trip: 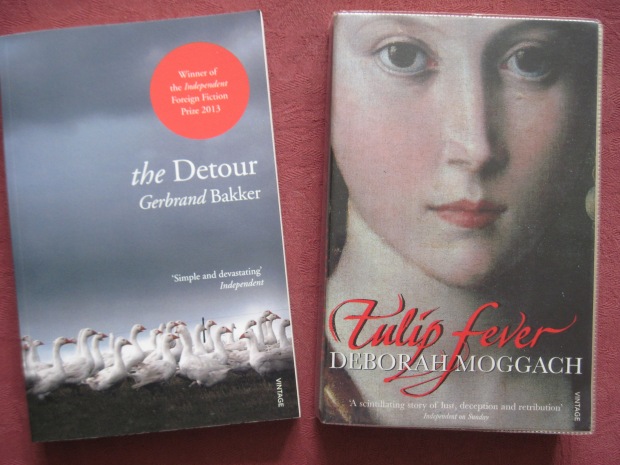 I’m mostly focusing on short fiction in September – short stories, novellas, and novels that are perhaps too long to technically be called novellas but still significantly under 200 pages – so may also pack the following:

I also have to decide whether to take any of the books I currently have on the go, including my Classic (Madame Bovary) and Doorstopper (The Nix) for the month. Luckily we’re going by train, so space and weight limitations aren’t really an issue, though it would probably be prudent not to pack too many print books. I’ll probably at least take the Etgar Keret short stories: they’re flash fictions perfect for reading two or three at a time in a short sitting.

At any rate, I’ll be continuing my two e-books in progress: Cork Dork by Bianca Bosker, about the crazy world of wine obsessives and would-be top sommeliers; and Honeydew, short stories by Edith Pearlman. If I get bored, my Kindle has another 330 titles to choose from. (Isn’t it amazing? – a nearly weightless library!)

We’re back late on the 18th; I’ll be scheduling a couple of posts for while we’re away.