For nonfiction week of Novellas in November, our buddy read is The Story of My Life by Helen Keller (1903). You can download the book for free from Project Gutenberg here if you’d still like to join in.

Keller’s story is culturally familiar to us, perhaps from the William Gibson play The Miracle Worker, but I’d never read her own words. She was born in Alabama in 1880; her father had been a captain in the Confederate Army. An illness (presumed to be scarlet fever) left her blind and deaf at the age of 19 months, and she describes herself in those early years as mischievous and hot-tempered, always frustrated at her inability to express herself. The arrival of her teacher, Anne Sullivan, when Helen was six years old transformed her “silent, aimless, dayless life.”

I was fascinated by the glimpses into child development and education. Especially after she learned Braille, Keller loved books, but she believed she learned just as much from nature: “everything that could hum or buzz, or sing, or bloom, had a part in my education.” She loved to sit in the family orchard and would hold insects or fossils and track plant and tadpole growth. Her first trip to the ocean (Chapter 10) was a revelation, and rowing and sailing became two of her chief hobbies, along with cycling and going to the theatre and museums. 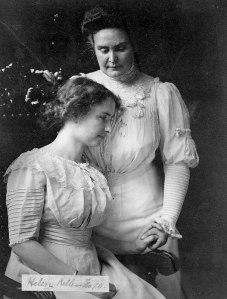 At age 10 Keller relearned to speak – a more efficient way to communicate than her usual finger-spelling. She spent winters in Boston and eventually attended the Cambridge School for Young Ladies in preparation for starting college at Radcliffe. Her achievements are all the more remarkable when you consider that smell and touch – senses we tend to overlook – were her primary ones. While she used a typewriter to produce schoolwork, a teacher spelling into her hand was still her main way to intake knowledge. Specialist textbooks for mathematics and multiple languages were generally not available in Braille. Digesting a lesson and completing homework thus took her much longer than it did her classmates, but still she felt “impelled … to try my strength by the standards of those who see and hear.”

It was surprising to find, at the center of the book, a detailed account of a case of unwitting plagiarism (Chapter 14). Eleven-year-old Keller wrote a story called “The Frost King” for a beloved teacher at the Perkins Institution for the Blind. He was so pleased that he printed it in one of their publications, but it soon came to his attention that the plot was very similar to “The Frost Fairies” in Birdie and His Friends by Margaret T. Canby. The tale must have been read to Keller long ago but become so deeply buried in the compost of a mind’s memories that she couldn’t recall its source. Some accused Keller and Sullivan of conspiring, and this mistrust more than the incident itself cast a shadow over her life for years to come. I was impressed by Keller discussing in depth something that it would surely have been more comfortable to bury. (I’ve sometimes had the passing thought that if I wrote a memoir I would structure it around my regrets or most embarrassing moments. Would that be penance or masochism?)

This short memoir was first serialized in the Ladies’ Home Journal. Keller was only 23 and partway through her college degree at the time of publication. An initial chronological structure later turns more thematic and the topics are perhaps a little scattershot. I would attribute this, at least in part, to the method of composition: it would be difficult to make large-scale edits on a manuscript because everything she typed had to be spelled back to her for approval. Minor line edits would be easy enough, but not big structural changes. (I wonder if it’s similar with work that’s been dictated, like May Sarton’s later journals.)

Keller went on to write 12 more books. It would be interesting to follow up with another one to learn about her travels and philanthropic work. For insight into a different aspect of her life – bearing in mind that it’s fiction – I recommend Helen Keller in Love by Rosie Sultan. In a couple of places Keller mentions Laura Bridgman, her less famous predecessor in the deaf–blind community; Kimberly Elkins’ 2014 What Is Visible is a stunning novel about Bridgman.

For such a concise book – running to just 75 pages in my Dover Thrift Editions paperback – this packs in so much. Indeed, I’ve found more to talk about in this review than I might have expected. The elements that most intrigued me were her early learning about abstractions like love and thought, and her enthusiastic rundown of her favorite books: “In a word, literature is my Utopia. Here I am not disenfranchised. No barrier of the senses shuts me out from the sweet, gracious discourse of my book-friends.”

It’s possible some readers will find her writing style old-fashioned. It would be hard to forget you’re reading a work from nearly 120 years ago, given the sentimentality and religious metaphors. But the book moves briskly between anecdotes, with no filler. I remained absorbed in Keller’s story throughout, and so admired her determination to obtain a quality education. I know we’re not supposed to refer to disabled authors’ work as “inspirational,” so instead I’ll call it both humbling and invigorating – a reminder of my privilege and of the force of the human will. (Secondhand purchase, Barter Books)