It’s the opening month of my new Love Your Library meme! I hope some of you will join me in writing about the libraries you use and what you’ve borrowed from them recently. I plan to treat these monthly posts as a sort of miscellany.

Although I likely won’t do thorough Library Checkout rundowns anymore, I’ll show photos of what I’ve borrowed, give links to reviews of a few recent reads, and then feature something random, such as a reading theme or library policy or display.

If it’s related to libraries, I want to hear about it! 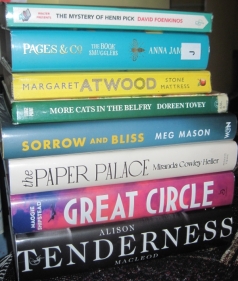 The Echo Chamber by John Boyne 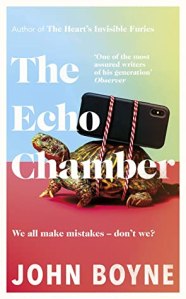 John Boyne is such a literary chameleon. He’s been John Irving (The Heart’s Invisible Furies), Patricia Highsmith (A Ladder to the Sky) and David Mitchell (A Traveller at the Gates of Wisdom). Now, with this Internet-age state-of-the-nation satire featuring variously abhorrent characters, he’s channelling the likes of Jamie Attenberg, Jonathan Coe, Patricia Lockwood, Lionel Shriver and Emma Straub. Every member of the Cleverley family is a morally compromised fake. Boyne gives his characters amusing tics, and there are also some tremendously funny set pieces, such as Nelson’s speed dating escapade and George’s public outbursts. He links several storylines through the Ukrainian dancer Pylyp, who’s slept with almost every character in the book and has Beverley petsit for his tortoise.

What is Boyne spoofing here? Mostly smartphone addiction, but also cancel culture. I imagined George as Hugh Bonneville throughout; indeed, the novel would lend itself very well to screen adaptation. And I loved how Beverley’s new ghostwriter, never given any name beyond “the ghost,” feels like the most real and perceptive character of all. Surely one of the funniest books I will read this year. (Full review).

Beautiful World, Where Are You by Sally Rooney 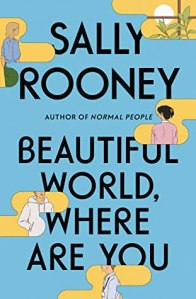 I was one of those rare readers who didn’t think so much of Normal People, so to me this felt like a return to form. Conversations with Friends was a surprise hit with me back in 2017 when I read it as part of the Sunday Times Young Writer of the Year Award shadow panel the year she won. The themes here are much the same: friendship, nostalgia, sex, communication and the search for meaning. BWWAY is that little bit more existential: through the long-form e-mail correspondence between two friends from college, novelist Alice and literary magazine editor Eileen, we imbibe a lot of philosophizing about history, aesthetics and culture, and musings on the purpose of an individual life against the backdrop of the potential extinction of the species.

Through their relationships with Felix (a rough-around-the-edges warehouse worker) and Simon (slightly older and involved in politics), Rooney explores the question of whether lasting bonds can be formed despite perceived differences of class and intelligence. The background of Alice’s nervous breakdown and Simon’s Catholicism also bring in sensitive treatments of mental illness and faith. (Full review).

I spotted a few of these during my volunteer shelving and then sought out a couple more. All five are picture books composed by authors not known for their writing for children.

Islandborn by Junot Díaz (illus. Leo Espinosa): “Every kid in Lola’s school was from somewhere else.” When the teacher asks them all to draw a picture of the country they came from, plucky Lola doesn’t know how to depict the Island. Since she left as a baby, she has to interview relatives and neighbours for their lasting impressions. For one man it’s mangoes so sweet they make you cry; for her grandmother it’s dolphins near the beach. She gathers the memories into a vibrant booklet. The 2D cut-paper style reminded me of Ezra Jack Keats.

The Islanders by Helen Dunmore (illus. Rebecca Cobb): Robbie and his family are back in Cornwall to visit Tamsin and her family. These two are the best of friends and explore along the beach together, creating their own little island by digging a channel and making a dam. As the week’s holiday comes toward an end, a magical night-time journey makes them wonder if their wish to make their island life their real life forever could come true. The brightly coloured paint and crayon illustrations are a little bit Charlie and Lola and very cute.

Rose Blanche by Ian McEwan (illus. Roberto Innocenti): Patriotism is assumed for the title character and her mother as they cheer German soldiers heading off to war. There’s dramatic irony in Rose being our innocent witness to deprivations and abductions. One day she follows a truck out of town and past barriers and fences and stumbles onto a concentration camp. Seeing hungry children’s suffering, she starts bringing them food. Unfortunately, this gets pretty mawkish and, while I liked some of the tableau scenes – reminiscent of Brueghel or Stanley Spencer – the faces are awful. (Based on a story by Christophe Gallaz.)

Where Snow Angels Go by Maggie O’Farrell (illus. Daniela Jaglenka Terrazzini): The snow angel Sylvie made last winter comes back to her to serve as her guardian angel, saving her from illness and accident risks. If you’re familiar with O’Farrell’s memoir I Am, I Am, I Am, this presents a similar catalogue of near-misses. For a picture book, it has a lot of words – several paragraphs’ worth on most of its 70 pages – so I imagine it’s more suitable for ages seven and up. I loved the fairy tale atmosphere, touches of humour, and drawing style.

Weirdo by Zadie Smith and Nick Laird (illus. Magenta Fox): Kit’s birthday present is Maud, a guinea pig in a judo uniform. None of the other household pets – Derrick the cockatoo, Dora the cat, and Bob the pug – know what to make of her. Like in The Secret Life of Pets, the pets take over, interacting while everyone’s out at school and work. At first Maud tries making herself like the others, but after she spends an afternoon with an eccentric neighbour she realizes all she needs to be is herself. It’s not the first time married couple Smith and Laird have published an in-joke (their 2018 releases – an essay collection and a book of poems, respectively – are both entitled Feel Free): Kit is their daughter’s name and Maud is their pug’s. But this was cute enough to let them off.