Three on a Theme: “Heart”

From a vibrant novel about trauma and second chances to a cultural history of our knowledge of the organ and its symbols, via a true story of the effects of being struck by lightning, what might these three disparate books have to tell us about the human heart on Valentine’s Day?

America Is Not the Heart by Elaine Castillo (2018)

This was criminally overlooked a few years ago, though I do remember Naomi F. featuring it on The Writes of Womxn. Set in the early 1990s in the Filipino immigrant neighborhoods of the Bay Area in California, it throws you into an unfamiliar culture at the deep end. There are lots of different ethnicities mentioned, and snippets of various languages (not just Tagalog, the one I knew of previously) run through the text, sometimes translated but often not. It’s a complex, confident debut novel that references episodes from the history of the Philippines of which I was mostly ignorant – genocide and reforms, dictatorship and a Marxist resistance.

Geronima is a family name for the De Veras; not many realize that Hero, in her mid-thirties and newly arrived in the USA as an undocumented immigrant, and her cousin Roni, her uncle Pol’s seven-year-old daughter, share the same first name. Hero is estranged from her wealthy parents: they were friendly with the Marcos clan, while she ran away to serve as a doctor in the New People’s Army for 10 years. We gradually learn that she was held in a prison camp for two years and subjected to painful interrogations. Still psychologically as well as physically marked by the torture, she is reluctant to trust anyone. She stays under the radar, just taking Roni to and from school and looking after her while her parents are at work.

When Roni’s mother Paz, a medical professional, turns to traditional practices for help with Roni’s extreme eczema, Hero takes Roni to the Boy’s BBQ & Grill / Mai’s Hair and Beauty complex to see Adela Cabugao, a Filipina faith healer. The restaurant becomes a refuge for Hero and Roni – a place where they hang out with Adela’s granddaughter, Rosalyn, and her friends in the long hours Paz is away at her hospital jobs, eating and watching videos or reading Asian comics. Over the next few years Rosalyn introduces Hero to American holidays and customs. Castillo is matter-of-fact about Hero’s hook-ups with guys and girls but never strident about a bisexuality label. Hero pursues sex but remains wary of romance.

The everydayness of life here – car rides, cassette tapes, job applications, foil trays of food – contrasts with too-climactic memories. Though the plot can meander, there’s forward motion in that Hero shifts from a survival mindset into an assurance of safety that allows her to start rebuilding her life. I loved the 1990s as a setting. The characters shine and the dialogue (not in speech marks) feels utterly authentic in this fresh immigration story. My only minor disappointment was that second-person narration does not recur beyond a chapter about Paz and one about Rosalyn. The title riffs on a classic of Filipino American literature, America Is in the Heart (1946) by Carlos Bulosan, though I didn’t explore that comparison; it’s a novel that opens up real Google wormholes, should you take up the challenge. Castillo’s vibrant, distinctive voice reminded me of authors from Chimamanda Ngozi Adichie to Viet Thanh Nguyen. Please tell me she has another book in the works.

Favorite line: “Baggage means no matter how far you go, no matter how many times you immigrate, there are countries in you you’ll never leave.”

Words about the heart:

“Hero had no truck with people for whom the heart was a dreamt-up thing, held together by divine saliva, a place where gods of love still made their beds. A heart was something you could buy on the street, six to a skewer … served with garlicky rice and atsuete oil.”

“Hero had never even felt ambivalence toward Pol … She’d only ever known what it felt like to love him, to keep the minor altar of admiration for him in her heart well cleaned, its flowers rotless and blooming. What she hadn’t known was that her love was a room, cavernous, and hate could enter there, too; curl up in the same bed, blanketed and sleep-warm.”

“May tinik sa puso. You know what that means? Like she has a fishbone in the heart. She’s angry about something.”

Source: Free from a neighbor 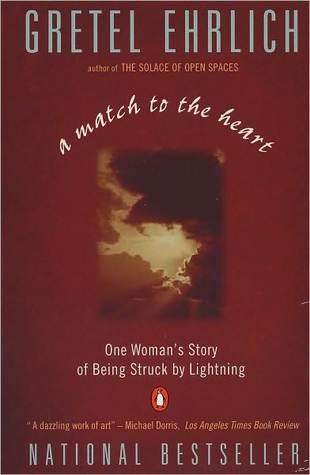 In August 1991, as a summer thunderstorm approached her Wyoming ranch, Ehrlich was struck by lightning. Although she woke up in a pool of blood, her dogs stayed by her side and she was able to haul herself the quarter-mile home and call 911 before she collapsed completely. Being hit by so much electricity (10–30 million volts) had lasting effects on her health. Her heart rhythms were off and she struggled with fatigue for years to come. In a sense, she had died and come back to a subtly different life.

After relocating to the California coast, she shadows her cardiologist and observes open-heart surgery, attends the annual Lightning Strike and Electric Shock Conference, and explores a new liminal land of beaches and islands. Again and again, she uses metaphors of the bardo and the phoenix to make sense of the in-between state she perhaps still inhabits. Full-on medical but also intriguingly mystical, this is another solid memoir from a phenomenal author. I know of her more as a nature/travel writer (This Cold Heaven is fantastic) and have another of her books on the shelf, The Solace of Open Spaces.

Words about the heart:

“Above and beyond the drama of cardiac arrest, or the threat of it, is the metaphorical territory of the heart: if love desists, if passion arrests, if compassion stops circulating through the arteries of society, then civilization, such as it is, will stop.”

“The thoracic cavity must have been the place where human music began, the first rhythm was the beat of the heart, and after that initial thump, waltzes and nocturnes, preludes and tangos rang out, straight up through flesh and capillary, nerve ganglion and epidermal layer, resonating in sternum bone: it wasn’t light that created the world but sound.”

Heart: The Story of Its Myths and Meanings by Gail Godwin (2001)

I’d read one novel and one memoir by Godwin and was excited to learn that she had once written a wide-ranging study of the religious and literary meanings overlaid on the heart. While there are some interesting pinpricks here, the delivery is shaky: she starts off with a dull, quotation-stuffed, chronological timeline, all too thorough in its plod from the Epic of Gilgamesh to the Industrial Revolution. I quickly resorted to skimming and my eye alighted on Chinese philosophy (“True knowledge, Confucius taught, lies in the heart. He created and taught an ethical system that emphasized ‘human-heartedness,’ stressing balance in the heart”) and Dickens’s juxtaposition of facts and emotion in Hard Times.

Part Two, “Heart Themes in Life and Art,” initially seemed more promising in that it opens with the personal stories of her half-brother’s death in a murder–suicide and her mother’s fatal heart attack while driving a car, but I didn’t glean much from her close readings of, e.g. Joseph Conrad and Elizabeth Bowen. Still, I’ll keep this on the shelf as a reference book for any specific research I might do in the future.

Source: Bookbarn International on February 2020 visit (my last time there)

If you read just one … It’s got to be America Is Not the Heart. (Though, if you’re also interested in first-person medical accounts, add on A Match to the Heart.)