An Anthology for the Coming Winter

“the short dark days of winter

as a bully to his mother.”

~from “Skulking,” a poem from Helen Dunmore’s The Malarkey

After more than ten years here, I still struggle with English winters. It’s not that they’re colder than what I grew up experiencing on America’s east coast. In terms of temperatures, snowfall and ice buildup, there’s no real comparison. I keenly remember the winter of 2004, when the wind-chill was about 10° F and all the fountains in Washington, D.C. froze solid.

But English winters have particularly disheartening qualities: they’re overwhelmingly dark, bone-seepingly wet, and seemingly endless. I’ll never forget when, in my first-ever winter in England (during my study abroad year in 2003), I looked out a University of Reading library window around 3:00 in the afternoon and realized the sun was setting behind the trees. 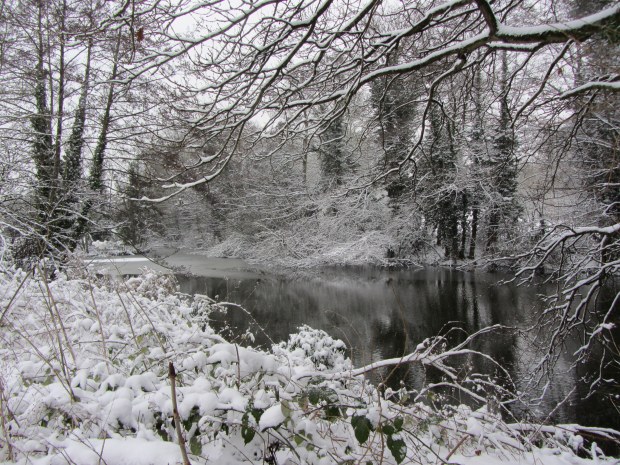 A snowy day on the University of Reading campus (Whiteknights Lake). Photo by Chris Foster.

All these years later, I still find that dim mid-afternoon light depressing, and the damp cold nearly intolerable. In our study abroad information packet we were warned that British interiors are kept 10 degrees cooler than American ones. But because we’re both thrifty and environmentally conscious, our house is significantly colder. Most of the time I’ll wear four to seven layers and huddle under blankets rather than turn on the heat – why warm a whole house for one person and one cat?  I’m not entirely joking when I say to my husband that I wish I could hibernate from roughly November to April. Just wake me up for Christmas.

Ahhhhhh, Christmas, which the English do wonderfully – much better than Americans, in my opinion. Carol services, dense dried fruit desserts, booze in and with everything, a gentler tinge to the commercialism, plus maybe some nostalgic Dickensian tint I’m giving it all in my mind. I’ve had some wonderful Christmases here over the past 12 years. 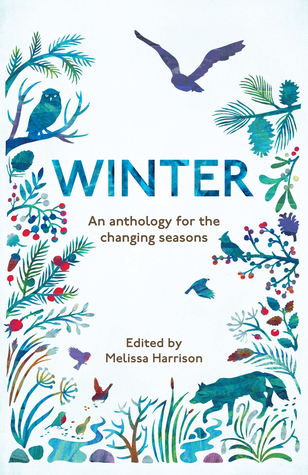 So I’m ambivalent about winter, and was interested to see how the authors collected in Melissa Harrison’s final seasonal anthology would explore its inherent contradictions. I especially appreciated the views of outsiders. Jini Reddy, a Quebec native, calls British winters “a long, grey sigh or a drawn-out ache.” In two of my favorite pieces, Christina McLeish and Nakul Krishna – from Australia and India, respectively – compare the warm, sunny winters they experienced in their homelands with their early experiences in Britain. McLeish remembers finding a disembodied badger paw on a frosty day during one of her first winters in England, while Krishna tells of a time he spent dogsitting in Oxford when all the students were on break. His decorous, timeless prose reminded me of J.R. Ackerley’s.

The series is in support of the Wildlife Trusts, and a key message of this volume in particular is that nature is always there to be experienced – even in what feels like a dead time of year. Kate Blincoe observes an urban starling murmuration in an essay that nicely blends the lofty and the earthy; Nicola Chester takes a wintry beach walk and documents what she finds in the strandline, such as goose barnacles; Joseph Addison celebrates the pleasures of a winter garden; Patrick Barkham examines the ways butterfly life* continues through the winter, usually as eggs; and Richard Adams (author of Watership Down) insists, “Wild flowers are like pubs. There are generally one or two open somewhere, if only you look hard enough.”

As in the other volumes, Harrison has chosen a lovely mixture of older and contemporary pieces. Occasional passages from Gilbert White and Thomas Furly Forster on the timing of natural phenomena help create a sense of chronological progression, from November through to February. The contemporary nature writing scene is represented by previously published material from Robert Macfarlane and Kathleen Jamie. Classic literature is here in the opening of Charles Dickens’s Bleak House and the Great Frost passage from Virginia Woolf’s Orlando. There are also excerpts from Coleridge’s diary and freed slave Olaudah Equiano’s account of seeing snow for the first time. In general, this volume is better at including diverse voices, like the final piece from Anita Sethi on her family’s unlikely garden in Manchester. 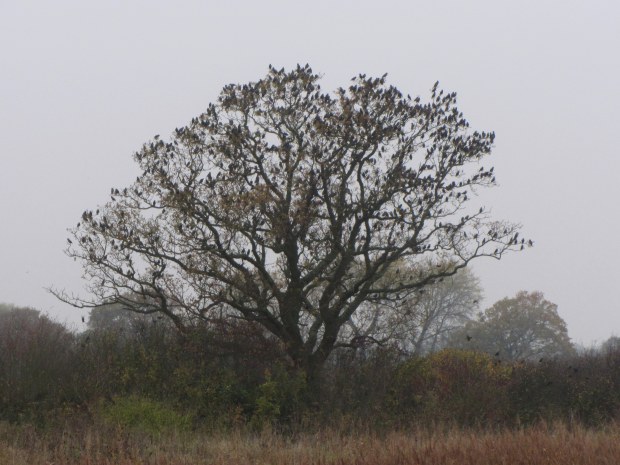 A starling roost at Otmoor RSPB Reserve in Oxfordshire. Photo by Chris Foster.

Christmas doesn’t really appear here; it’s a book about the natural year rather than the cultural year. But another event does, very powerfully: In another of my top few pieces, Jon Dunn (who authored my favorite piece in Autumn) tells how the overpowering darkness of a Shetland winter is broken by the defiant Up Helly Aa festival, in which the residents dress up as Vikings and ceremonially burn a longboat. Life goes on, no matter how bleak everything seems. That’s an important thing to keep in mind after all the troubling events of 2016.

*My husband’s piece, positioned between John Fowles’s and Richard Jeffries’s, is also about the surprising insect life that can be discovered in the winter.

My review of Summer.

My review of Autumn.

[I came late to the series so will be reading, but not reviewing, Spring next year.]

With thanks to Jennie Condell at Elliott & Thompson for the free copy for review.