Over halfway through the summer and my numbers are looking poor. It’s not that I’m not reading a ton – in general, I am – it’s just that I’m having trouble finishing any foodie books. I’m in the middle of two food-related memoirs plus Cakes and Ale by W. Somerset Maugham, and have recently started buddy-reading Mother’s Milk by Edward St Aubyn with Annabel, so more reviews will be along eventually, but I predict August will be a scramble.

Today I review an in-your-face tell-all about the life of a chef, and a novel set between Japan and the United States that exposes the seamy side of meat production. A lite road trip and an iffy California classic follow as bonuses.

Kitchen Confidential: Adventures in the Culinary Underbelly by Anthony Bourdain (2000) 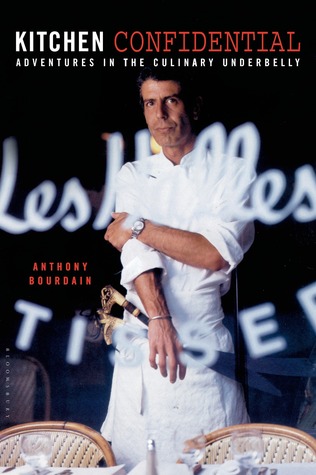 (20 Books of Summer, #5) “Get that dried crap away from my bird!” That random line about herbs is one my husband and I remember from a Bourdain TV program and occasionally quote to each other. It’s a mild curse compared to the standard fare in this flashy memoir about what really goes on in restaurant kitchens. His is a macho, vulgar world of sex and drugs. In the “wilderness years” before he opened his Les Halles restaurant, Bourdain worked in kitchens in Baltimore and New York City and was addicted to heroin and cocaine. Although he eventually cleaned up his act, he would always rely on cigarettes and alcohol to get through ridiculously long days on his feet.

From “Appetizer” to “Coffee and a Cigarette,” the book is organized like a luxury meal. Bourdain charts his development as a chef, starting with a childhood summer in France during which he ate vichyssoise and oysters for the first time and learned that food “could be important … an event” and describing his first cooking job in Provincetown and his time at the Culinary Institute of America. He also discusses restaurant practices and hierarchy, and home cook cheats and essentials. (I learned that you should never order fish in a restaurant on a Monday – it’ll be left over from Thursday’s order.) The pen portraits of his crazy sous-chef and baker are particularly amusing; other subjects include a three-star chef he envies and the dedicated Latino immigrants who are the mainstay of his kitchen staff.

My dad is not a reader but he is a foodie, and he has read Bourdain’s nonfiction (and watched all his shows), so I felt like I was continuing a family tradition in reading this. I loved my first taste of Bourdain’s writing: he’s brash, passionate, and hilariously scornful of celebrity chefs and vegetarianism (“the enemy of everything good and decent in the human spirit, an affront to all I stand for, the pure enjoyment of food”). Being in charge of a restaurant sounds manic, yet you can see why some would find it addictive. How ironic, though, to find a whole seven references to suicide in this book. Sometimes he’s joking; sometimes he’s talking about chefs he’s heard about who couldn’t take the pressure. Eighteen years after this came out, he, too, would kill himself.

(See also this article about rereading Bourdain in the 20th anniversary year of Kitchen Confidential.)

(These two are linked by a late chapter in the Bourdain, “Mission to Tokyo,” in which he advises on a new Les Halles offshoot in Japan and gorges himself on seafood delights.) 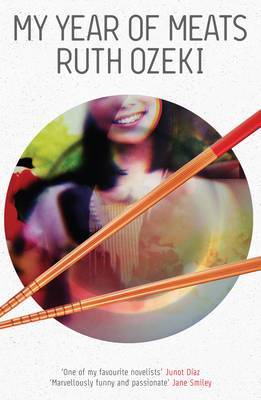 (20 Books of Summer, #6) I don’t know what took me so long to read another novel by Ruth Ozeki after A Tale for the Time Being, one of my favorite books of 2013. This is nearly as fresh, vibrant and strange. Set in 1991, it focuses on the making of a Japanese documentary series, My American Wife, sponsored by a beef marketing firm. Japanese American filmmaker Jane Takagi-Little is tasked with finding all-American families and capturing their daily lives – and best meat recipes. The traditional values and virtues of her two countries are in stark contrast, as are Main Street/Ye Olde America and the burgeoning Walmart culture.

There is a clear message here about cheapness and commodification, but Ozeki filters it through the wrenching stories of two women with fertility problems: Jane, whose reproductive system was damaged by DES, a synthetic estrogen her mother took during pregnancy to prevent a miscarriage; and Akiko, the wife of Jane’s boss, who struggles with an eating disorder and domestic violence.

Jane starts sneaking controversial subjects into her shoots: a lesbian couple, a family formed by interracial adoption, and a five-year-old who has already undergone puberty due to the hormones used on her family’s cattle feedlot. What is “natural,” and what gets branded alien or invasive? From the kudzu that strangles the South to a murdered Japanese exchange student, Ozeki probes the related issues of nativism and racism. Her two protagonists’ stories – one in the first person; the other in the third person – come together in a surprising manner as Jane decides that she has a more pressing obligation than creating a diverting television show.

This is a bold if at times discomforting novel. At first it brought to mind the exaggerated comedy of Julian Barnes’s England, England and Jane Smiley’s Moo, but as it grew darker it reminded me more of Han Kang’s The Vegetarian. It’s tricky, when a work of fiction tackles ethical or environmental matters, to balance storytelling and consciousness-raising, but Ozeki pulls it off with style. The only aspect that didn’t mean much to me, perhaps simply because of my unfamiliarity, was the excerpts from The Pillow Book of Shōnagon. How sad to think that I only have one more Ozeki awaiting me, All Over Creation. She averages a book every 5‒10 years; we can only hope that another is on the way soon.

I picked up another two food-adjacent books that didn’t work for me, though I ended up skimming them to the end.

America Unchained: A Freewheeling Roadtrip in Search of Non-Corporate USA by Dave Gorman (2008) 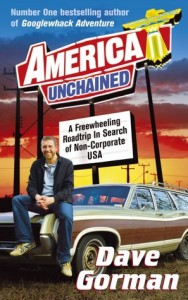 (20 Books of Summer, #7) I read the first couple of chapters, in which he plans his adventure, and then started skimming. I expected this to be a breezy read I would race through, but the voice was neither inviting nor funny. I also hoped to find more about non-chain supermarkets and restaurants – that’s why I put this on the pile for my foodie challenge in the first place – but, from a skim, it mostly seemed to be about car trouble, gas stations and fleabag motels. The only food-related moments are when Gorman (a vegetarian) downs three fast food burgers and orders of fries in 10 minutes and, predictably, vomits them all back up; and when he stops at an old-fashioned soda fountain for breakfast. 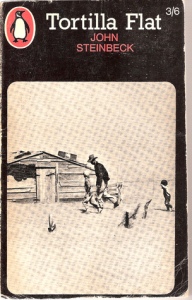 (20 Books of Summer, #8) I read the first 25 pages and then started skimming. This is a story of a group of friends – paisanos, of mixed Mexican, Native American and Caucasian blood – in Monterey, California. During World War I, Danny serves as a mule driver and Pilon is in the infantry. When discharged from the Army, they return to Tortilla Flat, where Danny has inherited two houses. He lives in one and Pilon is his tenant in the other (though Danny will never see a penny in rent). They’re a pair of loveable scamps, like Huck Finn all grown up, stealing wine and chickens left and right.

Steinbeck novels seem to fall into two camps for me. This is one of his inconsequential, largely unlikable novellas (like The Pearl and The Red Pony, which I studied in school – I’m lucky they didn’t put me off Steinbeck forever), whereas The Grapes of Wrath and East of Eden are masterful. It may also have something to do with the slight air of condescension towards characters of a different race: Steinbeck renders their speech with “thee” and “thou,” trying to imitate a Romance language’s informal pronouns, but it feels dated and alienating.