I’m catching up on blogs and getting back into the swing of work after a week’s staycation hosting my mom and stepdad and taking them on daytrips to lots of local sites: Highclere Castle (“Downton Abbey”), Bath, Avebury, the south coast, Sandham Memorial Chapel, the Kennet & Avon canal, and Mottisfont Abbey.

Today’s contributions to my colour-themed summer reading are both nonfiction: a forthright memoir from a female surgeon and a light-hearted record of multiple seasons of hawk-watching in Central Park.

Trying to keep herself alert seven hours into assisting with a neck surgery, Weston recites to herself a list of dyes used to stain tissues for microscopy: methylene blue, acridine orange, saffron, malachite green, Tyrian purple, Hoffman’s violet, direct red. This is how the book opens, and of course, red being the colour of blood, it shows up frequently in what follows. She tells (anonymized) stories of people she has treated, of all ages and from all backgrounds, both during her training and after she specialized in ear, nose and throat surgery.

Like Henry Marsh in Admissions, she expresses regret for moments when she was in a rush or trying to impress seniors and didn’t give the best patient-focused care she could have. Some patients even surprise her into changing her mind, such as about the morality of plastic surgery.

The accounts of individual surgeries are detailed and sometimes gory: morbidly delicious for me, but definitely not for the squeamish.

Blood trickled in a stream down the inside of my wrist onto the plasticky gown, and then dripped off me and onto the drape. It collected in a green valley and was congealing there like a small garnet jelly. I lost my balance slightly as the breast was cut off.

Surgery is still a male-dominated field, and I’ve sensed unpleasant machismo from surgeon authors before (Stephen Westaby’s The Knife’s Edge). As a woman in medicine, Weston is keenly aware of the difficult balance to be struck between confidence and compassion.

To be a good doctor, you have to master a paradoxical art. You need to get close to a patient so that they will tell you things and you will understand what they mean. But you also have to keep distant enough not to get too affected.

It is no longer enough to be technically proficient; nowadays, we need to be nice. And this presents the modern surgeon with a great challenge: how to combine a necessary degree of toughness with an equally important ability to be gentle.

Initially, her bedside manner is on the brusque side, but when she becomes a mother this changes. Treating a sick baby in the ITU, she realizes she barely sees her own child for more than five minutes per evening. In the final paragraphs, she quits her career-track consultant job to work part-time. “I chose a life with more home in it.” It’s an abrupt ending to a 180-page memoir that I thoroughly enjoyed but that left me wanting more. (Secondhand purchase from Oxfam Books, Reading)

Red-Tails in Love: A Wildlife Drama in Central Park by Marie Winn (1998)

In the early 1990s, Wall Street Journal columnist Winn fell in with an earnest group of birdwatchers who monitor the daily activity in New York City’s Central Park, a haven for wildlife. Through the Register, a logbook stored in a boathouse, they share sightings and track patterns. Relative rarities thrive and breed each year. Before long the book zeroes in on a famous pair of red-tailed hawks, “Pale Male” and a series of females. Winn emphasizes the “drama” of her subtitle, arranging the content into Acts and Scenes that span about five years.

Wild birds face many risks, most of them the fault of humans, and there are some distressing losses here. It is thus a triumph when Pale Male and his mate successfully raise three chicks on the façade of a Fifth Avenue apartment building (home to Mary Tyler Moore, with Woody Allen across the street). The birdwatchers are vigilant, sending letters to the apartment manager and calling park staff to ensure the birds are left in peace. No doubt it’s easier to disseminate information and assign responsibility now what with WhatsApp and Twitter. Indeed, I found the book a little dated and the anthropomorphizing somewhat over-the-top, but Winn makes a sweet, rollicking yarn out of people getting invested in nature. (Secondhand purchase from Clock Tower Books, Hay-on-Wye)

Coming up next: Three green, one black, one gold (and maybe a rainbow bonus).

Would you be interested in reading one of these?

I aim to read one book of 500+ pages in each month of 2017. My first Doorstopper of the Month is City on Fire, the 2015 debut novel from Garth Risk Hallberg. It’s common knowledge that Hallberg earned a six-figure advance for this 911-page evocation of a revolutionary time in New York City. When it was first published I didn’t think I had the fortitude to tackle it and had in mind to wait for the inevitable miniseries instead, but when I won a copy in a goodie bag from Hungerford Bookshop I decided to go for it. I started the novel just after Christmas and finished it a few days ago, so like Donna Tartt’s The Goldfinch it took me roughly a month to read because I had many other books on the go at the same time. 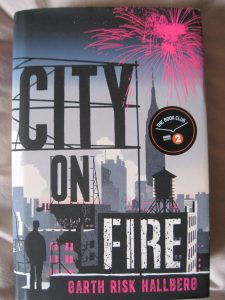 Opening on Christmas Eve 1976 and peaking with the July 1977 blackout, the novel brings its diverse cast together through a shooting in Central Park. Insider traders, the aimless second generation of some of the city’s wealthiest aristocrats, anarchist punk rockers, an African-American schoolteacher, a journalist and his Vietnamese neighbor, a fireworks manufacturer, a policeman crippled by childhood polio – the characters fill in the broad canvas of the city, everywhere from Wall Street boardrooms to drug dens.

The real achievement is not how Hallberg draws each character but how he fits them all together. The closest comparison I can make is with one of Dickens’s long novels, say David Copperfield, where, especially as you approach the conclusion, you get surprising meet-ups of figures from different realms of life. The relaxed chronology reaches back to the 1950s and forward to 2003 to give hints of where these people came from and what fate holds for them.

City on Fire might sound like a crime drama – I can see a miniseries working in a manner comparable to The Wire – and the mystery of who shot Samantha Cicciaro does indeed last from about page 80 to page 800-something. But finding out who shot her and why (or why investment bankers would be funding a posse of anarchists, or who pushed a journalist into the river) is something of an anticlimax. The journey is the point, and the city is the real star, even though it’s described with a kind of affectionate disdain in the passages that follow:

The stench of the basement level reached him even here, like hot-dog water mixed with roofing tar and left in an alley to rot

The park on New Year’s Day had been a blasted whiteness, or a series of them, hemmed in by black trees like sheets snagged on barbed wire.

It seemed impossible that he’d chosen to live here, at a latitude where spring was a semantic variation on winter, in a grid whose rigid geometry only a Greek or a builder of prisons could love, in a city that made its own gravy when it rained. Taxis continued to stream toward the tunnel, like the damned toward a Boschian hellmouth. Screaming people staggered past below. Impossible, that he now footed the rent entire, two hundred bucks monthly for the privilege of pressing his cheek to the window and still not being able to see spectacular Midtown views. Impossible, that the cinderblock planter on the fire escape could ever have produced flowers.

Or wasn’t this city really the sum of every little selfishness, every ignorance, every act of laziness and mistrust and unkindness ever committed by anybody who lived there, as well as of everything she personally had loved?

Mercer Goodman, Jenny Nguyen and Richard Groskoph were my three favorite characters, and I might have liked to see more of each of them. I also felt that the book as a whole was quite baggy, and the six Interludes that separate the seven large sections, remarkable as they are (especially an entire fanzine, complete with photographs, comics and handwritten articles), weren’t strictly necessary.

It’s definitely a chunkster. For the longest while it felt like I wasn’t making a dent.

Still, I couldn’t help but be impressed by Hallberg’s ambition, and on the sentence level the novel is always well wrought and surprising, with especially lovely last lines that are like a benediction. Though it’s mostly set in the 1970s, this never feels dated; in fact, I thought it thoroughly relevant for our time: “even now they’re writing over history, finding ways to tell you what you just saw doesn’t exist. The big, bad anarchic city, people looting, ooga-booga. Better to trust the developers and the cops.”

I won’t pretend that a 900+-page book isn’t a massive undertaking, and I have some trusted bloggers and Goodreads friends who gave up on this after 250 or 450 pages. So I can’t promise you that you’ll think it’s worth the effort, though for me it was. A modern twist on the Dickensian state-of-society novel, it’s one I’d recommend to fans of Jonathan Franzen, Bill Clegg and Jennifer Egan.