I don’t think I realized how serious the Russian invasion of Ukraine was until I heard a neighbour who is in the Royal Navy speak of it in the same breath as 9/11.

It is so hard to predict the end game. Wars can last years, even decades, and a situation like this could draw many more countries in. Like with Covid, there could be much longer term effects than we’re currently expecting.

I attended a candlelit vigil for Ukraine in the town square on Friday.

I donated to the Disasters Emergency Committee’s Ukraine Humanitarian Appeal at church yesterday morning, and will donate more. (Those in other countries might choose to send money through Doctors Without Borders, the Red Cross, or UNICEF.)

And I was prompted by a friend’s post to assemble this “Solidarity Stack” on Instagram over the weekend: 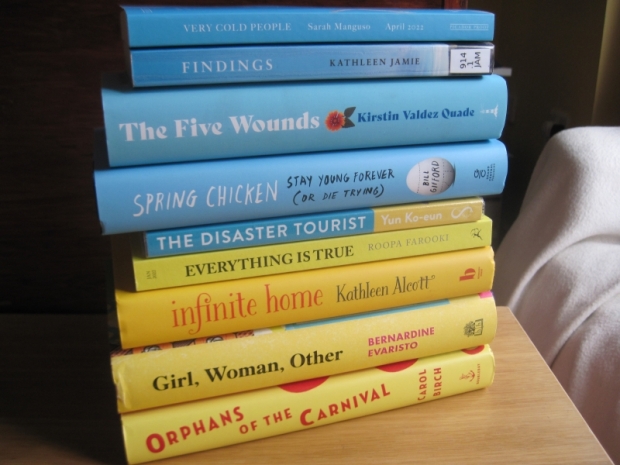 But I still feel like I have done so little.

I can hardly bear to keep up with the news; we don’t have a television or get a newspaper and I never listen to the radio, but I do see the headlines through my Facebook and Twitter feeds. Some heartening stories, but mostly horrible ones.

I wish I knew more about Ukraine. The only books I can think of that I’ve read by Ukrainians and Ukrainian Americans are Deaf Republic by Ilya Kaminsky, Death and the Penguin by Andrey Kurkov*, and My Dead Parents by Anya Yurchyshyn. There is a Ukraine setting to The Summer Guest by Alison Anderson, and Henry Marsh goes on medical missions to Ukraine in Do No Harm. Everything Is Illuminated by Jonathan Safran Foer is about his Ukrainian Jewish heritage (as is his mother Esther’s I Want You to Know We’re Still Here); The Reason Why by Cecil Woodham-Smith and The Rose of Sebastopol by Katharine McMahon are about the Crimean War.

Over the past couple of weeks a number of Ukrainian reading lists have come out, like this one from Book Riot. Ron Charles (of the Washington Post) also put me onto I Will Die in a Foreign Land by Kalani Pickhart, which is about the 2014 revolution in Ukraine (when Putin tried to annex the Crimea). A portion of her proceeds will be donated to the Ukrainian Red Cross.

*Apparently on a most wanted list for his vocal opposition to Putin; his work has been banned in Russia since 2014.

Any other thoughts on what we can do to help, understand, and work for the good?