Autumnal Children’s and YA Books

Browsing through old magazines, I found a fun BookPage reading list from October 2019 entitled “Pumpkin spice latte literature.” It asks, “what if autumn were distilled into a book? The mixture of crispness and warmth, the thrill of possibility, the bittersweetness of change—these books are pure pumpkin spice.” I love the lateral thinking that came up with

I’ve read the first three, and am keen to catch up on Akbar’s debut poetry collection after loving Pilgrim Bell this summer. I’m only unlikely to pick up Rogerson’s fantasy. In any case, I enjoyed seeing how the editors came up with their selections.

I tend to be rather more literal with my seasonal reading recommendations. Does it have autumn in the title or as a setting?! Is it about pumpkins or Halloween?

This year I happen to have amassed all children’s and YA selections.

I’ll admit it: it was Angela Harding’s gorgeous cover illustration that drew me to this one. But I found a story that lived up to it, too. October, who has just turned 11 and is named after her birth month, lives in the woods with her father. Their shelter and their ways are fairly primitive, but it’s what October knows and loves. When her father has an accident and she’s forced into joining her mother’s London life, her only consolations are her rescued barn owl chick, Stig, and the mudlarking hobby she takes up with her new friend, Yusuf.

The child’s perspective is well rendered through artful run-on sentences. Balen is careful to show the consequences of October’s decisions and to present advantages as well as disadvantages so it’s not just countryside = good, city = bad. I thought the father’s recovery a bit too quick, but overall, this middle grade novel was a great read for any age, as well as one to get kids thinking about illness and loss. And how about these heart-tugging last lines? “There are stories everywhere and I want to tell them all. And all the world is wild and waiting for me.” (Public library)

The second in the quartet of seasonal “Brambly Hedge” stories. Autumn is a time for stocking the pantry shelves with preserves, so the mice are out gathering berries, fruit and mushrooms. Young Primrose wanders off, inadvertently causing alarm – though all she does is meet a pair of elderly harvest mice and stay for tea and cake in their round nest amid the cornstalks. I love all the little touches in the illustrations: the patchwork tea cosy matches the quilt on the bed one floor up, and nearly every page is adorned with flowers and other foliage. After we get past the mild peril that seems to be de rigueur for any children’s book, all is returned to a comforting normal. Time to get the Winter volume out from the library. (Public library) 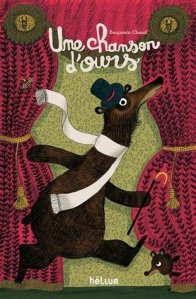 The first whole book I’ve read in French in many a year. I just about coped, given that it’s a picture book with not all that many words on a page; any vocabulary I didn’t know offhand, I could understand in context. It’s late into the autumn and Papa Bear is ready to start hibernating for the year, but Little Bear spies a late-flying bee and follows it out of the woods and all the way to the big city. Papa Bear, realizing his lad isn’t beside him in the cave, sets out in pursuit and bee, cub and bear all end up at the opera hall, to the great surprise of the audience. What will Papa do with his moment in the spotlight? This is a lovely book that, despite the whimsy, still teaches about the seasons and parent–child bonds as it offers a vision of how humans and animals could coexist. I’ve since found out that this was made into a series of four books, all available in English translation. (Little Free Library)

This YA graphic novel is set on a Nebraska pumpkin patch that’s more like Disney World than a simple field down the road. Josiah and Deja have worked together at the Succotash Hut for the last three autumns. Today they’re aware that it’s their final Halloween before leaving for college. Deja’s goal is to try every culinary delicacy the patch has to offer – a smorgasbord of foodstuffs that are likely to be utterly baffling to non-American readers: candy apples, Frito pie (even I hadn’t heard of this one), kettle corn, s’mores, and plenty of other saccharine confections.

Josiah’s goal, by contrast, is to catch the eye of Marcy, the beauty who works at the fudge stand. Deja convinces him to desert the Succotash Hut and go in pursuit of Marcy via as many food stands as possible. She’s willing to indulge his unrealistic fantasy even though, as a bisexual who’s dated just about everyone at the patch, she knows romance is sometimes not all it’s cracked up to be. Meanwhile, there’s an angry billy goat on the loose.

This is a fun and quick romp, and the ending genuinely surprised me. I liked the story better than the art, though – my main problem was that these teen characters look more like they’re 30 (Josiah, especially, looks almost haggard what with the sharp lines down the sides of his face – I guess they’re to give him a ‘chiselled’ jaw?), similar to that weird phenomenon of much older actors playing high schoolers. So, I laughed to see in an afterword conversation between Rowell and Hicks that one of the major things they changed from early mock-ups was making the protagonists look older. (Public library)

From picking the best pumpkin at the patch to going out trick-or-treating, this is a great introduction to Halloween traditions. It even gives step-by-step instructions for carving a jack-o’-lantern. The drawing style – generally 2D, and looking like it could be part cut paper collages, with some sponge painting – reminds me of Ezra Jack Keats and most of the characters are not white, which is refreshing. There are lots of little autumnal details to pick out in the two-page spreads, with a black cat and crows on most pages and a set of twins and a mouse on some others. The rhymes are either in couplets or ABCB patterns. Perfect October reading. (Public library)

Any super-autumnal reading for you this year?

Do you read children’s picture books and YA novels even if you (and any children) are well past that age – or is it just me?