This year I’m joining in Liz’s readalong for all of the Anne Tyler novels that I own and haven’t read yet – or at least the ones I can access; others are marooned in a box in the States. Earthly Possessions was Tyler’s seventh novel and is refreshingly different from the 12 of her books I’d read previously. (Liz’s review is here, and Cathy has also recently reviewed it here.) The action begins in a typical Maryland setting but soon hits the road. After years of coasting along unhappily, Charlotte Emory, 35, has finally decided to leave her preacher husband and their two children, and is at the bank in Clarion (a fictional town) to withdraw money for the journey. Jake Simms, recently escaped from the county jail, is here to get cash, too, and Charlotte is his sole hostage in the bungling robbery that follows.

The first-person narration struck me as rare for Tyler – though I’d have to go back to all the others I’ve read to confirm that they’re in the third-person omniscient, as in my memory – and the structure is very effective, alternating chapters about Jake and Charlotte’s hapless road trip to Florida with extended flashbacks to Charlotte’s earlier life, from childhood right up to the moment she decided to leave Saul. Her family background is similar to Daisy’s in Carol Shields’s The Stone Diaries: both characters had an overweight mother who didn’t realize she was pregnant until all of a sudden she gave birth to a daughter. After her father’s death, Charlotte felt obliged to take over his photographic studio and she and her mother had lodgers in their unusual turreted home beside a gas station. One of these lodgers was Saul. 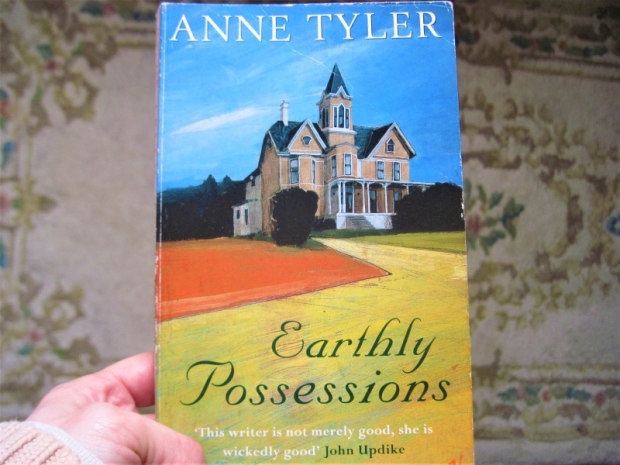 The title contrasts Saul’s heavenly concerns with the mess of life on earth. Charlotte is a Marie Kondo disciple avant la lettre, purging her home of superfluous furniture and cutting herself off from unnecessary people.

“My life has been a history of casting off encumbrances, paring down to the bare essentials, stripping for the journey. Possessions make me anxious.”

“I gave up hope. Then in order not to mind too much I loosened my roots, floated a few feet off, and grew to look at things with a faint, pleasant humorousness that spiced my nose like the beginnings of a sneeze. … My world began to seem…temporary. I saw that I must be planning to leave, eventually.”

A passive woman reaching a breaking point and leaving the life she’s been stuck in is a setup that anticipates Ladder of Years, one of my favourites from Tyler, and the protagonists’ emotional circuit and eventual destination are similar. Themes from The Clock Winder, and from her work in general, recur: a big, quirky family; mental illness; brothers squabbling over a woman; secrets; and bereavement. I enjoyed the touch of reverse Stockholm syndrome as Jake comes to rely on Charlotte for help with placating his pregnant girlfriend. And I was delighted to see a little mention of a character who “suffered one of his lapses and lost three hundred dollars at the Bowie Racetrack” – I grew up in Bowie and my parents lived on Race Track Road, just down from the (now derelict) track, for 13 years.

I’d never heard of this novel before I found it at a charity shop a few years ago. It ended up being a real gem, covering a lot of literal and psychological ground in its 200 small-format pages and doing something a bit different from the standard Tyler narrative while still staying true to her trademark themes and bittersweet sense of humour. I heartily recommend this one.

“I saw that all of us lived in a sort of web, criss-crossed by strings of love and need and worry.”

“Oh, I’ve never had the knack of knowing I was happy right while the happiness was going on.”

The 13 Tyler novels I’ve read, in order of preference (greatest to least), are:

Dinner at the Homesick Restaurant

Back When We Were Grown-ups

A Blue Spool of Thread

Redhead by the Side of the Road

Next up for me will be Saint Maybe in late June.