A Recommendation for August

Each month I aim to preview two to four books to be released in the next month that I have already read and can recommend. It’s looking thin on the ground for August because two of my most anticipated reads of the year were disappointments, and another August release I left unfinished; I give mini write-ups of these below. However, I’ve very much enjoyed What It Means When a Man Falls from the Sky, the debut story collection by Lesley Nneka Arimah, which came out in America in April but releases on the 24th over here; I’ll be reviewing it for Shiny New Books shortly. Also, I’m 20% into The Education of a Coroner by John Bateson (releases August 15th), a fascinating set of sometimes gory true crime case studies.

As for the one August book I’m currently able to wholeheartedly recommend, that is…

The Futilitarians: Our Year of Thinking, Drinking, Grieving, and Reading by Anne Gisleson

(Coming from Little, Brown and Company on the 22nd)

One for angsty, bookish types. In 2012 Anne Gisleson, a New Orleans-based creative writing teacher, her husband, sister and some friends formed an Existential Crisis Reading Group (which, for the record, I think would have been a better title). Each month they got together to discuss their lives and their set readings – both expected and off-beat selections, everything from Kafka and Tolstoy to Kingsley Amis and Clarice Lispector – over wine and snacks.

One of their texts, Arthur Koestler’s The Act of Creation, proposed the helpful notion of the Trivial and Tragic Planes. The Trivial is where we live everyday; the Tragic is where we’re transported when something awful happens. Gisleson had plenty of experience with the latter: not just the suicides of her younger twin sisters, a year and a half apart, and her father’s death from leukemia, but also the collective loss of Hurricane Katrina. She returns again and again to these sources of grief in her monthly chapters structured around the book group meetings, elegantly interweaving family stories and literary criticism.

I found the long quotes from the readings a little much – you probably shouldn’t pick this up if you haven’t the least interest in philosophy and aren’t much troubled by life’s big questions – but in general this is a fascinating, personal look at what makes life worth living when it might be shattered any second. I particularly loved the chapter in which the book club members creatively re-enact the Stations of the Cross for Easter and the sections about her father’s pro bono work as an attorney for death row inmates at Angola prison. Sometimes it really is a matter of life and death.

“Generations of parents have put their children to bed in this house and even if I haven’t quite figured out the why and the how of living, others have found reasons to keep moving things forward. In quiet moments I can feel the collective push of these ghost-hands on my back, nudging me on.”

And now for the ones I’m closer to lukewarm on…

(Reviews in the order in which I read the books.)

(Coming from Scribner on the 1st) 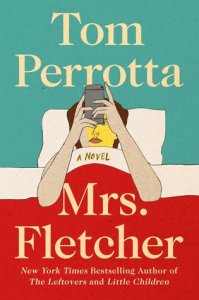 I enjoy Tom Perrotta’s novels: they’re funny, snappy, current and relatable; it’s no surprise they make great movies. I’ve somehow read seven of his nine books now, without even realizing it. Mrs. Fletcher is more of the same satire on suburban angst, but with an extra layer of raunchiness that struck me as unnecessary. It seemed something like a sexual box-ticking exercise. But for all the deliberately edgy content, this book isn’t really doing anything very groundbreaking; it’s the same old story of temptations and bad decisions, but with everything basically going back to a state of normality by the end. If you haven’t read any Perrotta before and are interested in giving his work a try, let me steer you towards Little Children instead. That’s his best book by far.

I read “We Love You Crispina” (13%), about the string of awful hovels a family of Chinese immigrants is forced to move between in early 1990s New York City. You’d think it would be unbearably sad reading about cockroaches and shared mattresses and her father’s mistress, but Zhang’s deadpan litanies are actually very funny: “After Woodside we moved to another floor, this time in my mom’s cousin’s friend’s sister’s apartment in Ocean Hill that would have been perfect except for the nights when rats ran over our faces while we were sleeping and even on the nights they didn’t, we were still being charged twice the cost of a shitty motel.” Perhaps I’m out of practice in reading short story collections, but after I finished this first story I felt absolutely no need to move on to the rest of the book.

(Coming on the 24th from Harper [USA] and Bloomsbury [UK])

Impressive in scope and structure, but rather frustrating. If you’re hoping for another History of Love, you’re likely to come away disappointed: while that book touched the heart; this one is mostly cerebral. Metafiction, the Kabbalah, and some alternative history featuring Kafka are a few of the major elements, so think about whether those topics attract or repel you. Looking a bit deeper, this is a book about Jewish self-invention and reinvention. Now, when I read a novel with a dual narrative, especially when the two strands share a partial setting – here, the Tel Aviv Hilton – I fully expect them to meet up at some point. In Forest Dark that never happens. At least, I don’t think so.* I sometimes found “Nicole” (the author character) insufferably clever and inward-gazing. All told, there’s a lot to think about here: more questions than answers, really. Interesting, for sure, but not the return to form I’d hoped for.

*Hop over to my Goodreads review to read the marked spoilers and chip in with comments!

What August books do you have on the docket?

Have you already read any that you can recommend?

Starting in mid-January I began surveying my shelves, library stack and Kindle for books with “love” in the title. Here are the six I had time to try; I didn’t get to Alain de Botton’s The Course of Love on my Kindle, nor my paperback copies of Iris Murdoch’s The Sacred and Profane Love Machine and Nancy Horan’s Loving Frank.

You’ll notice that a number of the books I’ve read aren’t that optimistic about love; in several cases the use of the word in the title even seems to be ironic. As Lady Montdore exclaims in Love in a Cold Climate, “Love indeed – whoever invented love ought to be shot.” So I can’t offer them as particularly romantic choices. But let’s start positively, with some pleasantly out-of-the-ordinary love poems.

From Me to You: Love Poems, U.A. Fanthorpe and R.V. Bailey

Ursula Fanthorpe and Rosie Bailey met as English teachers at the same Cheltenham school in their late twenties and were partners for nearly 40 years. None of the poems in this short volume are attributed, though I recognized a few from Fanthorpe’s Collected Poems. They’re not particularly distinguished as poetry, but I appreciated the simple, unsentimental examples of what makes up everyday life with a partner: “There is a kind of love called maintenance, / Which stores the WD40 and knows when to use it; // Which checks the insurance, and doesn’t forget / The milkman” (“Atlas”) and “I’m working on a meal you haven’t had to imagine, / A house cleaned to the rafters” (“Dear Valentine”). [Public library]

What I Loved, Siri Hustvedt

This 2003 novel could just as well have been titled “What I Lost,” which might be truer to its elegiac tone. Narrated by Professor Leo Hertzberg and set between the 1970s and 1990s, it’s about two New York City couples – academics and artists – and the losses they suffer over the years. With themes of modern art, perspective, memory, separation and varieties of mental illness, it asks to what extent we can ever know other people or use replacements to fill the gaps left by who and what is missing. Read it if you’ve enjoyed The Suicide of Claire Bishop by Carmiel Banasky, other books by Siri Hustvedt, or anything by Howard Norman. My favorite lines about love were “I often thought of our marriage as one long conversation” and “love thrives on a certain kind of distance … it requires an awed separateness to continue.” [Charity shop]

I didn’t realize this 1949 novel is a sequel to The Pursuit of Love, so it took a while to figure out who all the characters were. Fanny Logan is a cousin orbiting around Lord and Lady Montdore and their daughter Polly Hampton, all recently returned from some years in India. Fanny marries an Oxford don, while Polly shocks everyone by eloping with her uncle by marriage, “Boy” Dougdale, a recent widower once known as the “Lecherous Lecturer” for interfering with little girls. (This hint of pedophilia is carelessly tossed off in a way no writer would get away with today.) Meanwhile, the heir to the Hampton estate, an effeminate chap named Cedric, comes over from Canada for a visit and wins Lady Montdore over. This amusing picture of aristocratic life in the 1930s marvels at who we love and why. [Bookbarn International]

Interesting to consider this as a precursor to Saturday: both have a scientist as the protagonist and get progressively darker through a slightly contrived stalker plot. Enduring Love opens, famously, with a ballooning accident that leaves its witnesses questioning whether they couldn’t have done more to prevent it. Freelance science journalist Joe Rose – on a picnic with his partner, Keats scholar Clarissa, at the time – was one of those who rushed to help, as was Jed Parry, a young Christian zealot who fixates on Joe. He seems to think that by loving Joe, a committed atheist, he can bring him to God. In turn, Joe’s obsession with Jed’s harassment campaign drives Clarissa away. It’s a deliciously creepy read that contrasts rationality with religion and inquires into what types of love are built to last. [Charity shop] 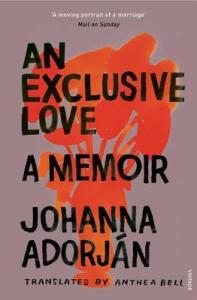 The author’s grandparents, Hungarian Holocaust survivors who moved to Denmark as refugees, committed suicide together on October 13, 1991. Her grandfather, an orthopedic surgeon who had been in an Austrian concentration camp, was terminally ill and his wife was determined not to live a day without him. This short, elegant memoir alternates Adorján’s imagined reconstruction of her grandparents’ last day with an account of their life together, drawn from family memories and interviews with those who knew them. She wonders whether, like Primo Levi and Arthur Koestler, theirs was a typically Jewish failure to fit in wherever they went, and/or a particularly Hungarian melancholy. “The answer is their great love,” the newspaper report of their death insisted. [Waterstones clearance]

Note: That striking cover is by Leanne Shapton.

And another nonfiction selection that I didn’t make it all the way through:

A Book about Love, Jonah Lehrer

(Abandoned at 31%.) Although I can see why he starts where he does, Lehrer’s early focus on attachment and attunement – two psychological theories of how babies learn to relate affectionately to others – means the book gets bogged down in studies performed on mice and/or children and feels more like a parenting book than anything else. (If that’s what you’re after, read All Joy and No Fun.) A glance at the table of contents suggests the rest of the book will go into marriage, divorce and how love changes over time, but I couldn’t be bothered to stick around. That said, Lehrer’s popular science writing is clear and engaging, and with the heartfelt mea culpa at the start of this book I couldn’t hold a grudge about his earlier plagiarism scandal. [Kindle book from NetGalley.]

No overtly heartwarming love stories in that selection, then, but are there any you fancy reading anyway? Have you read any “love” titles recently?