“Do you remember what that summer was like? – how much more beautiful than any since?”

These two slightly under-the-radar classics made for perfect heatwave reading over the past couple of weeks: very English and very much of the historical periods that they evoke, they are nostalgic works remembering one summer when everything changed – or could have. 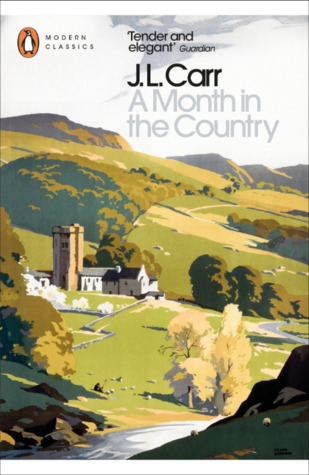 Summer 1920, North Yorkshire. Tom Birkin, a First World War veteran whose wife has left him, arrives in Oxgodby to uncover the local church’s wall painting of the Judgment Day, assumed to be the work of a medieval monk and long since whitewashed over. With nothing waiting for him back in London and no plans beyond this commission, he gives himself over to the daily rhythms of working, eating and sleeping – “There was so much time that marvelous summer.” This simple life is punctuated by occasional incidents like a Sunday school hayride and picnic, and filling in as a lay preacher at a nearby chapel. Also embarked on a quest into the past is Charles Moon, who is searching for the grave of their patroness’ ancestor in the churchyard. Moon, too, has a war history he’d rather forget.

Though it barely exceeds 100 pages, this novella is full of surprises – about Moon, about the presumed identity and fate of the centuries-dead figures he and Birkin come to be obsessed with, and about the emotional connection that builds between Birkin and Reverend Keach’s wife, Alice. “It is now or never; we must snatch at happiness as it flies,” Birkin declares, but did he take his own advice? There is something achingly gorgeous about this not-quite-love story, as evanescent as ideal summer days. Carr writes in a foreword that he intended to write “a rural idyll along the lines of Thomas Hardy’s Under the Greenwood Tree.” He indeed created something Hardyesque with this tragicomic rustic romance; I was also reminded of another very English classic I reviewed earlier in the year: Cider with Rosie by Laurie Lee.

A contemporary readalike: The Offing by Benjamin Myers

Summer 1900, Norfolk. Twelve-year-old Leo Colston is invited to spend the several July weeks leading up to his birthday at his school friend Marcus Maudsley’s home, Brandham Hall. Although the fatherless boy is keenly aware of the class difference between their families, in a year of learning to evade bullies he’s developed some confidence in his skills and pluck, fancying himself an amateur magician and gifted singer. Being useful makes him feel less like a charity case, so he eagerly agrees to act as “postman” for Marcus’s older sister, Marian, who exchanges frequent letters with their tenant farmer, Ted Burgess. Marian, engaged to Hugh, a viscount and injured Boer War veteran, insists the correspondence is purely business-related, but Leo suspects he’s abetting trysts the family would disapprove of.

Leo is right on the cusp of adolescence, a moment of transition that mirrors the crossing into a new century. As he glories in the summer’s mounting heat, “a liberating power with its own laws,” and mentally goads the weather into hitting ever greater extremes, he pushes against the limits of his innocence, begging Ted to tell him about “spooning” (that is, the facts of life). The heat becomes a character in its own right, gloweringly presiding over the emotional tension caused by secrets, spells and betrayals. And yet this is also a very funny novel: I loved Leo’s Franglais conversations with Marcus, and the confusion over mispronouncing “Hugh” as “you.” In places the tone even reminded me of Cold Comfort Farm.

Like A Month in the Country, this autobiographical story is an old man’s reminiscences, going back half a century in memory – but here Leo gets the chance to go back in person as well, seeing what has become of Brandham Hall and meeting one of the major players from that summer drama that branded him for life. I thought this masterfully done in every way: the class divide, the picture of childhood tipping over into the teenage years, the oppressive atmosphere, the comical touches. You know from the famous first line onwards (“The past is a foreign country: they do things differently there”) that this will juxtapose past and present – which, of course, has now become past and further past – in a powerful way, similar to Moon Tiger, my favorite fiction read of last year. I’ll be exploring more of Hartley’s work.

(Note: Although I am a firm advocate of DNFing if a book is not working for you, I would also like to put in a good word for trying a book again another time. Ironically, this had been a DNF for me last summer: I found the prologue, with all its talk of the zodiac, utterly dull. I had the same problem with Cold Comfort Farm, literally trying about three times to get through the prologue and failing. So, for both, I eventually let myself skip the prologue, read the whole novel, and then go back to the prologue. Worked a treat.)

Source: Ex-library copy bought from Lambeth Library when I worked in London