Book Serendipity, Mid-March to Early May 2021

In early April, the publisher Canongate ran a newsletter competition for one reader to win a stack of their recent releases. All you had to do was reply with your favourite word. On Twitter they gave a rundown of the most popular responses. Turning up several times each were petrichor, mellifluous, and oleaginous. Most frequent of all was serendipity: I was one of 15 to submit it! And one of those entries, but not mine, won. Anyway, fun little story there.

I call it Book Serendipity when two or more books that I read at the same time or in quick succession have something pretty bizarre in common. Because I have so many books on the go at once (usually 20‒30), I suppose I’m more prone to such incidents. I’ve realized that, of course, synchronicity is really the more apt word, but this branding has stuck. 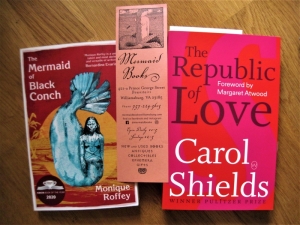