“[B]eing an adoptive parent is like parenting in Technicolor: everything is just a little more intense. This means the highs can be really high, but it also means that the lows are going to be really low. You have to prepare yourself.”

~Sharon Roszia, quoted in A Book about Love, by Jonah Lehrer

Two Voices, One Story is a mother–daughter memoir that splits narration duties between Elaine Rizzo and Amy Masters, the now-teenage daughter she adopted from China in 1999. Elaine’s sections provide the main thread of their story, while Amy’s passages, generally shorter and printed in italics, chime in to give her perspective on various events and relationships that have been important in her life. 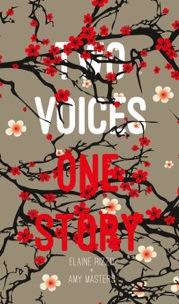 Elaine is forthright about her infertility and the miscarriage that led to her decision to adopt. In the late 1990s, China’s one-child policy was still in place, but it was the severe flooding of the Yangtze River that led directly to Amy’s adoption. Thousands died and millions more were displaced. Given the context, it’s not so surprising that baby Amy was left outside a welfare center. She was given the Chinese name Tong Fang – “Copper Child.”

For me the highlight of the book was Elaine and Lee’s trip to China to pick up Amy. Although they were nervous and disoriented, they experienced the kindness of strangers and responded with compassion of their own, taking along extra toiletries and clothes of different sizes and leaving the surplus with the care center. Amy had bronchitis, one more worry on top of all the paperwork and red tape they had to go through to finalize the adoption.

Back in England, Amy had some behavioral problems that were likely vestiges of her time at the orphanage. She hated noise, especially thunderstorms; she hit herself and others; and she often woke up screaming. Private schooling ensured she wouldn’t get left behind, and there were many happy times with extended family and holidays to Australia and the west coast of Wales, where Elaine and Amy would later settle with Elaine’s second husband.

But life wasn’t always rosy: Amy was strong-willed and uncooperative – perhaps nothing out of the ordinary for a teenager, but still a challenge for her parents. Elaine recalls a social worker telling them “that very often adoptive parents don’t feel like they have the right to tell their child off, or that they think they shouldn’t say or do anything which might upset the child, because they are trying to compensate for what has happened prior to the adoption.”

Lengthy commuting to her job back in England and years-long house renovations demanded much of Elaine’s attention, yet she remained alert to what was going on with Amy. Unfortunately, in her teen years Amy experienced racism from a few schoolmates, including abusive Facebook messages that drove the family to contact the police. Amy herself, though, always comes across as easygoing about being different: “Every Christmas we used to do a Nativity show and I remember being an angel first and then one of the kings, which I suppose was the right role for me because I really do come from the East.”

Even though this is a very quick read, my interest waxed and waned. The telling can be clichéd and sentimental, and I felt too much space was given to banal details that added little to an understanding of the central mother–daughter relationship. This self-published book has a very appealing cover but needs another look from an experienced editor who could fix the fairly frequent typos and punctuation issues and cut out the bullet points (nine pages’ worth) and speech tics like “I will also say…” and “I have to comment…”

I would certainly recommend this book to those who have a personal experience of or interest in adoption, particularly from overseas (for a fictional take on adoption from China, you might also try The Fortunes by Peter Ho Davies, The Red Thread by Ann Hood, and This Must Be the Place by Maggie O’Farrell), as well as to anyone wondering how to parent or educate a child who is in some way different.

I’ll end with some lovely words from Amy:

when my Chinese mum left me outside the gates of the welfare center almost eighteen years ago now, because there was nothing left for me in Tongling, she must have had the desperate hope that I would find a happy life with people who loved me. I can only say that her wish did come true.

Two Voices, One Story will be published by Clink Street Publishing on March 21st. Thanks to Rachel Gilbey of Authoright Marketing & Publicity for arranging my free copy for review.

I was pleased to participate in the blog tour for Two Voices, One Story.