Four February–March releases: A shape-shifting bereavement memoir; a poet’s selected works, infused with nature and history; a novel set among expatriates in Shanghai; and a graphic novel about a romance at the watershed of age 60 – you can’t say I don’t read a variety of books! I’m particularly pleased that two of these four are in translation. All:

When Death Takes Something from You Give It Back: Carl’s Book by Naja Marie Aidt

[Translated from the Danish by Denise Newman]

In March 2015 Aidt got a call telling her that her second of four sons, Carl Emil, was dead. The 25-year-old experienced drug-induced psychosis after taking some mushrooms that he and his friend had grown in their flat and, naked, jumped out of his fifth-floor Copenhagen window. In italicized sections she cycles back to the moment she was notified, each time adding on a few more harrowing details about Carl’s accident and the condition she found him in. The rest of the text is a collage of fragments: memories, dreams, dictionary definitions, journal entries, and quotations from the patron saints of bereavement (C.S. Lewis and Joan Didion) and poets who lost children, such as Stéphane Mallarmé.

The playful disregard for chronology and the variety of fonts, typefaces and sizes are a way of circumventing the feeling that grief has made words lose their meaning forever. David Grossman, whose son died during his service in the Israeli army, does a similar thing in Falling Out of Time, which, although it is fiction, blends poetry and dialogue in an attempt to voice the unspeakable. Han Kang’s The White Book and Yiyun Li’s Where Reasons End are two other comparable precursors.

With thanks to Quercus Books for the free copy for review.

I first encountered Alison Brackenbury’s poetry through her reading as part of the 2017 “Nature Matters” conference in Cambridge. From four generations of Lincolnshire shepherds, Brackenbury writes about history, nature, country life (especially horses, as you might guess from the title and cover) and everyday joys and regrets. A Collected/Selected Poems volume is often difficult to assess as a whole because there can be such a variety of style and content; while that is certainly true here in terms of the poems’ length and rhyme schemes, the tone and themes are broadly similar throughout. I connected most to her middle period. Her first and last lines are especially honed.

Highlights include “The Wood at Semmering” (“This is a dismal wood. We missed our train.”), “Half-day” (“Will she lift / Her face from cloth’s slow steam: will she find out / Ironing is duty; summer is a gift?”), “Hill Mist” (“I am too fond of mist, which is blind / without tenderness”), “On the Road” (the bravery of a roadkill squirrel), “Epigrams” (being in the sandwich generation), “The Card” (“Divorce comes close to death”), “Cycles” (“Would I go back?”), “The Jane Austen Reader” (“Welcome to the truth. Miss Bingley married Darcy”), “On the Aerial” (a starling’s many songs), and “Dickens: a daydream.”

A wee poem that’s perfect for this time of year. (I can see sparrows in a forsythia bush from my office window.)

“we are love’s strange seabirds. We dive there, still.” (from “The Divers’ Death”)

“Ancestors are not in our blood, but our heads: / we make history.” (from “Robert Brackenbury”)

With thanks to Carcanet Press for the free copy for review. 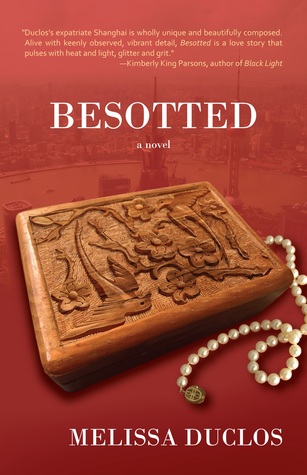 Sasha is soon to leave Shanghai, her departure hastened by the collapse of her relationship with Liz, whom she hired to work at her international school because she had no teaching experience or Chinese – and maybe because she signed her cover letter “Besottedly,” thinking it meant drunkenly. Even before Liz arrived, Sasha built romantic fantasies around her, thinking she’d show her the ropes and give her a spare room to live in. All went according to plan – the erstwhile straight Liz even ended up in Sasha’s bed – until it all fell apart.

The novel is set over one school year and shows the main characters exploring the expat community, which primarily involves going to happy hours. Liz starts language exchange sessions at Starbucks with a Chinese guy, Sam, and both women try to ignore the unwanted advances of their acquaintance Dorian, an architect. Little misunderstandings and betrayals go a long way towards rearranging these relationships, while delicate flashbacks fill in the women’s lives before China.

There were a couple of narrative decisions here that didn’t entirely work for me: Sasha narrates the whole book, even scenes she isn’t present for; and there is persistent personification of abstractions like Loneliness and Love. But the descriptions of the city and of expat life are terrific, and the wistful picture of a romance that starts off sweet but soon sours is convincing.

“Shanghai had found its own identity since then: a glittering capitalist heart, hardened into a diamond and barely hidden beneath its drab, brown communist cloak. … Constantly under construction, Shanghai was a place to reinvent yourself.”

Full disclosure: Melissa and I worked together on Bookkaholic web magazine, and are Facebook friends. She sent me a free proof copy for review.

Blossoms in Autumn by Zidrou and Aimée de Jongh

[Translated from the French by Matt Madden]

The French-language title, translated literally, is The Programmed Obsolescence of Our Feelings. (Talk about highfalutin!) Both that and the English title defy the notion that we become less capable of true love and growth the older we are – as will be dramatized through the story of a later-life romance between the two main characters. Ulysses Varennes, a 59-year-old widower who retired early from his career as a mover, hates books (gasp!) because moving boxes of them ruined his back (he even refuses to read them!). Mediterranea Solenza, coming up on 62, was a nude model in her prime and is now a cheesemaker. At the book’s opening she has just laid her mother to rest, and her affair with Ulysses serves as a chance at a new life that somehow counterbalances the loss.

We come to understand these characters through the sadness of their past but also through their hopeful future, both encompassed by the metaphor of a Homeric journey (Ulysses, get it?). Indeed, the book takes an unusual turn I never would have expected; if it beggars belief, it is at least touching. Zidrou is a Belgian comics writer and Aimée de Jongh is a Dutch-born illustrator. She portrays these ageing bodies sensitively but realistically, retreating into an appropriately impressionistic style for the spreads that show their actual lovemaking. In a nice touch, the first two words and last two words of the book are exactly the same.