I’ve been writing for U.S. print magazine Bookmarks for an astonishing 9.5 years now, and have the title of associate editor. The upcoming November/December issue is their first to be released in digital format as well, and as a promo it’s available to read for free here. My contributions to the issue are an article on fiction and nonfiction about women in STEM (starts on p. 23), and various of the anonymous synopses/critical summaries in the New Books Guide. Each issue has one or more author profiles, one or more thematic features, reader recommendations, a book group bio, and news on prizes and upcoming releases.

Here are excerpts from a few recent or upcoming reviews of October releases that I’ve contributed elsewhere. I link to the full text where available.

Without Saints: Essays by Christopher Locke: Fifteen flash essays present shards of a life story. Growing up in New Hampshire, Locke encountered abusive schoolteachers and Pentecostal church elders who attributed his stuttering to demon possession and performed an exorcism. By age 16, small acts of rebellion had ceded to self-harm, and his addictions persisted into adulthood. Later, teaching poetry to prisoners, he realized that he might have been in their situation had he been caught with drugs. The complexity of the essays advances alongside the chronology. Weakness of body and will is a recurrent element.

Demon Copperhead by Barbara Kingsolver: Her bighearted ninth novel follows the contours of Charles Dickens’s David Copperfield, transplanting the plot to 1990s southwest Virginia to uncover the perils of opiate addiction. Ten-year-old Damon Fields lives in a trailer home with his addict mother, who is employed at Walmart, and his new stepfather, Stoner, a mean trucker. Tragedy strikes and Damon moves between several foster homes before running away. “A kid is a terrible thing to be, in charge of nothing,” he remarks, looking back. His irrepressible, sassy voice is reminiscent of Holden Caulfield’s in this Appalachian cousin to Shuggie Bain.

Bad Vibes Only by Nora McInerny: McInerny’s fifth book is a witty, insightful set of essays about self-worth and parenting in the social media era. Those familiar with the author’s previous autobiographical works will remember that within a few weeks in 2014, her father and first husband, Aaron, both died of cancer. After several years as a single mother, she married Matthew and they blended their families. Even when dealing with serious topics like anxiety and narrow escapes, McInerny has a light touch. She is endearingly honest, aware of her privilege and open about her contradictions. The then-and-now focus compares pre-Internet childhood with the challenges of raising kids with a constant online presence.

Which Side Are You On by Ryan Lee Wong: In Wong’s dynamite debut novel – set in Los Angeles, with its history of race riots – an Asian American college student committed to social justice rethinks how best to live out his ideals in the real world. Wong probes the generational gap between Reed and his parents through snappy dialogue and enjoyable scenes that constitute an incidental tour of multi-ethnic L.A. Full of vibrant characters, this punchy story offers no simple answers to ongoing racial conflicts. The portrait of a sanctimonious young man who wakes up to the reality of generational trauma and well-meaning failure is spot-on. Truly, a book for the contemporary moment.

It’s always a thrill to see my words quoted as authoritative: excerpts from my Bad Vibes Only review appear on Bookshop.org and on Lit Hub’s Bookmarks page (see below), and there’s an unattributed quote from my Which Side Are You On review on the book’s Amazon page. 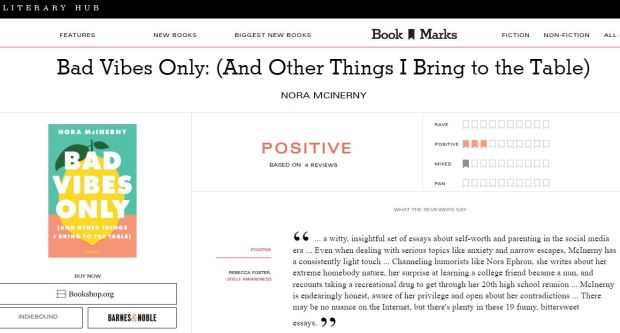 Do any of these books interest you?