Septembers are for making a bit of an effort to read short story collections, which otherwise tend to sit on my shelves unread. I reviewed three collections earlier in the month, and have gotten through another five since then.

Let’s start with the good stuff.

The Thing Around Your Neck by Chimamanda Ngozi Adichie (2009)

My third by Adichie this year, and an ideal follow-up to Half of a Yellow Sun and Americanah because it reworks or anticipates themes and settings from both novels. For instance, the former was in my mind while reading “Ghosts,” in which a retired mathematics professor meets an old colleague he assumed had died during the Biafran War. “Cell One” and “A Private Experience” picture a Nigeria rife with violence and rioting. The missing are presumed dead and the imprisoned are in danger of being ‘disappeared’. I was reminded of Americanah while reading “Imitation” and “On Monday of Last Week,” in which Nigerian women in Philadelphia tire of submission to their husbands and make their own life changes.

Characters hope to win the visa lottery to the USA, adjust to an arranged marriage, fret over a plane crash back home, or dare to speak out about mistreatment of women. African-American women’s freedom is attractive by comparison. The final story, “The Headstrong Historian,” has the most expansive sense of time: it opens in what feels like an ancient tribal setting – before the next generation attended Anglican mission school. A third-generation character rescues her family’s story, reclaiming her African heritage while taking advantage of Western education. I was especially charmed by two stories in the second person, including the title story, which refers not to a necklace but to a burden of depression. There’s not a dud among the dozen here. Adichie has won me as a loyal fan. [From free bookshop]

“Why do people travel? … I suppose to lose part of themselves. Parts which trap us. Or maybe because it is possible, and it helps us believe there is a future.”

These sixteen stories, split fairly evenly between first- and third-person perspectives, focus on women’s lives after. After a breakup, a death, an affair, a miscarriage or sexual abuse, they have to assimilate the trauma and reevaluate life. Most of the characters are based in England or Ireland, but other places are frequent points of reference: a beach holiday in Turkey in “Grievous Bodily Harm,” memories of life in Tokyo in “Araiyakushimae,” and wanderings around the USA in “Lost Children.” This gives the collection a wide scope, while the overall air of melancholy lends tonal consistency.

There are no speech marks, so dialogue flows naturally into exposition. The similarity of the protagonists and the delicate writing threatened to make the stories blend into one in my mind, but one per sitting made a perfect dose. A few standouts: in “Foraged Things,” Lia meets a man searching for mushrooms in the wood; in “Breakfast with Rilke,” hitchhikers look for love and adventure in continental Europe; and in “The Stars Are Light Enough,” a substitute teaching King Lear is alarmed when a problem student goes missing.

My thanks to Splice for the free copy for review.

But these next three, alas, were pretty lackluster reads for me. All:

Your Duck Is My Duck by Deborah Eisenberg (2018)

Who could resist such a title and cover?! Unfortunately, I didn’t warm to Eisenberg’s writing and got little out of these stories, especially “Merge,” the longest and only one of the six that hadn’t previously appeared in print. The title implies collective responsibility and is applied to a story of artists on a retreat in Europe. “The Third Tower” has a mental hospital setting. In “Recalculating,” a character only learns about an estranged uncle after his death. The two I liked most were “Taj Mahal,” about competing views of a filmmaker from the golden days of Hollywood, and “Cross Off and Move On,” about a family’s Holocaust history. But all are very murky in my head. (See Susan’s more positive review.) [Free from a neighbor]

Learning to Talk by Hilary Mantel (2003)

Last year I loved reading Mantel’s collection The Assassination of Margaret Thatcher. In comparison, these six first-person stories felt like autobiographical castoffs. (They were individually published in various periodicals between 1987 and 2002 and then collected as a follow-up to her memoir, Giving Up the Ghost, an excerpt from which closes this book.) We get a child’s perspective on village life in the North of England with a lodger, a stepfather and a mean dog. My two favorites were the title story, about taking elocution lessons, and “Third Floor Rising,” about an 18-year-old’s first job in a department store. [Public library] 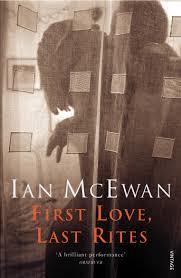 There’s a nastiness to these early McEwan stories that reminded me of Never Mind by Edward St. Aubyn. The teenage narrator of “Homemade” tells you right in the first paragraph that his will be a tale of incest. A little girl’s body is found in the canal in “Butterflies.” The voice in “Conversation with a Cupboard Man” is that of someone who has retreated into solitude after being treated cruelly at the workplace (“I hate going outside. I prefer it in my cupboard”). “Last Day of Summer” seems like a lovely story about a lodger being accepted as a member of the family … until the horrific last page. Only “Cocker at the Theatre” was pure comedy, of the raunchy variety (emphasis on “cock”). You get the sense of a talented writer whose mind you really wouldn’t want to spend time in; had this been my first exposure to McEwan, I would probably never have opened up another of his books. [Public library]

I’m still much more likely to gravitate towards novels rather than short stories because I find story collections so hit and miss; rarely do I find one that I enjoy all the way through.