Today I have a biography-cum-cultural history of America’s wild foods and a novel about beekeeping and mental illness.

Twain’s Feast: Searching for America’s Lost Foods in the Footsteps of Samuel Clemens by Andrew Beahrs (2010) 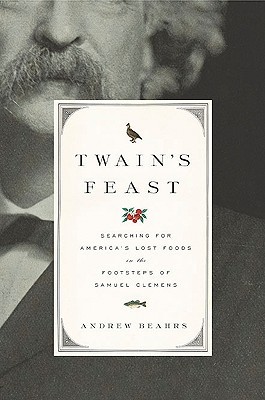 (20 Books of Summer, #15) In 1879, Mark Twain, partway through the Grand Tour immortalized in A Tramp Abroad, was sick of bland, poor-quality European food and hankering for down-home American cooking. He drew up a list of 80 foodstuffs he couldn’t wait to get back to: everything from soft-shell crabs to proper ice water. “The menu shouts of a joyous abundance,” Beahrs writes. “It testifies to a deep bond in Twain’s mind between eating and tasting and celebrating … rooted food that would live forever in his memory.”

Beahrs goes in search of some of those trademark dishes and explores their changes in production over the last 150 years. In some cases, the creatures and their habitats are so endangered that we don’t eat them anymore, like Illinois’ prairie chickens and Maryland’s terrapins, but he has experts show him where remnant populations live. In San Francisco Bay, he helps construct an artificial oyster reef. He meets cranberry farmers in Massachusetts and maple tree tappers in Vermont. At the Louisiana Foodservice EXPO he gorges on “fried oysters and fried shrimp and fries. I haven’t had much green, but I’ve had pecan waffles with bacon, and I’ve inserted beignets and café au lait between meals with the regularity of an Old Testament prophet chanting ‘begat.’”

But my favorite chapter was about attending a Coon Supper in Arkansas, a local tradition that has been in existence since the 1930s. Raccoons are hunted, butchered, steamed in enormous kettles, and smoked before the annual fundraising meal attended by 1000 people. Raccoon meat is greasy and its flavor sounds like an acquired taste: “a smell like nothing I’ve smelled before but which I’ll now recognize until I die (not, I hope, as a result of eating raccoon).” Beahrs has an entertaining style and inserts interesting snippets from Twain’s life story, as well as recipes from 19th-century cookbooks. There are lots of books out there about the country’s increasingly rare wild foods, but the Twain connection is novel, if niche.

The Honey Thief by Elizabeth Graver (1999)

(20 Books of Summer, #16) Ever since I read The End of the Point (which featured in one of my Six Degrees posts), I’ve meant to try more by Graver. This was her second novel, a mother-and-daughter story that unearths the effects of mental illness on a family. Eleven-year-old Eva has developed a bad habit of shoplifting, so her mother Miriam moves them out from New York City to an upstate farmhouse for the summer. But in no time Eva, slipping away from her elderly babysitter’s supervision and riding her bike into the countryside, is stealing jars of honey from a roadside stand. She keeps going back and strikes up a friendship with the middle-aged beekeeper, Burl, whom she seems to see as a replacement for her father, Francis, who died of a heart attack when she was six.

Alternating chapters look back at how Miriam met Francis and how she gradually became aware of his bipolar disorder. This strand seems to be used to prop up Miriam’s worries about Eva (since bipolar has a genetic element); while it feels true to the experience of mental illness, it’s fairly depressing. Meanwhile, Burl doesn’t become much of a presence in his own right, so he and the beekeeping feel incidental, maybe only included because Graver kept/keeps bees herself. Although Eva is an appealingly plucky character, I’d recommend any number of bee-themed novels, such as The Secret Life of Bees by Sue Monk Kidd, The History of Bees by Maja Lunde, and even Generation A by Douglas Coupland, over this one.