A Hundred Million Years and a Day by Jean-Baptiste Andrea

Stanislas Armengol remembers finding his first trilobite at the age of six. His fossils and his dog were his best friends during a lonely childhood dominated by a violent father nicknamed “The Commander.” Now, in the summer of 1954, Stan is a 52-year-old paleontologist embarking on the greatest project of his career. He sold his apartment in Paris to finance this expedition to the French/Italian Alps in search of a “dragon” (perhaps a diplodocus) said to be buried in a glacier between three mountain peaks.

“A scientist does not unquestioningly swallow a tall tale without demanding some proof, some concrete detail,” Stan insists. “Doubt is our religion.” But he’s seen a promising bone fragment from the region, and his excitement soon outweighs his uncertainty. This is his chance to finally make a name for himself. Arriving from Turin to join Stan are his friend and former assistant Umberto, and Umberto’s assistant, Peter. Gio, a local, will be their guide. It’s a tough climb requiring ropes and harnesses. As autumn approaches, and then winter, the hunt for the fossil becomes more frantic. The others are prepared to come back next year if it’s no longer sensible to continue, but Stan has staked everything on the venture and won’t quit.

Stan’s obsession puts him in touch with deep time – he’s “someone whose profession forces him to think in terms of millions of years” – but his thoughts keep returning to moments of joy or distress from his childhood. Although she died when he was nine years old, his beloved mother still looms large in his memory. Even as the realities of cold and hunger intensify, his past comes to seem more vivid than his present.

This French bestseller was shortlisted for the Grand Prix de l’Académie Française last year. Sam Taylor’s translation is flawless, as always (I only noted one tiny phrase that felt wrong for the time period – “honestly, what a brat” – though for all I know it’s off in the original, too). However, I found the novella uncannily similar to Snow, Dog, Foot by Claudio Morandini, which is about a hermit in the Italian Alps whose mental illness is exacerbated by snowy solitude. I found Morandini’s witty, macabre story more memorable. Although A Hundred Million Years and a Day is well constructed, there’s something austere about it that meant my admiration never quite moved into fondness.

A Hundred Million Years and a Day will be published in the UK tomorrow, the 11th. My thanks to Gallic Books for the free copy for review.

I was delighted to be invited to participate in the blog tour. See below for details of where other reviews and features have appeared or will be appearing soon. 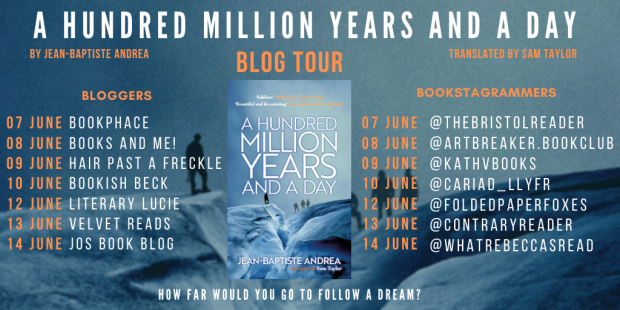