Polio and the Plague: Epidemics in Fiction

Back in January I had the idea to catch up as much as I can on previous Wellcome Book Prize long- and shortlists while the Prize is on hiatus. I decided to start with a pair of novels about polio from my public library system: The Golden Age by Joan London and Nemesis by Philip Roth. The latter, especially, has taken on new significance due to its evocation of a time of panic over a public health crisis (see this article, but beware spoilers). On a fellow book reviewer’s recommendation, I also took Year of Wonders by Geraldine Brooks off the shelf and read it at the same time as the Roth. 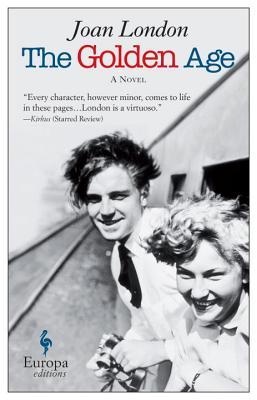 The Golden Age was a real children’s polio hospital in Western Australia, but London has peopled it with her own fictional cast. In 1953–4, Frank Gold and Elsa Briggs, polio patients aged 12 going on 13, fall in love in the most improbable of circumstances: “The backs of their hands brushed as they walked side by side on their crutches. Their bloodstreams recharged by exercise and fresh air, they experienced a fiery burst of pleasure.”

Frank is much the more vibrant character thanks to his family’s wartime past in Hungary and his budding vocation as a poet, which was spurred on by his friendship with Sullivan, a fellow inmate at his previous rehabilitation center. The narrative spends time with the nurses, parents and other patients but keeps coming back to Frank and Elsa. However, Chapter 7, with Frank and his mother Ida still back in Budapest, was my favorite.

I was reminded of Tracy Farr’s work (The Life and Loves of Lena Gaunt), especially the look back from decades later. This has a strong premise and some great lines, but for me there was something slightly lacking in the execution.

Polio is like love, Frank says … Years later, when you think you have recovered, it comes back.

[On the Wellcome Book Prize 2011 shortlist]

In the summer of 1944 Newark, New Jersey is hit hard by polio. As a local playground director, 23-year-old Bucky Cantor is distressed when several of his charges become ill; a couple of them even die within a matter of days.

At first Bucky, whose poor eyesight kept him out of the War, sees his job as his own field of duty, but gradually fear and helplessness drive him away. He escapes to the Pocono Mountains to join his fiancée, Marcia, as a summer camp counselor, but soon realizes the futility of trying to outrun a virus. Unable to accept the randomness of bad luck, he blames God – and himself – for the epidemic’s spread.

Despite our better general understanding of epidemiology today, there were still many passages in this novel that rang true for me as they picture life proceeding as normal until paranoia starts to take hold:

Despite polio’s striking in the neighborhood, the store-lined main street was full of people out doing their Saturday grocery shopping…

The important thing, he said, was always to wash your hands after you handled paper money or coins. What about the mail, someone else said … What are you going to do, somebody retorted, suspend delivering the mail? The whole city would come to a halt. Six or seven weeks ago they would have been talking about the war news.

Roth really captures the atmosphere of alarm and confusion, but doesn’t always convey historical and medical information naturally, sometimes resorting to paragraphs of context and representative conversations like in the last quote above. I also wasn’t sure about the use of a minor character (revealed on page 108 to be one of Bucky’s playground kids and a polio patient) as the narrator. This seemed to me to make Bucky more of a symbolic hero than a genuine character. Still, this was a timely and riveting read. 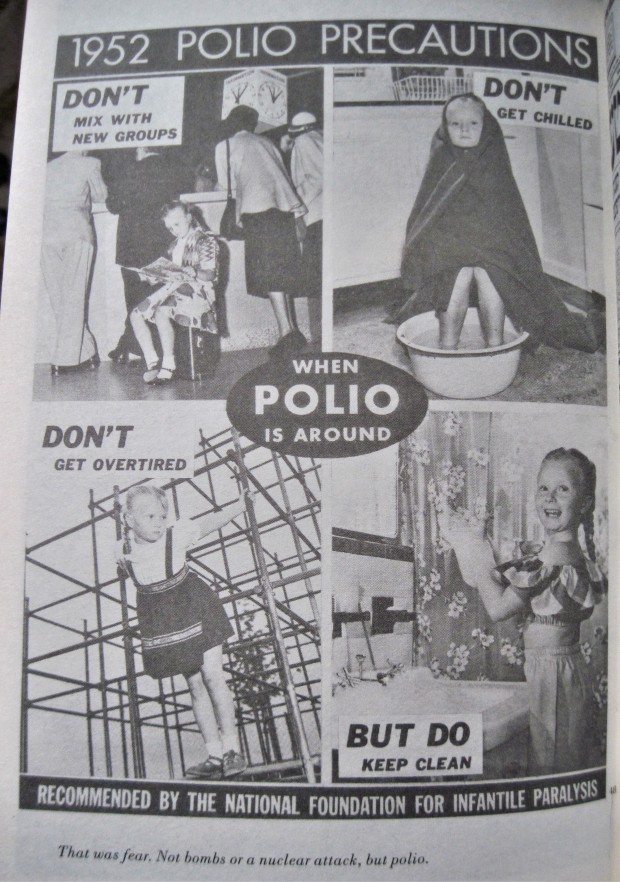 A period warning about polio reprinted at the back of Paul Auster’s Report from the Interior.

Year of Wonders by Geraldine Brooks (2001)

In 1665, with the Derbyshire village of Eyam in the grip of the Plague, the drastic decision was made to quarantine it. A benevolent landowner arranged for regular deliveries of food and other supplies to just outside the parish boundaries. The villagers made an oath that no one would leave until the pestilence was eradicated. One year later, two-thirds of its residents were dead. Brooks imagines that the “plague seeds” came to the village in a bolt of cloth that was delivered from London to the tailor George Viccars, who lodged with widow Anna Frith. Viccars is the first victim and the disease quickly spreads outward from Anna’s home.

Anna barely has time to grieve her own losses before she’s called into service: along with the minister’s wife, Elinor Mompellion, she steps in as a midwife, herbal healer and even a miner. The village succumbs to several sobering trajectories. Suspicion of women’s traditional wisdom leads some to take vigilante action against presumed witches. Unscrupulous characters like Anna’s father, who sets up as a gravedigger, try to make a profit out of others’ suffering. Frustration with the minister’s apparent ineffectuality attracts others to forms of religious extremism. Like Bucky, people cannot help but see the hand of God here.

Perhaps what I was most missing in the London and Roth novels (and in Hamnet, which bears such striking thematic similarities to Year of Wonders) was intimate first-person narration, which is just what you get here from Anna. The voice and the historical recreation are flawless, and again there were so many passages that felt apt:

(once they start meeting for church in a meadow) We placed ourselves so that some three yards separated each family group, believing this to be sufficient distance to avoid the passing of infection.

Yet it is a good day, for the simple fact that no one died upon it. We are brought to a sorry state, that we measure what is good by such a shortened yardstick.

I’ve docked a half-star only because of a far-fetched ending that reminded me of that to The Wonder by Emma Donoghue. Apart from that, this is just what I want from my historical fiction.

Are you doing any reading about epidemics?