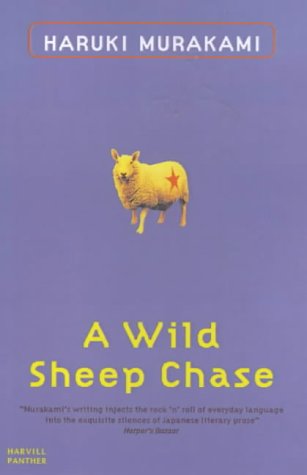 I was utterly entranced by my first two Haruki Murakami novels, The Wind-Up Bird Chronicle and Kafka on the Shore; both are so richly layered, dreamlike and bizarre. For Japanese Literature Challenge 13, run by Meredith of Dolce Belezza, I decided to pick up another of his books. First I tried Norwegian Wood, but, ironically, it was so normal (from the little I read, a standard, nostalgic coming-of-age novel set on a college campus) that I felt disoriented and set it down after 20 pages – I’ll keep it on the shelf for some other time. Instead I read A Wild Sheep Chase, a fairly short one for Murakami at just under 300 pages.

I loved the zany premise: the unnamed narrator, who works for a small advertising firm, gets a threatening visit one day. A PR bulletin his company created happens to feature a photo his friend The Rat sent him of a traditional Hokkaido landscape with sheep, among which is visible one particular sheep – “the third sheep from the right in the front row” – with a distinctive brown star-shaped birthmark. “The Boss” and his emissary give the narrator an ultimatum: he has two months to find this sheep, or he’ll be driven out of business.

So, along with his girlfriend, who has psychic powers and unbelievably seductive ears, he sets off by train in search of typical mountains-and-fields scenery. She chooses, seemingly at random, a hotel that turns out to be the former headquarters of the Hokkaido Ovine Association; its owner’s father, who lives like a hermit upstairs, is the Sheep Professor. Not just an expert on sheep, he believes he was at one time possessed by the star-marked sheep.

As the narrator makes his way to The Rat’s mountain hideaway, an hour and a half from the nearest town, he’s moving further from rational explanations and deeper into solitude and communion with ghosts. There’s some trademark Murakami strangeness, but the book is too short to give free rein to the magic realist plot, and I felt like there were too many loose ends after his return from The Rat’s, especially around his girlfriend’s disappearance.

Also, after just three and a bit of his novels (I DNFed Killing Commendatore in 2018), I’m already noticing a lazy reliance on the same setup: a directionless thirtysomething man whose marriage has recently fallen apart starts a new and pretty peculiar life. There are also a couple of specific failings that I’m noticing for the second or third time now: a slow, pointless start (the first 40 pages here could easily be shaved off) and slight misogyny: “Women with their clothes off have a frightening similarity. Always throws me for a loop.”

I appreciate the imagination that went into this, and enjoyed some specific witty metaphors (“the effect was unpalatable. Like serving sherbet and broccoli on the same silver platter” and “The elevator shook like a large dog with lung disease”) and observant lines (“Age certainly hasn’t conferred any smarts on me. Character maybe, but mediocrity is a constant”), but overall the novel was a letdown. Can anyone recommend me another surefire Murakami?

Note: This was Murakami’s first novel to be translated into English, in 1989. I had no idea that it’s actually the third book out of four in a series called “The Rat.”