Much as I’d like to review books in advance of their release dates, that doesn’t seem to be how things are going this year. I hope readers will find it useful to learn about recent releases they might have missed. This month I’m featuring a post-plane crash scenario, a reflection on modern anxieties, an essay about the human–birds relationship, and a meditation on graveyards.

(Published by Penguin/Viking on the 20th; came out in USA from Dial Press last month) 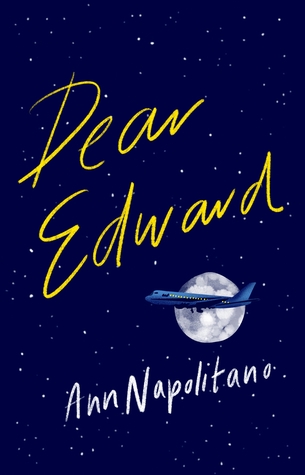 June 2013: a plane leaves Newark Airport for Los Angeles, carrying 192 passengers. Five hours after takeoff, it crashes in the flatlands of northern Colorado, a victim to stormy weather and pilot error. Only 12-year-old Edward Adler is found alive in the wreckage. In alternating storylines, Napolitano follows a select set of passengers (the relocating Adler family, an ailing tycoon, a Wall Street playboy, an Afghanistan veteran, a Filipina clairvoyant, a pregnant woman visiting her boyfriend) in their final hours, probing their backstories to give their soon-to-end lives context (and meaning?), and traces the first six years of the crash’s aftermath for Edward.

While this is an expansive and compassionate novel that takes seriously the effects of trauma and the difficulty of accepting random suffering, I found that I dreaded returning to the plane every other chapter – I have to take regular long-haul flights to see my family, and while I don’t fear flying, I also don’t need anything that elicits catastrophist thinking. I would read something else by Napolitano (she’s written a novel about Flannery O’Connor, for instance), but I can’t imagine ever wanting to open this up again.

I picked up a proof copy at a Penguin Influencers event. 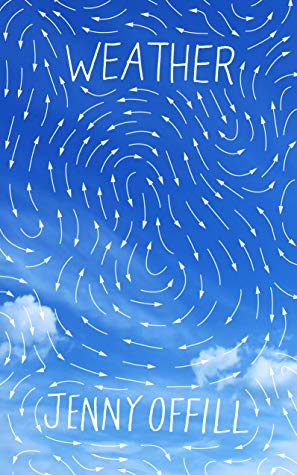 Could there be a more perfect book for 2020? A blunt, unromanticized but wickedly funny novel about how eco-anxiety permeates everyday life, Weather is written in the same aphoristic style as Offill’s Dept. of Speculation but has a more substantial story to tell. Lizzie Benson is married with a young son and works in a New York City university library. She takes on an informal second job as PA to Sylvia, her former professor, who runs a podcast on environmental issues and travels to speaking engagements.

Set either side of Trump’s election, the novel amplifies many voices prophesying doom, from environmentalists to Bible-thumpers (like Lizzie’s mother) to those who aren’t sure they’ll even make it past tomorrow (like her brother, a highly unstable ex-addict who’s having a baby with his girlfriend). It’s a wonder it doesn’t end up feeling depressing. Lizzie’s sardonic narration is an ideal way of capturing relatable feelings of anger and helplessness, cringing fear and desperate hope. Don’t expect to come away with your worries soothed, though there is some comfort to be found in the feeling that we’re all in this together.

“Once sadness was considered one of the deadly sins, but this was later changed to sloth. (Two strikes then.)”

“My husband is reading the Stoics before breakfast. That can’t be good, can it?”

I read an e-ARC via Edelweiss.

An Indifference of Birds by Richard Smyth

(Published by Uniformbooks on the 14th) 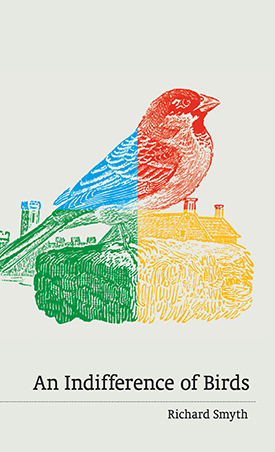 Birds have witnessed the whole of human history, sometimes profiting from our behavior – our waste products provide them with food, our buildings can be handy nesting and hunting platforms, and our unintentional wastelands and demilitarized zones turn into nature reserves – but more often suffering incidental damage. That’s not even considering our misguided species introductions and the extinctions we’ve precipitated. Eighty percent of bird species are now endangered. For as minimal as the human fossil record will be, we have a lot to answer for.

From past to future, archaeology to reintroduction and de-extinction projects, this is a wide-ranging essay that still comes in at under 100 pages. It’s a valuable shift in perspective from human-centric to bird’s-eye view. The prose is not at all what I’ve come to expect from nature writing (earnest, deliberately lyrical); it’s more rhetorical and inventive, a bit arch but still passionate – David Foster Wallace meets Virginia Woolf? The last six paragraphs, especially, soar into sublimity. A niche book, but definitely recommended for bird-lovers.

“They must see us, watch us, from the same calculating perspective as they did two million years ago. We’re still galumphing heavy-footed through the edgelands, causing havoc, small life scattering wherever we tread.”

“Wild things lease these places from a capricious landlord. They’re yours, we say, until we need them back.”

I pre-ordered my copy directly from the publisher.

These Silent Mansions: A life in graveyards by Jean Sprackland

(Published by Jonathan Cape on the 6th) 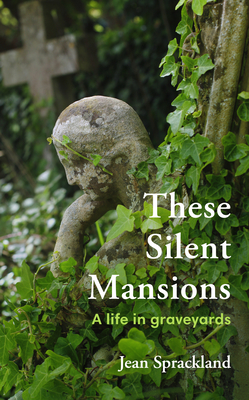 I’m a big fan of Sprackland’s beachcombing memoir, Strands, and have also read some of her poetry. Familiarity with her previous work plus a love for graveyards induced me to request a copy of her new book. In it she returns to the towns and cities she has known, wanders through their graveyards, and researches and imagines her way into the stories of the dead. For instance, she finds the secret burial place of persecuted Catholics in Lancashire, learns about a wrecked slave ship in a Devon cove, and laments two dead children whose bodies were sold for dissections in 1890s Oxford. She also remarks on the shifts in her own life, including the fact that she now attends more funerals than weddings, and the displacement involved in cremation – there is no site she can visit to commune with her late mother.

I most enjoyed the book’s general observations: granite is the most prized headstone material, most graves go unvisited after 15 years, and a third of Britons believe in angels despite the country’s overall decline in religious belief. I also liked Sprackland’s list of graveyard charms she has seen. While I applaud any book that aims to get people thinking and talking about death, I got rather lost in the historical particulars of this one.

“This is the paradox at the heart of our human efforts to remember and memorialise: the wish to last forever, and the knowledge that we are doomed to fail.”

“Life, under such a conscious effort of remembering, sometimes resembles a series of clumsy jump-cuts rather than one continuous narrative.”

My thanks to the publisher for the free copy for review.

What recent releases can you recommend?