Paul Auster Reading Week continues! Be sure to check out Annabel’s excellent post on why you should try Auster. On Monday I reviewed Winter Journal and the New York Trilogy. Adding in last year’s review of Timbuktu, I’ve now read six of Auster’s books and skimmed another one (the sequel to Winter Journal). It’s been great to have this project as an excuse to get more familiar with his work and start to recognize some of the recurring tropes.

This reminded me most of The Locked Room, the final volume of the New York Trilogy. There’s even a literal locked room in a book within the book by the narrator, a writer named Sidney Orr. It’s 1982 and Orr is convalescing from a sudden, life-threatening illness. At a stationer’s shop, he buys a fine blue notebook from Portugal, hoping its beauty will inspire him to resume his long-neglected work. When he and his wife Grace go to visit John Trause, Grace’s lifelong family friend and a fellow novelist, Orr learns that Trause uses the same notebooks. Only the blue ones, mind you. No other color fosters the same almost magical creativity. 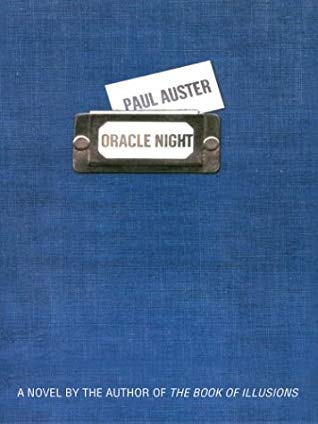 For long stretches of the novel, Orr is lost in his notebook (“I was there, fully engaged in what was happening, and at the same time I wasn’t there—for the there wasn’t an authentic there anymore”), writing in short, obsessive bursts. In one project, a mystery inspired by an incident from The Maltese Falcon, Nick Bowen, a New York City editor, has a manuscript called Oracle Night land on his desk. Spooked by a near-death experience, he flees to Kansas City, where he gets a job working on a cabdriver’s phone book archive, “The Bureau of Historical Preservation,” which includes a collection from the Warsaw ghetto. But then he gets trapped in the man’s underground bunker … and Orr has writer’s block, so leaves him there. Even though it’s fiction (within fiction), I still found that unspeakably creepy.

In the real world, Orr’s life accumulates all sorts of complications over just nine September days. Some of them are to do with Grace and her relationship with Trause’s family; some of them concern his work. There’s a sense in which what he writes is prescient. “Maybe that’s what writing is all about, Sid,” Trause suggests. “Not recording events from the past, but making things happen in the future.” The novel has the noir air I’ve come to expect from Auster, while the layering of stories and the hints of the unexplained reminded me of Italo Calvino and Haruki Murakami. I even caught a whiff of What I Loved, the novel Auster’s wife Siri Hustvedt published the same year. (It wouldn’t be the first time I’ve spotted similar themes in husband‒wife duos’ work – cf. Jonathan Safran Foer and Nicole Krauss; Zadie Smith and Nick Laird.)

This is a carefully constructed and satisfying novel, and the works within the work are so absorbing that you as the reader get almost as lost in them as Orr himself does. I’d rank this at the top of the Auster fiction I’ve read so far, followed closely by City of Glass.

This sequel to Winter Journal came out a year later. Again, the autobiographical rendering features second-person narration and a fragmentary style. I had a ‘been there, done that’ feeling about the book and only gave it a quick skim. It might be one to try another time. 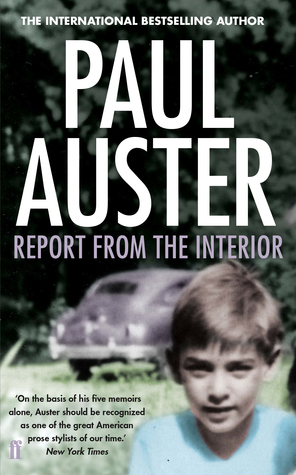 In the first 100-page section Auster highlights key moments from the inner life of a child. For instance, he remembers that the epiphany that a writer can inhabit another mind came while reading Robert Louis Stevenson’s poetry, and he emulated RLS in his own first poetic attempts. The history and pop culture of the 1950s, understanding that he was Jewish, and reaping the creative rewards of boredom are other themes. I especially liked a final anecdote about smashing his seventh-grade teacher’s reading challenge and being driven to tears when the man disbelieved that he’d read so many books and accused him of cheating.

Other sections give long commentary on two films (something he also does in Winter Journal with 10 pages on the 1950 film D.O.A.), select from letters he wrote to his first wife in the late 1960s while living in Paris, and collect an album of black-and-white period images such as ads, film stills and newspaper photographs. There’s a strong nostalgia element, such that the memoir would appeal to Auster’s contemporaries and those interested in learning about growing up in the 1950s.

Ultimately, though, this feels unnecessary after Winter Journal. Auster repeats a circular aphorism he wrote at age 20: “The world is in my head. My body is in the world. You will stand by that paradox, which was an attempt to capture the strange doubleness of being alive, the inexorable union of inner and outer”. But I’m not sure that body and mind can be so tidily separated as these two works posit. I got more of an overall sense of Auster’s character from the previous book, even though it was ostensibly focused on his physical existence.

The library at the university where my husband works holds another four Auster novels, but I’ll wait until next year to dive back into his work. After reading other people’s reviews, I’m now most keen to try The Brooklyn Follies, Invisible and In the Country of Last Things.

Have you tried anything by Paul Auster this week?