Through a giveaway on Eric’s blog, I won tickets to see Bernardine Evaristo and Jennifer Nansubuga Makumbi speak about their latest books at the London Literature Festival (this year’s theme: “Once Upon Our Times”) at the Southbank Centre yesterday. It was great to meet up with fellow bloggers Eric and Eleanor to hear these two black women writers read from their recent work and discuss feminism, the political landscape for writers of African descent, and their experiments with form.

Frustrated by the lack of black women in British literature, Evaristo started writing Girl, Woman, Other in 2013. She began with Carole (Anglo-Nigerian, like herself), who has to change to fit in, first at Oxford and then as a City banker. Next she moved on to the stories of Carole’s mother and school friend, and the book grew from there. All told, there are four mother–daughter pairs. Evaristo believes her background as an actress (in her twenties) allowed her to almost become these characters and write them from the inside, so that even though the chapters are written in the third person they feel like first-person narratives. The 12 flawed, complex main characters are “equal protagonists,” she insisted. Her aim was “to explore multiplicity to address our invisibility.” She characterizes the book’s style as “fusion fiction”: an accessible take on the experimental novel, with unorthodox, free-flowing language that allows readers to move easily between the different characters’ storylines.

Both Evaristo and Makumbi admitted to having a complicated relationship with feminism, Evaristo because the feminism of the 1980s did not seem to include black women and Makumbi because the fight for equality is still ongoing in patriarchal African societies like her native Uganda’s. Evaristo feels that feminism is now more inclusive and, also thanks to the #MeToo movement, there has been a place for her book that may not have been there five or 10 years ago. (The same goes for Makumbi, who has only now found a publisher for her very feminist first novel, which was rejected in the 2000s.) Both authors spoke of the ways in which people are made to feel “Other”: through sex, race and class. Makumbi pointed out that Africans experience a specific racism separate from other blacks in Britain. “I’m not racist, but I draw the line at Africans” is how she caricatured this view.

Makumbi’s novel Kintu is a sprawling family saga that has been compared to Roots, but she has recently released a collection of short stories that focus on Ugandan immigration to Britain between the 1950s and today. She envisioned Manchester Happened as “a letter back home” to tell people what it’s really like to settle in a new country, as well as a chance to reflect on the underrepresented East African immigration experience. Much of the book is drawn from her life, such as working as an airport security officer to fund her creative writing degree. Her mentor recommended that she start writing stories as a way to counterbalance the intensity of Kintu – a chance to see the beginning, middle and end as a simple arc. She assumed short stories would be easier than a novel, yet her first story took her four years to write. It is as if she can only look into her past for brief moments, anyway, she explained, so the story form has been perfect. She has deliberately avoided the negativity of many migration narratives, she said: Things have in fact gone well for her, and we’ve heard about things going wrong many times before.

I’m over halfway through Girl, Woman, Other now, and enjoying it very much – but wondering if its breadth sacrifices some depth. Evaristo acknowledged that she felt a bit less attached to these characters than she has in novels where she followed just one or two characters all the way through. Still, she feels that she knows and understands these women, even if she doesn’t like or approve of all of them. She read excerpts from the sections about Yazz, a feisty and opinionated young woman waiting for her mother’s play to start, and Hattie, a strong-willed 93-year-old from a Northumberland farming family. Makumbi read from two stories, one about a Ugandan couple arriving in Manchester in 1950 and the other set in the airport security area. In the latter the protagonist confiscates a whip from a priest, a funny moment that seems to represent Makumbi’s style – moderator Irenosen Okojie, a Nigerian author, mentioned another notable story from the perspective of a Ugandan street dog newly pampered in Britain. 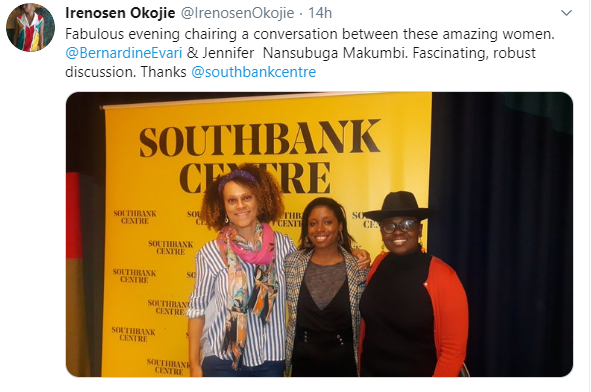 I hope to read Manchester Happened soon, and should be featuring an extract from it next week as part of the Ake Book Festival blog tour. I’ll also finish the Evaristo this week and expect it to be on my Best of 2019 fiction list.