Although I’ve confessed to being generally wary of sequels, and I am scrupulously avoiding this autumn’s other high-profile sequel (you know the one!), I loved Olive Kitteridge enough to continue straight on to Elizabeth Strout’s sequel, Olive, Again, which I thought even better.

I have a soft spot for literature’s curmudgeons – the real-life ones like J. R. Ackerley, Shaun Bythell and Geoff Dyer as well as the fictional protagonists like Dr. James Darke in Rick Gekoski’s debut novel, Cassandra Darke in Posy Simmonds’s graphic novel, Hagar Shipley in The Stone Angel, Hendrik Groen in his two titular Dutch diaries, and Frederick Lothian in Josephine Wilson’s Extinctions. So it’s no surprise that I warmed immediately to Olive Kitteridge, a grumpy retired math teacher in Crosby, Maine. She’s seen and heard it all, and will bluntly say just what she thinks. She has no time for anyone else’s nonsense. 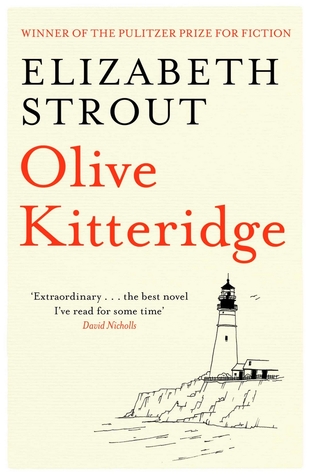 I love our first introduction to her, three pages into the opening piece of this linked short story collection: she dismisses her pharmacist husband Henry’s new employee as “mousy,” and when Henry suggests inviting the girl and her husband over for dinner, snaps, Bartleby-like, “Not keen on it.” The great sadness of Olive’s life is the death of a fellow teacher she never quite had an affair with, but loved in her early forties. The great failure of Olive’s life is not connecting with her only son, Christopher, a podiatrist who marries a woman Olive dislikes and moves to California, then remarries a single mother of two and settles in New York City.

I started this in February and didn’t finish it until this month. I lost momentum after “A Different Road,” in which Olive and Henry are in a hostage situation in the local hospital. This was a darker turn than I was prepared for from Strout – I thought unrequited love and seasonal melancholy was as bleak as she’d go. But I hadn’t read “Tulips” yet, in which we learn that a local boy is in prison for stabbing a woman 29 times.

My least favorite stories were the ones that are about other locals and only mention Olive in passing, perhaps via advice she once gave a student. It almost feels like Strout wrote these as stand-alone stories and then, at her publisher’s behest, inserted a sentence or two so they could fit into a book about Olive. I much prefer the stories that are all about Olive, whether she’s engaging in a small act of rebellion on her son’s wedding day, visiting his new family in New York, or entertaining the prospect of romance some time after Henry’s death.

Olive is a sort of Everywoman; in her loneliness, frustrated desire and occasional depression she’s like us all. I wrote an article on linked short story collections some months ago and pretty much everyone I consulted mentioned Olive as the epitome. I didn’t love the book quite as much as I expected to, but I was very glad to have read it. It won the Pulitzer Prize in 2009.

[Apropos of nothing: this book contains the worst possible nickname for my name that I’ve ever encountered: Bicka-Beck.]

I liked this that little bit more than Olive Kitteridge for a number of reasons:

1) I read it over a matter of days rather than months, so the characters and happenings stayed fresher in my mind and I experienced it more as a novel-in-stories than as a set of discrete stories.

2) Olive, our Everywoman protagonist, approaches widowhood, decrepitude and death with her usual mixture of stoicism and bad temper. You may hear more about her bowels than you’d like to, but at least Strout is being realistic about the indignities of ageing.

3) Crucially, Olive has started, very late in life, to take a genuine interest in other people, such as her son’s second wife; a local girl who becomes Poet Laureate; and the carers who look after her following a heart attack. “Tell me what it’s like to be you,” she says one day to the Somali nurse who comes over from Shirley Falls. Comparing others’ lives with her own, she realizes she’s been lucky in many ways. Yet that doesn’t make understanding herself, or preparing for death, any easier.

4) There are connections to other Strout novels that made me intrigued to read further in her work. In “Exiles,” Bob and Jim Burgess of The Burgess Boys are reunited in Maine, while in the final story, “Friend,” Olive befriends a new fellow nursing home resident, Isabelle Daignault of Amy and Isabelle.

As with the previous volume, I most liked the stories that stuck close to Olive, and least liked those that are primarily about others in Crosby or Shirley Falls and only mention Olive in passing, such as via a piece of advice she gave to one of her math students several decades ago. Twice Strout goes sexually explicit – a voyeurism situation, and a minor character who is a dominatrix; I felt these touches were unnecessary. Overall, though, these stories are of very high quality. The two best ones, worth seeking out whether you think you want to read the whole book or not, are “The Poet” and “Heart.”

I read an advanced e-copy via NetGalley.

Are you a fan of Elizabeth Strout’s work? Do you plan to read Olive, Again?