I’m sneaking in just in time here, on the very last day of the #20BooksofSummer challenge, with my final three reviews: two novellas, one of them a work of children’s fantasy; and a nature/travel classic that turns into something more like a spiritual memoir.

I’d heard of Garner, a British writer of classic children’s fantasy novels, but never read any of his work until I picked this up from the free bookshop where I volunteer on a Friday. My husband remembers reading Elidor (also a 1990s TV series) as a boy, but I’m not sure Garner was ever well known in America. Perhaps if I’d discovered this right after the Narnia series when I was a young child, I would have been captivated. I did enjoy the rural Welsh setting, and to start with I was intrigued by the setup: curious about knocking and scratching overhead, Alison and her stepbrother Roger find a complete dinner service up in the attic of this house Alison inherited from her late father. Alison becomes obsessed with tracing out the plates’ owl pattern – which disappears when anyone else, like Nancy the cook, looks at them.

I gather that Garner frequently draws on ancient legend for his plots. Here he takes inspiration from Welsh myths, but the background was so complex and unfamiliar that I could barely follow along. This meant that the climactic ‘spooky’ scenes failed to move me. Instead, I mostly noted the period slang and the class difference between the English children and Gwyn, Nancy’s son, who’s forbidden from speaking Welsh (Nancy says, “I’ve not struggled all these years in Aber to have you talk like a labourer”) and secretly takes elocution lessons to sound less ‘common’.

Can someone recommend a Garner book I might get on with better?

The Snow Leopard by Peter Matthiessen (1978)

For two months of 1973, from late September to late November, Matthiessen joined zoologist George Schaller on a journey from the Nepalese Himalayas to the Tibetan Plateau to study Himalayan blue sheep. Both also harbored a hope of spotting the elusive snow leopard.

Matthiessen had recently lost his partner, Deborah Love, to cancer, and left their children behind – at residential schools or with family friends – to go on this spirit-healing quest. Though he occasionally feels guilty, especially about the eight-year-old, his thoughts are usually on the practicalities of the mountain trek. They have sherpas to carry their gear, and they stop in at monasteries but also meet ordinary people. More memorable than the human encounters, though, are those with the natural world. Matthiessen watches foxes hunting and griffons soaring overhead; he marvels at alpine birds and flora.

The writing is stunning. No wonder this won a 1979 National Book Award (in the short-lived “Contemporary Thought” category, which has since been replaced by a general nonfiction award). It’s a nature and travel writing classic. However, it took me nearly EIGHTEEN MONTHS to read, in all kinds of fits and starts (see below), because I could rarely read more than part of one daily entry at a time. I struggle with travel narratives in general – perhaps I think it’s unfair to read them faster than the author lived through them? – but there’s also an aphoristic density to the book that requires unhurried, meditative engagement. 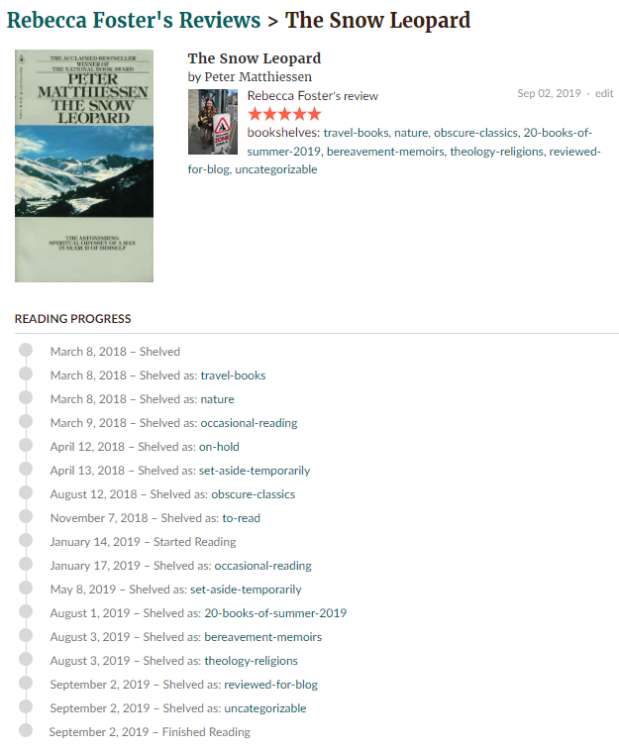 The mountains in their monolithic permanence remind the author that he will die. The question of whether he will ever see a snow leopard comes to matter less and less as he uses his Buddhist training to remind himself of tenets of acceptance (“not fatalism but a deep trust in life”) and transience: “In worrying about the future, I despoil the present”; what is this “forever getting-ready-for-life instead of living it each day”? I’m fascinated by Buddhism, but anyone who ponders life’s deep questions should get something out of this.

Who Will Run the Frog Hospital? by Lorrie Moore (1994)

Thanks to Cathy for reminding me about this one – I had intended to make it one of my novellas for November, but as I was scrambling around to find a last couple of short books to make up my 20 I thought, “Frog! hey, that fits”* and picked it up.

Oddly, given that Moore is so well known for short stories, I’ve only ever read two of her novels (the other was A Gate at the Stairs). Berie Carr lives just over the border from Quebec in Horsehearts, a fictional town in upstate New York. She and her best friend Sils are teenagers at the tail end of the Vietnam War, and work at Storyland amusement park on the weekends and during the summer. When Sils gets into trouble, Berie starts pocketing money from the cash register to help her out, but it will only be so long until she gets caught and the course of her life changes.

Berie is recounting these pivotal events from adulthood, when she’s traveling in Paris with her husband, Daniel. There are some troubling aspects to their relationship that don’t get fully explored, but that seems to be part of the point: we are always works in progress, and never as psychologically well as we try to appear. I most enjoyed the book’s tone of gentle nostalgia: “Despite all my curatorial impulses and training, my priestly harborings and professional, courtly suit of the past, I never knew what to do with all those years of one’s life: trot around in them forever like old boots – or sever them, let them fly free?”

*There are a few literal references to frogs (as well as the understood slang for French people). The title phrase comes from a drawing Sils makes about their mission to find and mend all the swamp frogs that boys shoot with BB guns. Berie also remarks on the sound of a frog chorus, and notes that two decades later frogs seem to be disappearing from the earth. In both these cases frogs are metaphors for a lost innocence. “She has eaten the frog” is also, in French, a slang term for taking from the cash box.

I also had three DNFs that I managed to replace in time.

(I managed the first 36 pages.) Do you have a friend who’s intimidatingly sharp, whose every spoken or written line leaps from wordplay to a joke to an allusion to a pun? That’s how I felt about Hollow Kingdom. It’s so clever it’s exhausting. 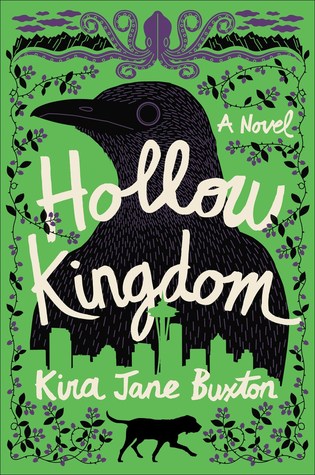 I wanted to read this because I’d heard it’s narrated by a crow. S.T. (Shit Turd) is an American Crow who lives with an electrician, Big Jim, in Seattle, along with Dennis the dumb bloodhound. One day Jim’s eyeball pops out and he starts acting crazy and spending all his time in the basement. On reconnaissance flights through the neighborhood, S.T. realizes that all the humans (aka “MoFos” or “Hollows”) are similarly deranged. He runs into a gang of zombies when he goes to the Walgreens pharmacy to loot medications. Some are even starting to eat their pets. (Uh oh.)

We get brief introductions to other animal narrators, including Winnie the Poodle and Genghis Cat. An Internet-like “Aura” allows animals of various species to communicate with each other about the crisis. I struggle with dystopian and zombie stuff, but I think I could make an exception for this. Although I do think it’s overwritten (one adverb and four adjectives in one sentence: “We left slowly to the gentle song of lugubrious paw pads and the viscous beat of crestfallen wings”), I’ll try it again someday.

Gould’s Book of Fish: A Novel in Twelve Fish by Richard Flanagan: I read the first 164 pages last year before stalling; alas, I could make no more headway this summer. It’s an amusing historical pastiche in the voice of a notorious forger and counterfeiter who’s sentenced to 14 years in Van Diemen’s Land. I could bear only so much of this wordy brilliance, and no more.

Tisala by Richard Seward Newton: I guess I read the blurb and thought this was unmissable, but I should have tried to read a sample or some more reviews of it. I got to page 6 and found it so undistinguished and overblown that I couldn’t imagine reading another 560+ pages about a whale.

For next year, I’m toying with the idea of a food and drink theme. Once again, this would include fiction and nonfiction that is specifically about food but also slightly more cheaty selections that happen to have the word “eats” or “ate” or a potential foodstuff in the title, or have an author whose name brings food to mind. I perused my shelf and found exactly 20 suitable books, so that seems like a sign! (The eagle-eyed among you may note that two of these were on my piles of potential reads for this summer, and two others on last summer’s. When will they ever actually get read?!)

Alternatively, I could just let myself have completely free choice from my shelves. My only non-negotiable criterion is that all 20 books must be ones that I own, to force me to get through more from my shelves (even if that includes review copies). 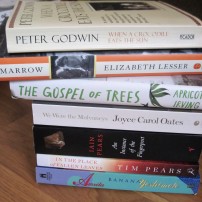 How did you fare with your summer reading?