While very different, these three books tie together nicely with their themes of the hunger for food, adventure and/or love. 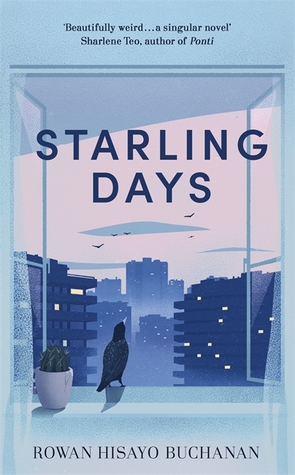 Buchanan’s second novel reprises many of the themes from her first, Harmless Like You, including art, mental illness, and having one’s loyalties split across countries and cultures. Oscar and Mina have been together for over a decade, but their marriage got off to a bad start six months ago: on their wedding night Mina took an overdose, and Oscar was lucky to find her in time. The novel begins and ends with her contemplating suicide again; in between, Oscar takes her from New York City to England, where he grew up, for a change of scenery and to work on getting his father’s London flats ready to sell. For Mina, an adjunct professor and Classics tutor, it will be labeled a period of research on her monograph about the rare women who survive in Greek and Roman myth. But when work for his father’s Japanese import company takes Oscar back to New York, Mina is free to pursue her fascination with Phoebe, the sister of Oscar’s childhood friend.

Both Oscar and Mina have Asian ancestry and complicated, dysfunctional family histories. For Oscar, his father’s health scare is a wake-up call, reminding him that everything he has taken for granted is fleeting, and Mina’s uncertain mental and reproductive health force him to face the fact that they might never have children. Although I found this less original and compelling than Buchanan’s debut, I felt true sympathy for the central couple. It’s a realistic picture of marriage: you have to keep readjusting your expectations for a relationship the longer you’re together, and your family situation is inevitably going to have an impact on how you envision your future. I also admired the metaphors and the use of color.

The title is, I think, meant to refer to a sort of time outside of time when wishes can come true; in Mina’s case that’s these few months in London. Bisexuality is something you don’t encounter too often in fiction, so I guess that’s reason enough for it to be included here as a part of Mina’s story, though I wouldn’t say it adds much to the narrative. If it had been up to me, instead of birds I would have picked up on the repeated peony images (Mina has them tattooed up her arms, for instance) for the title and cover.

Hungry: Eating, Road-Tripping, and Risking It All with the Greatest Chef in the World by Jeff Gordinier

Noma, René Redzepi’s restaurant in Copenhagen, Denmark, has widely been considered the best in the world. In 2013, though, it suffered a fall from grace when some bad mussels led to a norovirus outbreak that affected dozens of customers. Redzepi wanted to shake things up and rebuild Noma’s reputation for culinary innovation, so in the four years that followed he also opened pop-up restaurants in Tulum, Mexico and Sydney, Australia. Journalist Jeff Gordinier, food and drinks editor at Esquire magazine, went along for the ride and reports on the Noma team’s adventures, painting a portrait of a charismatic, driven chef. For foodies and newbies alike, it’s a brisk, delightful tour through world cuisine as well as a shrewd character study. (Full review coming soon to BookBrowse.)

“What could violate social convention more than women coming together to indulge their hunger and take up space?” Roberta and Stevie become instant besties when Stevie is hired as an intern at the fashion website where Roberta has been a writer for four years. Stevie is a would-be artist and Roberta loves to cook; they decide to combine their talents and host Supper Clubs that allow emotionally damaged women to indulge their appetites. The pop-ups take place at down-at-heel or not-strictly-legal locations, the food is foraged from dumpsters, and there are sometimes elaborate themes and costumes. These bacchanalian events tend to devolve into drunkenness, drug-taking, partial nudity and food fights.

The central two-thirds of the book alternates chapters between the present day, when Roberta is 28–30, and her uni days. I don’t think it can be coincidental that Roberta and Stevie are both feminized male names; rather, we are meant to ask to what extent all the characters have defined themselves in terms of the men in their lives. For Roberta, this includes the father who left when she was seven and now thinks he can send her chatty e-mails whenever he wants; the fellow student who raped her at uni; and the philosophy professor she dated for ages even though he treated her like an inconvenient child. Supper Club is performance art, but it’s also about creating personal meaning when family and romance have failed you.

I was slightly disappointed that Supper Club itself becomes less important as time goes on, and that we never get closure about Roberta’s father. I also found it difficult to keep the secondary characters’ backstories straight. But overall this is a great debut novel with strong themes of female friendship and food. Roberta opens most chapters with cooking lore and tips, and there are some terrific scenes set in cafés. I suspect this will mean a lot to a lot of young women. Particularly if you’ve liked Sweetbitter (Stephanie Danler) and Friendship (Emily Gould), give it a taste.

With thanks to Sapphire Rees of Penguin for the proof copy for review.

Have you read any other July releases you would recommend?