The wedding of a college friend – who I calculated I’ve known at least half my life – was the excuse we needed to book a trip back to the States for the last two weeks of May. Along with the classy nuptials in the Fell’s Point area of Baltimore, we enjoyed a day’s sightseeing in Philadelphia, a couple of outings to watch birds and other wildlife on Cape May (a migration hotspot in New Jersey), two meet-ups with other friends, and plenty of relaxation time with my mom and sister, including a Memorial Day picnic at my mom’s retirement community and a tour of Antietam Battlefield. It was much hotter than anticipated, including some days in the high 80s or even 90s, and the hayfever, ticks and mosquitoes were bad, too, but we survived.

Shorebirds at Cape May 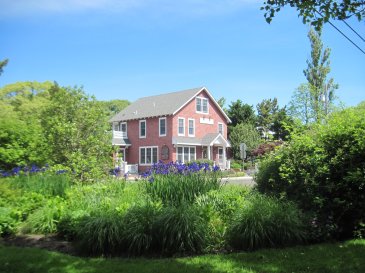 A park on Cape May

While back in Maryland I continued the intermittent downsizing process I’ve been going through for a while now. After being on the market for nearly a year, my family home finally sold and went to closing while we were over there. So that provided a scrap of closure, but my current estrangement from my father (we don’t even know where he’s living) means there’s a lot of continuing uncertainty.

In any case, I managed to reduce the number of boxes I’m storing with my sister from 29 to 20 by recycling lots of my old schoolwork, consolidating my mementos, reselling one box of books and donating another, donating a box of figurines and decorative bottles to a thrift store, displaying some at my mom’s place, giving away a few trinkets to a friend’s kids, and packing a bunch of stuff – photo albums and decorations as well as 64 books – in our various suitcases and hand luggage to take back to the UK.

And I also acquired more books, of course! A whopping 46 of these were free: eight review copies were waiting for me at my mom’s place; three were from the outdoor free bin at 2nd & Charles, a secondhand bookstore; one was found in a Little Free Library near our friends’ place in New Jersey (Emerald City by Jennifer Egan, not pictured); and the rest were from The Book Thing of Baltimore, a legendary volunteer-run free bookshop. I mostly raided the biography section for an excellent selection of women’s life writing; the fiction is unalphabetized so harder to find anything in, but I picked up a few novels, too. My only purchases were new (remainder) copies of one novel and one memoir from Dollar Tree. Total book spending on the trip: just $2.12.

Two that I’d already started but finished on the plane ride over:

Three review books that will be featuring here in the near future: 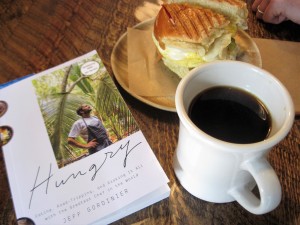 I also read the first half or more of: The Music Shop by Rachel Joyce, my June book club book; Hungry by Jeff Gordinier, a journalist’s travelogue of his foodie journeys with René Redzepi of Noma fame, coming out in July; and the brand-new novel In West Mills by De’Shawn Charles Winslow – these last two are for upcoming BookBrowse reviews.

But the book I was most smug to have on my reading list for the trip was the recent novel Cape May by Chip Cheek. What could be more perfect for reading on location? I asked myself. Unfortunately, it stood out for the wrong reasons. In October 1957 a young pair of virgins, Effie and Henry, travel from Georgia to New Jersey for an off-season honeymoon in her uncle’s vacation home. They’re happy enough with each other but underwhelmed with the place (strangely, this matched my experience of Cape May), and even consider going home early until they fall in with Clara, a friend of Effie’s cousin; Clara’s lover, Max; and Max’s younger sister, Alma. Effie and Henry join the others for nightly drunken revelry.

[SPOILERS!] As the weeks pass Effie, ill and dejected, almost seems to disappear as Cheek delves into Henry’s besotted shenanigans, described in unnecessarily explicit sexual detail. When Effie makes a bid or two for her own sexual freedom late on, it only emphasizes the injustice of spending so much time foregrounding Henry’s perspective. Despite the strength of the period atmosphere and seaside location, this ends up being dull and dated. If you’re after a typically ‘trashy’ beach read and don’t mind lots of sex scenes, you may get on with it better than I did.

Vineland, New Jersey was on the way from our friends’ house to Cape May, so we stopped to take my proof copy of Barbara Kingsolver’s Unsheltered to its spiritual home. Alas, Vineland is an utterly boring small American town. However, Mary Treat at least appears on a painted mural on a building on the main street. The Historical Society, where Kingsolver did her research, was closed, but we photographed the outside.

What’s the last book you read ‘on location’? Did it work out well for you?