The Wellcome Book Prize longlist was announced at midnight yesterday morning. From the prize’s website, you can click on any of the six books’ covers, titles or authors for more information. See also Laura’s reactions post. 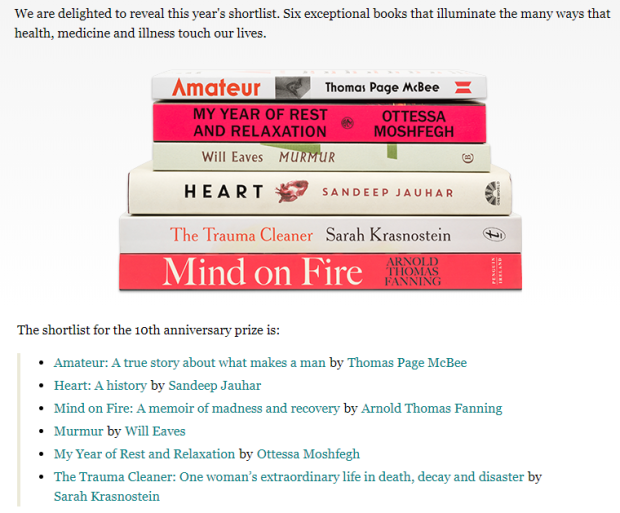 Our shadow panel successfully predicted four of these six, with the remaining two (Fanning and Moshfegh) coming as something of a surprise. It’s a shame This Really Isn’t About You didn’t make it through, as it was a collective favorite of the panel’s, but I’m relieved I now don’t have to read Astroturf and Polio. I’m hoping that the rest of the shadow panel will enjoy Mind on Fire more than I did, and will be willing to give My Year of Rest and Relaxation a go even though it’s one of those Marmite books. 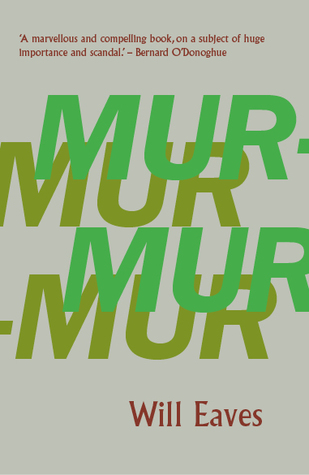 There are four nonfiction books and two novels on the shortlist. Given that novelist Elif Shafak is the chair of judges in this 10th anniversary year, it could make sense for there to be a fiction winner this year; this would also cement an alternating pattern of fiction / nonfiction / fiction, following on from Mend the Living and To Be a Machine. If that’s the case, since Moshfegh’s novel, though a hugely enjoyable satire on modern disconnection and emotional numbness, doesn’t have the strongest health theme, perhaps we will indeed see Murmur take the prize, as Annabel predicted in her review. Alternatively, Amateur feels like a timely take on gender configurations, so maybe, as Laura guesses, it will win. I don’t think I could see the other four winning. (Then again, my panel’s predictions were wildly off base in 2017!)

In a press release Shafak commented on behalf of the judging panel: “The judging panel is very excited and proud to present this astonishing collection of titles, ranging from the darkly comic to the searingly honest. While the books selected are strikingly unique in their subject matter and style, the rich variety of writing also shares much in common: each is raw and brave and inspirational, deepening our understanding of what it truly means to be human through the transformative power of storytelling.”

Murmur is the only one of the six that I haven’t already read; I only read Part I and gave the rest a quick skim. So I resumed it yesterday at Part II. I might not get a chance to revisit the other shortlisted books, but I will be eager to see what the rest of the shadow panel make of the books they haven’t read yet. We will all be taking part in an official Wellcome Book Prize blog tour put on by Midas PR. I’ll also look into whether we can arrange Q&As with the shortlisted authors to run on our blogs in the coming weeks.

I won a limited edition David Shrigley Books Are My Bag tote bag in a Wellcome Collection competition on Twitter. Fittingly, it arrived on the shortlist announcement day!

The Wellcome Book Prize winner will be revealed at an evening ceremony at the Wellcome Collection on Wednesday, May 1st.

Follow along here and on Halfman, Halfbook, Annabookbel, A Little Blog of Books, and Dr. Laura Tisdall for more reviews and predictions.

Which book from the shortlist would you most like to read?