March Reading Plans and Books to Look out For

My apologies if you’ve already heard this story on social media: I was supposed to be in France this past weekend, but for the fourth time in a row we’ve been plagued by transport problems on a holiday: a flat tire in Wigtown, a cancelled train to Edinburgh, a cancelled flight to the States, and now car trouble so severe we couldn’t get on the ferry to Normandy. Though we made it all the way to the ferry port in Poole, our car was by then making such hideous engine noises that it would have been imprudent to drive it any further. We got a tow back to the auto shop where our car is usually serviced and currently await its prognosis. If it can be fixed, we may be able to reschedule our trip for this coming weekend.

The good news about our strange (non-)travel day: I got a jump on my Doorstopper of the Month, Cutting for Stone by Abraham Verghese, a terrific read that reminds me of a cross between Midnight’s Children and The Cider House Rules, and also started Priestdaddy by Patricia Lockwood – though my husband made me stop reading it because I couldn’t stop sniggering while he was trying to make important phone calls about the car. We ended up having a nice weekend at home anyway: going out for Nepalese food, gelato and a screening of The Favorite; doing some gardening and getting bits of work and writing done; and (of course) doing plenty of reading. Waking up with a purring cat on my legs and tucking into a stack of pancakes with maple syrup, I thought to myself, being home is pretty great, too.

What I packed to read in France.

This will be my second time participating in the annual challenge hosted by Cathy of 746 Books. I recently started The Heat of the Day by Elizabeth Bowen and I’m also currently reading two nonfiction books by Irish women: a review copy of Vagina: A Re-Education by Lynn Enright (which releases on March 7th) and the essay collection Notes to Self by Emilie Pine, on my Kindle. I have several other novels to choose from – two of which are set in Ireland rather than by Irish authors – plus a classic travel book by Dervla Murphy.

The second of my ‘assigned’ longlist reviews will be going up on Wednesday. I’m currently reading another three books from the longlist and will post some brief thoughts on them if I manage to finish them before the shortlist announcement on the 19th. At that point I will have read 10 out of the 12 books on the longlist, so should feel pretty confident about making predictions (or at least stating wishes) for what will go through to the next round.

I have two blog tours coming up later in the month, including the official one that’s being run for the Dylan Thomas Prize longlist.

I’ve got a pile-up of review copies that came out in February or are releasing early this month – 9, I think? Some I’ve already read and some are still in progress. So I will be doing my best to group these sensibly and write short reviews, but you may well notice a lot of posts from me.

This Friday marks four years that I’ve been blogging about books!

Here are a few March releases I’ve read that you may want to look out for: 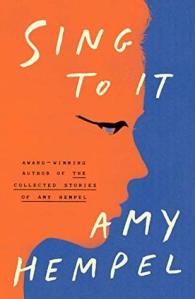 Sing to It: New Stories by Amy Hempel [releases on the 26th]: “When danger approaches, sing to it.” That Arabian proverb provides the title for Amy Hempel’s fifth collection of short fiction, and it’s no bad summary of the purpose of the arts in our time: creativity is for defusing or at least defying the innumerable threats to personal expression. Only roughly half of the flash fiction achieves a successful triumvirate of character, incident and meaning. The author’s passion for working with dogs inspired the best story, “A Full-Service Shelter,” set in Spanish Harlem. A novella, Cloudland, takes up the last three-fifths of the book and is based on the case of the “Butterbox Babies.” (Reviewed for the Pittsburgh Post-Gazette.)

The Cook by Maylis de Kerangal (translated from the French by Sam Taylor) [releases on the 26th]: This is a pleasant enough little book, composed of scenes in the life of a fictional chef named Mauro. Each chapter picks up with the young man at a different point as he travels through Europe, studying and working in various restaurants. If you’ve read The Heart / Mend the Living, you’ll know de Kerangal writes exquisite prose. Here the descriptions of meals are mouthwatering, and the kitchen’s often tense relationships come through powerfully. Overall, though, I didn’t know what all these scenes are meant to add up to. Kitchens of the Great Midwest does a better job of capturing a chef and her milieu.

Holy Envy: Finding God in the Faith of Others by Barbara Brown Taylor [releases on the 12th]: After she left the pastorate, Taylor taught Religion 101 at Piedmont College, a small Georgia institution, for 20 years. This book arose from what she learned about other religions – and about Christianity – by engaging with faith in an academic setting and taking her students on field trips to mosques, temples, and so on. She emphasizes that appreciating other religions is not about flattening their uniqueness or looking for some lowest common denominator. Neither is it about picking out what affirms your own tradition and ignoring the rest. It’s about being comfortable with not being right, or even knowing who is right.

What’s on your reading docket for March?