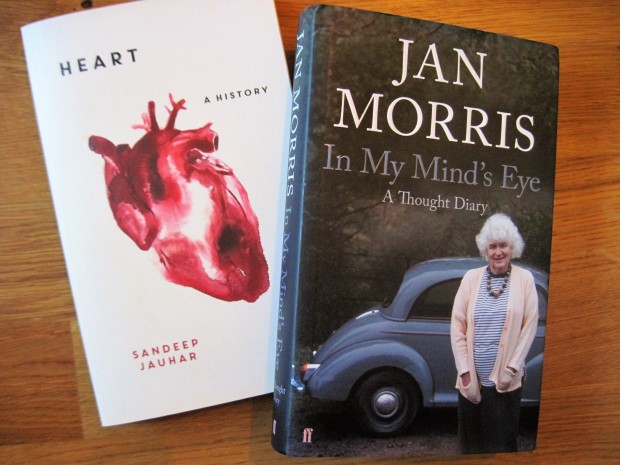 Heart: A History, by Sandeep Jauhar

There could hardly be an author better qualified to deliver this thorough history of the heart and the treatment of its problems. Sandeep Jauhar is the director of the Heart Failure Program at Long Island Medical Center. His family history – both grandfathers died of sudden cardiac events in India, one after being bitten by a snake – prompted an obsession with the heart, and he and his brother both became cardiologists. As the book opens, Jauhar was shocked to learn he had up to a 50% blockage of his own coronary vessels. Things had really gotten personal.

Cardiovascular disease has been the #1 killer in the West since 1910 and, thanks to steady smoking rates and a continuing rise in obesity and sedentary lifestyles, will still affect 60% of Americans. However, the key is that fewer people will now die of heart disease thanks to the developments of the last six decades in particular. These include the heart–lung machine, cardiac catheterization, heart transplantation, and artificial hearts.

Along the timeline, Jauhar peppers in bits of his own professional and academic experience, like experimenting on frogs during high school in California and meeting his first cadaver at medical school. My favorite chapter was the twelfth, “Vulnerable Heart,” which is about how trauma can cause heart arrhythmias; it opens with an account of the author’s days cataloguing body parts in a makeshift morgue as a 9/11 first responder. I also particularly liked his account of being called out of bed to perform an echocardiogram, which required catching a taxi at 3 a.m. and avoiding New York City’s rats.

Maybe I’ve read too much surgical history this year (The Butchering Art by Lindsey Fitzharris and Face to Face by Jim McCaul), though, because I found myself growing fairly impatient with the medical details in the long Part II, which centers on the heart as a machine, and was drawn more to the autobiographical material in the first and final sections. Perhaps I would prefer Jauhar’s first book, Intern: A Doctor’s Initiation.

In terms of readalikes, I’d mention Siddhartha Mukherjee’s The Gene, in which the personal story also takes something of a backseat to the science, and Gavin Francis’s Shapeshifters, which exhibits a similar interest in the metaphors applied to the body. While I didn’t enjoy this quite as much as two other heart-themed memoirs I’ve read, The Sanctuary of Illness by Thomas Larson and Echoes of Heartsounds by Martha Weinman Lear, I still think it’s a strong contender for next year’s Wellcome Book Prize (the judging panel is announced tomorrow!).

“it is increasingly clear that the biological heart is extraordinarily sensitive to our emotional system—to the metaphorical heart, if you will.”
“Who but the owner can say what lies inside a human heart?”

“As a heart-failure specialist, I’d experienced enough death to fill up a lifetime. At one time, it was difficult to witness the grief of loved ones. But my heart had been hardened, and this was no longer that time.”

Heart is published in the UK today, September 27th, by Oneworld. My thanks to the publisher for the proof copy for review.

In My Mind’s Eye: A Thought Diary, by Jan Morris

I’ve been an admirer of Jan Morris’s autobiographical and travel writing for 15 years or more. In this diary covering 2017 into early 2018, parts of which were originally published in the Financial Times and the Welsh-language literary newspaper O’r Pedwar Gwynt, we get a glimpse into her life in her early nineties. It was a momentous time in the world at large but a fairly quiet and reflective span for her personally. Though each day’s headlines seem to herald chaos and despair, she’s a blithe spirit – good-natured about the ravages of old age and taking delight in the routines of daily one-mile walks down the lane and errands in local Welsh towns with her beloved partner Elizabeth, who’s in the early stages of dementia.

There are thrilling little moments, though, when a placid domestic life (a different kind of marmalade with breakfast each day of the week!) collides with exotic past experiences, and suddenly we’re plunged into memories of travels in Swaziland and India. Back when she was still James, Morris served in World War II, was the Times journalist reporting from the first ascent of Everest, and wrote a monolithic three-volume history of the British Empire. She took her first airplane flight 70 years ago, and is nostalgic for the small-town America she first encountered in the 1950s. Hold all that up against her current languid existence among the books and treasures of Trefan Morys and it seems she’s lived enough for many lifetimes.

There’s a good variety of topics here, ranging from current events to Morris’s love of cats; I particularly liked the fragments of doggerel. However, as is often the case with diaries, read too many entries in one go and you may start to find the sequence of (non-)events tedious. Each piece is only a page or two, so I tried never to read many more than 10 pages at a time. Even so, I noticed that the plight of zoo animals, clearly a hobby-horse, gets mentioned several times. It seemed to me a strange issue to get worked up about, especially as enthusiastic meat-eating and killing mice with traps suggest that she’s not applying a compassionate outlook consistently.

In the end, though, kindness is Morris’s cardinal virtue, and despite minor illness, telephone scams and a country that looks to be headed to the dogs, she’s encouraged by the small acts of kindness she meets with from friends and strangers alike. Like Diana Athill (whose Alive, Alive Oh! this resembles), I think of Morris as a national treasure, and I was pleased to spend some time seeing things from her perspective.

“If I set out in the morning for my statutory thousand daily paces up the lane, … I enjoy the fun of me, the harmless conceit, the guileless complexity and the merriment. When I go walking in the evening, on the other hand, … I shall recognize what I don’t like about myself – selfishness, self-satisfaction, foolish self-deceit and irritability. Morning pride, then, and evening shame.” (from Day 99)

In My Mind’s Eye was published by Faber & Faber on September 6th. My thanks to the publisher for the free copy for review.