After five years away, we finally made it back to Greenbelt, a progressive Christian summer arts festival held on the grounds of Boughton House, on the Bank Holiday. The festival is a mixture of talks, music, performances and more, and given how much we’d paid and how far we’d traveled just for the one day, we tried to pack in as much as possible.

We started the day with “Beyond Forgiveness,” a presentation by Jo Berry and Pat Magee. Berry’s father, a Tory MP, was killed when the IRA bombed the Conservative Party conference in Brighton in 1984. Magee spent 14 years in prison for his role in the bombing. When he got out of jail, he met Berry at her request and they talked and listened to each other for several hours. For the first time, Magee said, he could see her father as a real person and realized that the IRA had been just as guilty of dehumanizing and misrepresenting people as the English were. Berry, too, felt that “I’d met my enemy and seen his humanity.” The two have now shared a stage more than 200 times, speaking about the value of empathy in healing broken relationships while also addressing imbalances of power that lead to violence.

To my surprise, cookery displays and musical comedy seemed to be the order of the day. A model kitchen is a new addition to the festival, giving celebrity chefs hour-long sessions to demonstrate a particular dish. Jack Monroe, promoting her new book Cooking on a Bootstrap, cooked a sausage lasagna. She made us all laugh with her idea of “the inverse sausage fallacy” – the cheaper a sausage is, the better it tastes because of all the salt, sugar and spices added to cheaper bits of meat. She started writing recipes when she was a single mother on the dole, and so she encouraged audience members to donate nice things you would like to eat, as well as everyday hygiene products, to food banks. For a “What Vegans Eat” session, Brett Cobley (aka EpiVegan) made a pea and asparagus risotto and answered questions about protein sources, egg replacements, plant milks and harder-to-find ingredients. 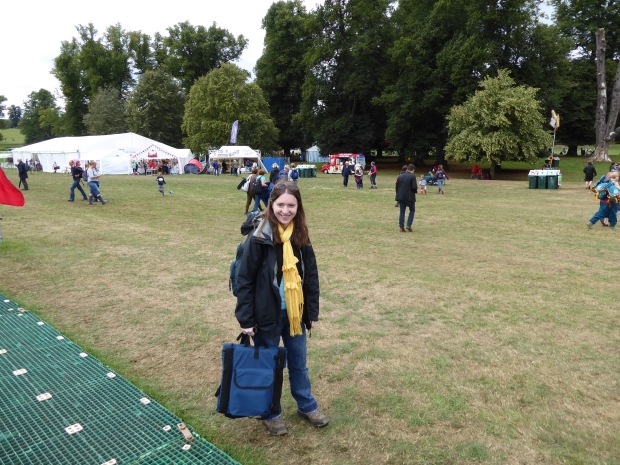 Uproarious musical comedy came in the form of Harry & Chris, who made up impromptu raps about New Year’s Day, the Teletubbies and phobias, and Flo & Joan, who sang about divorce statistics, unnecessary inventions for women, and sex robots (the show was fairly crude and came with an 18+ warning). The overall musical highlight of the day was Duke Special, a Greenbelt favorite we’ve seen play quite a number of times now. His pop combines his smooth Belfast tenor with music hall and Big Band stylings, and his songs are often drawn from poetry and 1920s–40s songbooks. His latest project, Hallow, is a beautiful set of Michael Longley poems set to music. He played “Another Wren” and “Emily Dickinson” from that album, various covers (including two bizarre ditties by Ivor Cutler), and crowd favorites “Last Night I Nearly Died,” “Freewheel” and “Our Love Goes Deeper than This.” We also sampled performances by Martyn Joseph, Wallis Bird and CC Smugglers.

Duke Special was a good bridge between music and literature. From the literature program I also saw Rabbi Jonathan Wittenberg speak on “Things My Dog Has Taught Me about Being a Better Human,” the title of his recent book. (His dog Mitzpah had a special dispensation to join him on stage; no animals are allowed on site otherwise!) The rabbi spoke about lessons in listening, attention, trust and seizing the moment. Mitzi and his previous dog Safi have also given him a connection with the rest of creation. Although he lives in the London suburbs and has an inner-city synagogue, they have accompanied him on long walks in Scotland and Germany. Wittenberg was a warm and witty speaker and I very much liked the sound of his book. It could make a good follow-up to The Power of Dog.

My other festival highlight was Rebecca Stott, in conversation with Radio 4 presenter Malcolm Doney. I read her Costa Prize-winning memoir In the Days of Rain: A daughter. A father. A cult in April and it’s been one of my stand-out reads of the year so far. The book conveys a huge amount of information about the Exclusive Brethren and Stott’s family history but never loses sight of what is most important: what it was like to be in a cult and have your life defined by its rules and its paranoia about the outside world. Stott remembers 6 a.m. Sunday communion services and her constant terror of being left behind in the Rapture.

Rebecca Stott reading from In the Days of Rain.

Unfortunately, the talk didn’t add much to my experience of reading her book. The interviewer, catering to those who haven’t read the book yet, led her through her whole story bit by bit, and because I’d read it fairly recently it was all familiar. However, Stott spoke wonderfully and was full of wry compassion for her younger self. I was most interested to hear about the book’s aftermath: she’s received 300 letters from ex-Brethren that her daughter is transcribing to send to a Brethren Church archive in Manchester. When asked during a Q&A where she sees cult tendencies today, she mentioned Trump supporters! 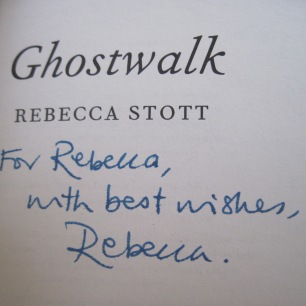 Whereas I read In the Days of Rain from the library, I happen to own two Stott books I haven’t read yet, so I cheekily brought along my paperback of Ghostwalk for signing. She was intrigued to see the older cover design and told me she thinks the prose style in her debut novel is much richer than in Rain, and she hopes I’ll like it. I thanked her for the talk, told her how much I’d enjoyed her memoir, and recommended her two books vaguely about cults: Educated by Tara Westover, which she already knew well, having done some events with Westover, and The Incendiaries by R.O. Kwon, which was new to her (my blog tour review is coming up on Monday). I caught myself using the word “brilliant” three times in speaking about Stott’s work and these other books – nuance and vocabulary alike clearly go out the window when nervously speaking to admired authors!

Some readers of this blog would have been delighted by the event I rushed to straight after Stott’s talk: Jon McGregor giving readings from Reservoir 13, with Sigur Rós-esque backing and interlude music from Haiku Salut. I heard about the police reconstruction with actors from Manchester, and collecting bilberries on the heath in August. Unfortunately, I found it just as dull read aloud as I did when I tried the book last year, and I left early.

During bits of down time I pulled out a Katherine Mansfield story collection I found in a charity shop last week and read “Bank Holiday” and “The Garden Party.” The former is a very short piece whose carnival atmosphere rises to a note of indeterminate striving:

“And up, up the hill come the people, with ticklers and golliwogs, and roses and feathers. Up, up they thrust into the light and heat, shouting, laughing, squealing, as though they were being pushed by something, far below, and by the sun, far ahead of them – drawn up into the full, bright, dazzling radiance to…what?”

It was my first time reading the famous “The Garden Party,” which likewise moves from a blithe holiday mood into something weightier. The Sheridans are making preparations for a lavish garden party dripping with flowers and food. Daughter Laura is dismayed when news comes that a man from the cottages has been thrown from his horse and killed, and thinks they should cancel the event. Everyone tells her not to be silly; of course it will go on as planned. The story ends when, after visiting his widow to hand over leftover party food, she unwittingly sees the man’s body and experiences an epiphany about the simultaneous beauty and terror of life. “Don’t cry,” her brother says. “Was it awful?” “No,” she replies. “It was simply marvellous.” Mansfield is especially good at first and last paragraphs. I’ll read more by her someday.

How did you all spend your Bank Holiday? / How do you plan to spend Labor Day?

Did any reading get done?