I fly back to the UK later today after a fairly busy few weeks of packing, unpacking, and more packing as I got my mom settled into her new home and dealt with the substantial amount of stuff I still had in storage with my parents. I’ll post later in the week about book culling versus acquisitions. For now, here’s a quick look at the books by women I’ve been reading in print towards my summer challenge: everything from a memoir of infertility to a perfectly summery novel set at a Vermont lake resort. 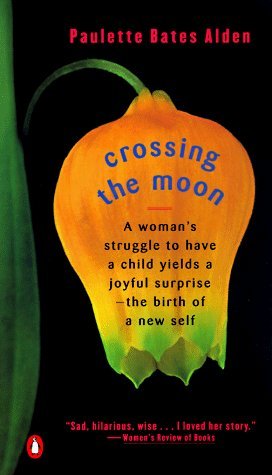 I first read this nearly four years ago (you can find my initial review in an early blog post that rounds up three of Alden’s works), and was moved to reread it this summer as a follow-up to Sheila Heti’s Motherhood. The book focuses on Alden’s uncertainty about having children all the way up to her late thirties, when she underwent three years of somewhat desperate, and ultimately unsuccessful, infertility treatment. “From the very start, I had seen writing and motherhood as mutually exclusive,” she writes, an attitude very similar to Heti’s. Yet she feared missing out on the meaning and love a child could bring to her life.

More broadly, the memoir is about the search to integrate the different aspects of a life – including family history and the fateful decisions that seem to have been made for you – into a realistic vision of the future. I didn’t find the book quite as profound this time around, but I noticed that I marked many of the same passages I did four years ago, about the dearth of childless role models and the struggle to accept the life that has become yours, even if it’s not what you predicted for yourself. That proves how influential and comforting it’s been for me.

“About the closest I can come to imagining what it would be like to have a child is with our cat, Cecil. For Cecil I feel the most delicious love, but also the most anxious responsibility.”

“It came to me that it really was a choice between two good things—having a child and not having a child. Our life without a child seemed good to me. I caught a glimpse that it was what was right for us, for the best. But who can say what is ‘best’? Maybe it’s possible to get to a place where what is best is simply what is.”

Passion and Affect by Laurie Colwin (1974) 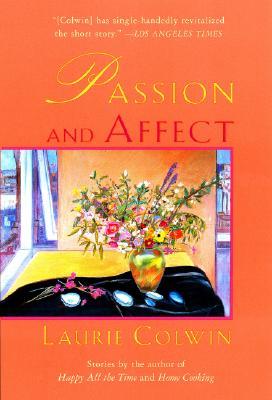 I mostly know Colwin as a food writer, but she also published fiction. This subtle story collection turns on quiet, mostly domestic dramas: people falling in and out of love, stepping out on their spouses and trying to protect their families. I didn’t particularly engage with the central two stories about cousins Vincent and Guido (characters from her novel Happy All the Time, which I abandoned a few years back), but the rest more than made up for them.

Several stories reveal the hidden depths of a character who’s only been a bit player in a protagonist’s life: a family friend who suddenly commits suicide, a Hispanic cook who has a rich boyfriend, a widowed piano teacher whose young student’s accomplishments buoy him up, and a supermarket employee whose ordinary life doesn’t live up to the fantasy background her manager, an art history PhD student, dreams up for her. In “The Water Rats” and “Wet,” water symbolizes all that we can’t control and understand, whether that’s our family’s safety or the inner life of a spouse.

Colwin writes funny, sharp descriptions, like “he was greeted by a young man wearing his hair in the manner of John Donne, a three-piece suit, and cowboy boots” and “she windowshopped, staring with rapt depression at rows of mannikins in glossy trousers.”

“She was three years married and when she looked at herself in the mirror, she did not see that she had become any more serious, any less young and heedless, or any more willing to get down to what Richard called ‘the things of life.’ He was right when he said that she had not made up her mind about anything.” 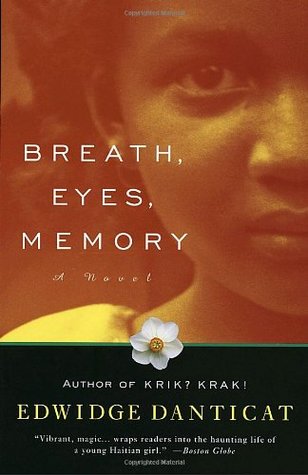 Like her protagonist, Sophie Caco, Danticat was raised by her aunt in Haiti and reunited with her parents in the USA at age 12. As Sophie grows up and falls in love with an older musician, she and her mother are both haunted by sexual trauma that nothing – not motherhood, not a long-awaited return to Haiti – seems to heal. I loved the descriptions of Haiti (“The sun, which was once god to my ancestors, slapped my face as though I had done something wrong. The fragrance of crushed mint leaves and stagnant pee alternated in the breeze” and “The stars fell as though the glue that held them together had come loose”), and the novel gives a powerful picture of a maternal line marred by guilt and an obsession with sexual purity. However, compared to Danticat’s later novel, Claire of the Sea Light, I found the narration a bit flat and the story interrupted – thinking particularly of the gap between ages 12 and 18 for Sophie. (Another Oprah’s Book Club selection.)

“She cannot stay out of duty. The things one does, one should do out of love.”

“I knew my hurt and hers were links in a long chain and if she hurt me, it was because she was hurt, too.” 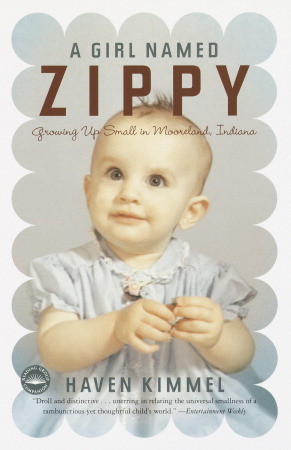 Maybe you grew up in or near a town like Mooreland, Indiana (population 300). Born in 1965 when her brother and sister were 13 and 10, Kimmel was affectionately referred to as an “Afterthought” and nicknamed “Zippy” for her boundless energy. Gawky and stubborn, she pulled every trick in the book to try to get out of going to Quaker meetings three times a week, preferring to go fishing with her father. The short chapters, headed by family or period photos, are sets of thematic childhood anecdotes about particular neighbors, school friends and pets. I especially loved her parents: her mother reading approximately 40,000 science fiction novels while wearing a groove into the couch, and her father’s love of the woods (which he called his “church”) and elaborate preparations for camping trips an hour away.

The tone is light-hearted despite hints of unpleasantness around town: open hostility towards people of color, a lecherous music teacher and a kid who abused animals. The more exaggerated stories are reminiscent of David Sedaris’s work – did she really cut hippies’ hair in exchange for an Irish Setter puppy?! Mostly, the book made me think about my mother’s small-town childhood versus my own suburban one, and how I would try to put all my early experiences together in a funny, nostalgic but honest way. It wouldn’t be easy at all, which makes Kimmel’s a noteworthy achievement.

“I figure heaven will be a scratch-and-sniff sort of place … I will ask for the smell of my dad’s truck, which was a combination of basic truck (nearly universal), plus his cologne (Old Spice), unfiltered Lucky Strikes, and when I was very lucky, leaded gasoline.”

“Mom used to say that my dad was a mountain man, which was obviously just a figure of speech, since most of Indiana is flat as a pancake. Her point was that Dad is a wild man, which was certainly true.” 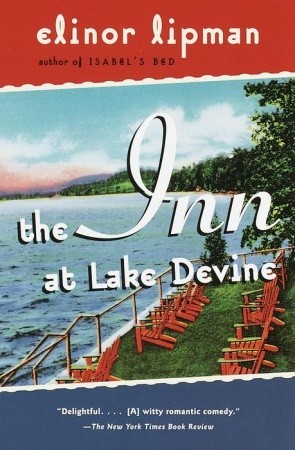 This was a breezy, delightful novel perfect for summer reading. In 1962 Natalie Marx’s family is looking for a vacation destination and sends query letters to various Vermont establishments. Their reply from the Inn at Lake Devine (proprietress: Ingrid Berry) tactfully but firmly states that the inn’s regular guests are Gentiles. In other words, no Jews allowed. The adolescent Natalie is outraged, and when the chance comes for her to infiltrate the Inn as the guest of one of her summer camp roommates, she sees it as a secret act of revenge.

In fact, in the years to come, after she trains as a chef, Natalie will become further entwined in the inn’s life, helping the family recover from a tragedy, falling in love with one of the Berry sons, and unwittingly contributing to a livelihood-threatening accident. Natalie’s voice drew me in right from the start. Lipman’s comedies of manners have been compared to Jane Austen’s, and you can see that likeness in the witty dialogue. I’ll certainly read more by her.

Without Reservations: The Travels of an Independent Woman by Alice Steinbach (2000) 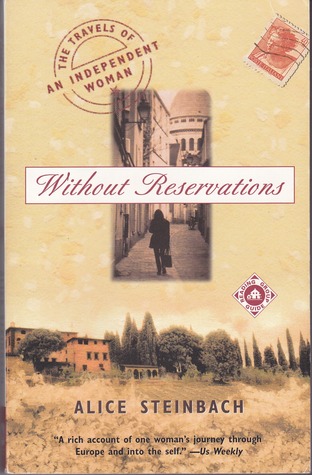 In 1993 Steinbach, then in her fifties, took a sabbatical from her job as a Baltimore Sun journalist to travel for nine months straight in Paris, England and Italy. As a divorcee with two grown sons, she no longer felt shackled to her Maryland home and wanted to see if she could recover a more spontaneous and adventurous version of herself and not be defined exclusively by her career. Her innate curiosity and experience as a reporter helped her to quickly form relationships with other English-speaking tourists, which was an essential for someone traveling alone.

I enjoyed spotting familiar sites I’ve visited, but I don’t think you need to know these countries or even have a particular interest in them to appreciate the book. Whether she’s attending a swanky party or nearly getting mugged, Steinbach is an entertaining and unpretentious tour guide. Her attitude is impressive, too: “I had surprised myself this year by jumping in to reshape my life before life stepped in to reshape it for me.” You might not be willing to give up your normal existence for nine months, but I suspect that this travel memoir might make you consider how you could be more daring in your daily life.