I managed to miss Marlena when it first came out last year; luckily, I had another chance at reading it when it was released in paperback a couple of months ago. It bears some thematic similarities to Emma Cline’s The Girls, Rosalie Knecht’s Relief Map, Andrée Michaud’s The Last Summer, Julianne Pachico’s The Lucky Ones and especially Emily Fridlund’s History of Wolves, but Marlena is a cut above. It’s basically a flawless debut, one I can’t recommend too highly. Occasionally I weary of writing straightforward reviews – let’s be honest, you get tired of reading them, too – so I’m returning to a format I last used for my review of The Animators and pulling out four reasons why you must be sure not to miss this book.

Probably most teenagers think where they live is boring. But there aren’t words for the catastrophic dreariness of being fifteen in northern Michigan at the tail end of winter, when you haven’t seen the sun in weeks and the snow won’t stop coming and there’s nowhere to go and you’re always cold and everyone you know is broke…

I looked up to Marlena—she was tough and beautiful and I never once thought she wasn’t in control. … Even at fifteen I wasn’t dumb enough to glamorize Marlena’s world, the poverty, the drugs that were the fabric of everything, but I was attracted to it all the same. 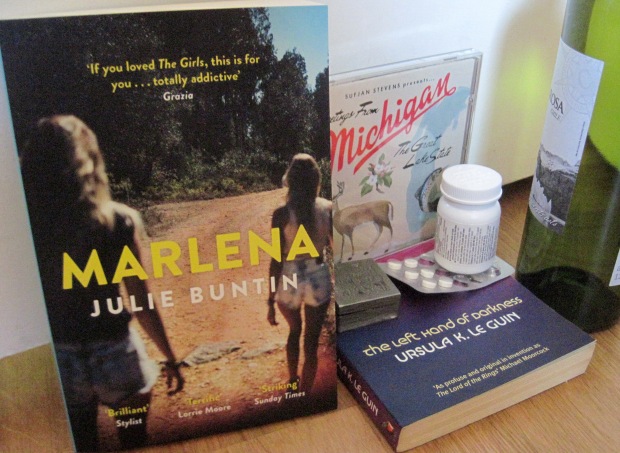 Everything was happening in consequence-less free fall … the two of us made one perfect, unfuckwithable girl. Nothing could hurt us, as long as we weren’t alone.

Those days were so big and electric that they swallowed the future and the past … a difficulty letting go of the past can run in families, like a problematic thyroid.

This is one of those books where the narration is so utterly convincing that you don’t so much read the plot as live it out. I felt no distance between Cat and me. When a first-person voice is this successful, you wonder why an author would ever choose anything else.

Marlena was published in paperback in the UK by Picador on April 19th. My thanks to the publisher for sending a free copy for review.